One of the major milestones covered during the quarter was the execution of binding agreements with 100% owned subsidiary of US-based Peabody Energy Corporation, Peabody (Burton Coal) Pty Ltd, for the acquisition of the Broadmeadow East Coking Coal Project, which contains a 33 Mt resource.

The project is located within undeveloped Mining Lease 70257, and the transaction includes access rights to the New Lenton Joint Venture Coal Handling and Preparation Plant (“CHPP”) as well as the associated Train Load Out Facility (“TLO”). These infrastructure assets are connected by a haul road passing immediately adjacent to ML 70257.

A minimum of 1Mtpa throughput capacity at the CHPP and TLO has been secured by BCB, with the ability to potentially expand this capacity to a total of 2Mtpa, subject to agreement.

Analysis of the washability data has commenced, and results have indicated that despite lower primary yields, coal can be washed at lower density levels to create higher-quality coking coal at ~8.7% ash with CSN as high as seven while producing a secondary high energy thermal coal. 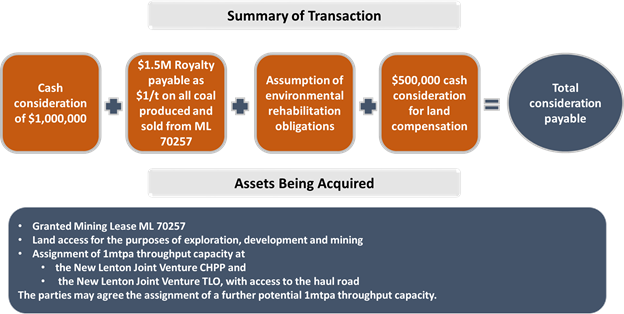 BCB looks forward to engaging with Peabody (Burton Coal) Pty Ltd to conclude the transaction at the earliest and subsequently focus efforts on getting the project shovel ready as soon as possible. Due to the availability of existing regional infrastructure, the project has a relatively low capital intensity and short development timeframe.

Located in the northern Bowen Basin, the Hillalong Coking Coal Project completed the $2.5m Phase 1 exploration program, later to which, Sumitomo Corporation progressed with the Hillalong Joint Venture. This resulted in Sumitomo solidifying a 10% interest in the Project under the following terms:

A total resource of 43 Mt in accordance with the JORC Code has been estimated, of which 19.5 Mt is shallower than 150 m deep. Significantly, the resource area remains open in East and South-West directions, offering opportunities to grow on this maiden resource estimate. 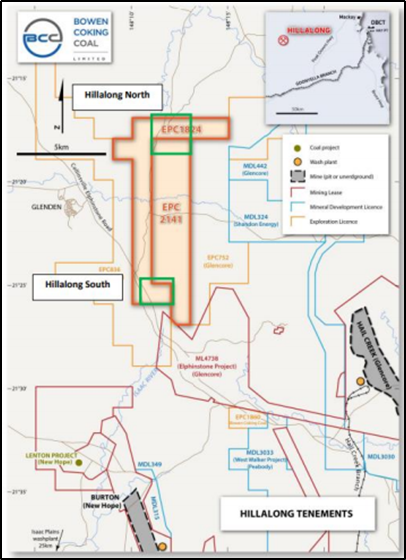 Though site-specific Environmental Authority Application for the Isaac River Project was supposed to be lodged during this quarter, it suffered some unexpected delays due to delayed land access during the wet season.

Notwithstanding the delays, BCB concluded further environmental assessments to ensure adequate coverage of the post wet season conditions, during this time.

The Environmental Authorisation application is now expected to be lodged during the upcoming September quarter.

In addition, a study regarding the regional geology proximate to the Carborough Project was undertaken in June 2020 quarter, and BCB has lodged a tender to the Department of Natural Resources, Mines for an exploration area adjacent to the Project.

BCB expects the result of the tender process later in the upcoming quarter.

In a 360-degree development approach, BCB also saw a valuable addition to its Board during the quarter, BCB appointed Mr Matt Latimore as a Non-Executive Director.

The significant addition to BCB’s Board was made subsequent to the completion of all formal agreements to give effect to the proposed Marketing Joint Venture and Finance Facility with M Resources and receipt of shareholder approval at an Extraordinary General Meeting.

M Resources is a related entity of Mr Latimore (a substantial holder of BCB with 15.93%) and has agreed to offer BCB with up to $15 million finance facility, that is anticipated to be utilised in financing the development of the Isaac River Coking Coal Project, or any other coking coal projects of BCB.

On the funding front, BCB raised a total of $2.25 million (before costs) pursuant to an offer made to unrelated sophisticated and professional investors, of 45,000,000 ordinary fully paid shares at an issue price of $0.05 per share.

Proceeds from the capital raising are planned to be utilised for funding the acquisition and transaction cost of the Broadmeadow East project, related environmental and mining studies, costs of the Placement and to support working capital requirements.

All financials used above are in AUD, unless specified.