Global health technology company, CardieX Limited (ASX:CDX) has experienced a stupendous price rally with a six-month investor return of more than 107% and three-month investor return of 145.45%, as on 20 August 2020. The increase can be attributed to various factors like pharma study contracts with Bayer Ag and other major pharmaceutical companies.

In addition, as a major achievement in its June quarter, CardieX's ATCOR technology got selected for use in the first international clinical trial to evaluate arterial stiffness impact in COVID-19 survivors. The trial has been commissioned by the ARTERY Society.

Let's glance through some current developments that may have increased investors' confidence in the Company.

On 20 August 2020, CardieX, through its subsidiary ATCOR, announced to have entered a new amended agreement with Bayer AG (ETR: BAYN), a global pharmaceutical company. The new amended contract is for the leasing of ATCOR's devices (ATCOR XCEL Systems) and availing an expanded data management services for Bayer's 'AVANTI' trial, increasing the total contract value from US$1.26 million to US$1.68 million.

Term of the contract has also been extended to June 2021 from October 2020, with additional AVANTI Amended Contract revenue to be accrued by the Company in the current FY2021. The AVANTI trial represents one of the two significant ongoing trials for which Bayer has entered into a contract with ATCOR. The other trial is the CONCORD trial. 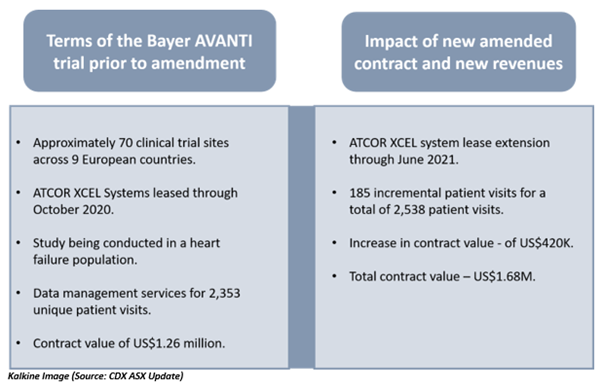 According to the announcement, XCEL device of ATCOR is the only FDA cleared device that measures central aortic waveform and provides reporting on associated clinical data in all adult subjects. Clinicians, research institutions, and pharmaceutical companies use XCEL to monitor critical hemodynamic data while treating patients and during drug trials in various clinical settings and for multiple disease states.

According to CEO & Managing Director, Craig Cooper, the new contract amendment demonstrates the Company's success regarding ongoing business development during the poor economic period and reinstates validation of the exclusive capabilities of its FDA-cleared SphygmoCor® technology that is being actively expanded into wearables, smart devices and other new markets.

In a recent research breakthrough, ATCOR extracted waveforms from PPG sensor, thus enabling the use of its core SphygmoCor® technology in wearables.

The Company is currently aiming at expanding opportunities under the JDA to new markets and other applications, such as the provision of data and related technologies to Mobvoi under a "services & subscription model".

As part of the process of advancing its BP monitor, CardieX programmed and shipped prototype chips to ODM partner, Andon, which will integrate the same into a reference design for a standard brachial BP monitor. In addition, the Company has developed research software that allows collection and preliminary processing of individual BP measurements via a PPG sensor. The Company is collaborating with the Macquarie University to conduct data collection within social distancing guidelines.

The Company recorded total receipts of $1.54 million for June 2020 with a total of $5.11 million for the fiscal year 2020. This growth in receipts was largely backed by winning pharma study contracts with Bayer and other major pharmaceutical companies.

Increased revenue led to an improved operating cash flow with net operating outflows of $220k recorded for the June quarter. CardieX closed FY20 with a strong cash balance of $2.06 million, underpinned by a funding through the June quarter from debt facility and the US PPP funding.

Owing to following events during the month of July, the Company experienced material improvements to its cash position, totalling in excess of $3.7 million. 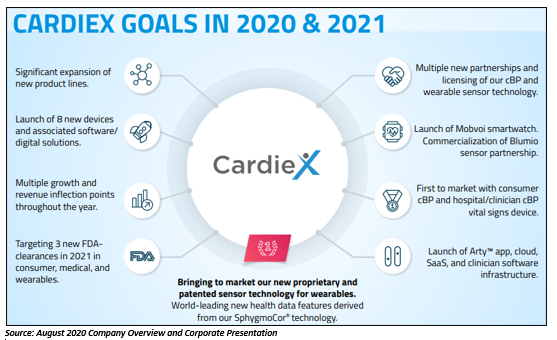