Your guide to Investing in Gold Stocks in a Market Crash - WAF, ALK

Gold knocks the door of the all-time record prices. Gold prices have continued to surge in the first half and are likely to continue the trend over the remaining half of the year as the picture on the raised geopolitical tensions and the virus infected confirmed cases grows to 17.3 million globally on 31 July 2020.

With China choosing the path of aggression against its neighbours including Taiwan, Japan and India and on the global front against Australia and most recently, New Zealand and the United States, the global relations have been impacted with no signs of recovery in the near future. Gold prices traded at US$1976.55 an ounce on 31 July 2020. 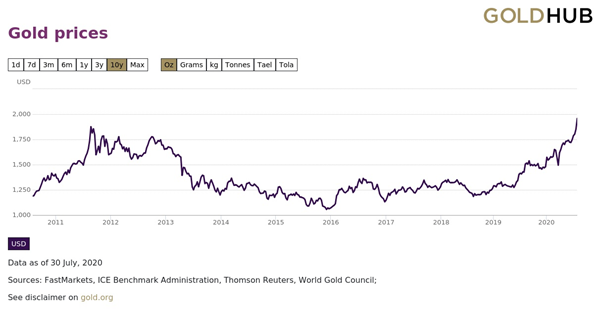 While the raised geopolitical tension in the midst of a pandemic and weak economic condition may lead to a major correction in the equity markets, the same driving factor could be beneficial for gold prices during a market crash. The strength in gold prices also increases the margin potential of a gold mining company.

Gold mining stocks fare pretty well during a gold bull run even during the equities crash, but their mileage may vary. So, intense research is required to identify the outperformers among the crowns.

In times of a market crash, the volatility levels in the market may be very high. We suggest picking up your glasses and check out the latest production results and the updated articles at Kalkine to quench your thirst.

While investing in a Gold miner, we suggest you look at some of the company’s numbers. Here are the parameters one should look for to correctly assess the gold stocks-

In the mining industry a cash cost, all in sustaining cost and All in costs are indicators of the expense levels for the gold operations. You would want these indicators to be as less as possible, which is taken as a good indication of effective operation.

While the miner would aspire to have a high realised gold price, sometime due to a streaming supply contract or a fixed price supply contract, a miner may be required to sell its produce at a price higher or lower than the market price.

Another key measure you need to see is the guidance and targets for the upcoming period giving an idea of the operations beforehand. So, the major focus should be on the increased cash flow and strong management.

Most of the gold stocks majors including Newcrest Mining Limited (ASX:NCM), Saracen Mineral Holdings (ASX:SAR) and the Evolution Mining Limited (ASX:EVN) consistently achieve the targets but do remember, the circumstances changes over time and a major may approach a flattening curve over time. In order to avoid flattening of the growth path, a miner needs to continuously invest on the exploration to ensure the progress in future.

Apart from gold majors a lot many gold stocks can be termed as the juniors. While the majors perform well, some of the juniors outperform all when the gold prices surge. For such companies look for those nearing production or actively pursuing project with high mineral resources. These metrics once again translates to strong growth in operations in future.

All in all, investing in gold stocks is a good strategy, specially when the market crashes. A good pick from the herd may result in strong gains even in the dismal times. Overall, the investment in gold stocks can be sweet but only when good investment decisions backed by research has been made.

West African Resources (ASX:WAF) in the March quarter completed the construction of the Sanbrado gold project with over US$20 million under the budget. The first gold was poured at the Sanbrado mine in Burkina Faso in the same month.

In April, West African acquired the 1.1 million-ounce Toega gold deposit from B2Gold for a consideration of US$45 million. The Toega deposit is located within 14 kilometres of Sanbrado project.

In the June production update, the company reported that it had processed over 937,108 tonnes of ores at a grade of 1.46 grams a tonne Gold till June 30. A total of 40,458 ounces was recovered at a metallurgical recovery of 92%. West African has planned to start exploration program at the Toega mega deposit.

West African has witnessed strong bull run on the back of the achievement of important operational milestones.

Alkane Resources Ltd (ASX:ALK) met the FY2020 production guidance of 33,507 ounces of gold at the flagship Tomingley operations with an All-in sustaining cost (AISC) of $1,379 an ounce of Gold. The miner experienced a production growth in the regions along the Tomingley corridor, which includes San Antonio and Roswell.

Further on Alkane received an underground exploration approval for the existing Wyoming One UG operations to the Roswell and San Antonio prospects. This marked the achievement of a major milestone towards the future development of underground mining operations independent of the open cut mining operations at the Tomingley. On the back of strong exploration and growth potential, Alkane targets a gold production of 45,000 to 50,000 at an AISC of $1,450-1,600 an ounce of Gold.

Alkane completed the demerger of Australian Strategic Materials (ASM) on 29 July 2020 which holds the Dubbo rare earth project in New South Wales. Alkane would focus on growing the existing portfolio and the exploration activities at the Boda deposit.