Lately, KTA has identified several critical anomalies from its recent Deep Ground Penetrating Radar (DGPR) survey across the Bell Valley Target area in the Belgravia Project. The anomalies are associated with and are in proximity with the earlier announced interpreted porphyry-related targets.

Other than this, the DGPR survey revealed a new anomaly situated southwest of Bella towards the Copper Hill deposit.

Further, the DGPR anomalies at Bella and Lara 1 and 2, notably coincide with drill-indicated anomalous gold and multi-element geochemistry. These anomalies also correspond with a pervasive magnetic low feature supposed to affect the location of mineralisation at the adjoining Copper Hill deposit. 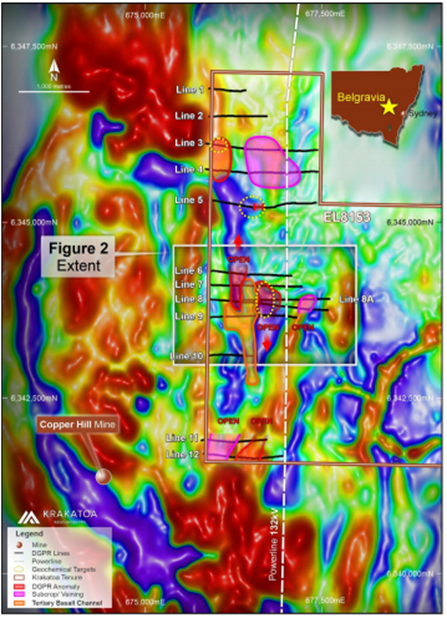 Interesting Read: Is KTA next to fire with Copper & Gold in the Lachlan Fold? Shallow Gold intercepts discovered

Details About the DGPR Survey

The DGPR survey was undertaken by Loza Radar Australia at the Belgravia Project, to draw the sub-surface geology and offer proof of favourable hosting environments for mineralisation. Some highlights of the DGPR survey conducted at the Bell Valley prospect are as follows:

In addition to this, a composite DGPR anomaly is also believed to lie in the southwest of the Bell Valley target area, which is the closest to Copper Hill.

KTA believes that the economic potential for Cu-Au mineralisation associated with a porphyry may lie at depth (>200m) in the Bell Valley area. Moreover, KTA is of the view that the DGPR validates high-grade copper-gold veins potentially extending upwards from a porphyry source establishing a secondary target at lesser depths.

Moving ahead, KTA looks forward to completing an induced polarisation (IP) survey at Bella and the Lara’s to discover sulphide mineralisation zones as found by DGPR. Importantly, the IP shall lay emphasis on diamond drilling in upcoming times at these prospects.