According to GSN the systematic soil geochemistry and mapping program is the first systematic gold-focused exploration program undertaken over the area and has been a great success for GSN in discovering the anomilisation signature of a large Intrusive Related Gold System within it. Moreover, it displays strong metal content.

GSN believes that it is a significant step toward potentially uncovering that Tier-1 deposit.

The results received from the geochemical survey work comprise of more than 652 soil samples and 11 rock chip samples lately completed over an area of 10 km2 north of Beaks Mountain.

Related: Great Southern Mining Surges 23% on the Back of Commencement of Drilling at Cox’s Find Project

The first systematic gold-focused exploration program undertaken in this area was concluded on a 100m x 100m spaced grid over an area identified from the interpretation of hyperspectral data in combination with reconnaissance geological mapping and aerial geophysics. 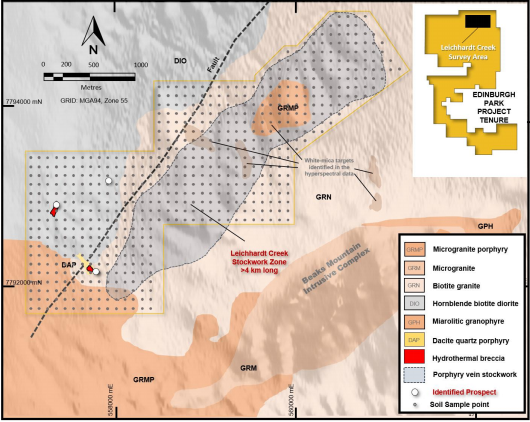 This soil survey was designed to test the

Various geochemical anomalism is shown in the picture below: 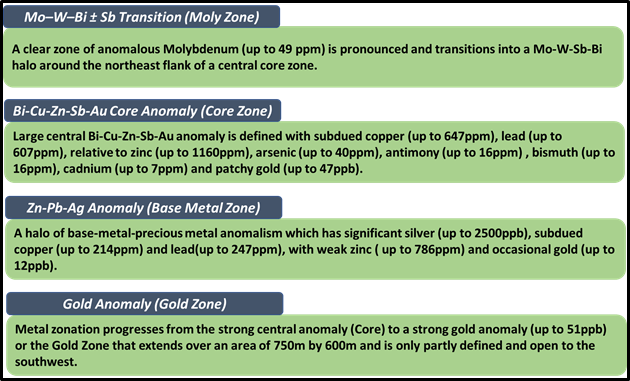 Did you read: Great Southern Mining Ready to Get the Boots on the Ground; Porphyry Targets Identified at Edinburgh Park

The interpretation of the geochemical patterns provides the following insights:

Moreover, the eastern margin of the Core anomaly corresponds with the delineation of two hyperspectral targets; confirming the use of the hyperspectral data in differentiating alteration patterns associated with anomalous geochemistry, and its use as an exploration tool to define IRGS targets.

Several hyperspectral targets of similar nature have been identified that are located beyond the scope of this geochemical survey and require additional investigation. Also, while the presence of a large Intrusive related gold system is confirmed by the scale and magnitude of the geophysical and geochemical anomalies, the presence of gold in that system is confirmed by the soil geochemistry.

GSN on the Way Forward

GSN looks forward to undertaking additional mapping and soil geochemistry survey to the south in order to encompass the full extent of the mineralised system. They will also look at utilising geophysical methods to start defining this system in three dimensions to explore and interpret the system at depth to advance the prospect to an exploratory drilling stage.

In addition to this, they are currently undertaking mapping and soil geochemical surveys over several of the other prospects within the massive landholding of Edinburg park project area.