Tempest Minerals Limited (ASX:TEM) has shared an update on the proposed drill program at the Euro Project. The company has received approvals for drilling at the Calais target area on the project. The planning and preparations for the drilling program are also in their final stages.

Tempest considers the Euro project to be located in an underexplored geological terrain surrounded by numerous development projects and operational mining operations such as the Karara (Iron), Shine (Iron), Mt Mulgine (Gold/Tungsten) and Rothsay (Gold/Copper).

To follow up on the previous drilling programs conducted during the 1990s and early 2000s, Tempest plans to drill up to 2,000m at Calais. The previous drill programs had intercepted significant intersections such as 15m @ 2.3g/t gold from 15m and 2m @ 11gpt from the surface. Despite the promising results, the prospect couldn’t be adequately tested due to weak gold price environment in the past.

Tempest has developed a thorough understanding of the structural and stratigraphic controls of the mineralisation, thanks to the compilation of historic data and further field observations. Further, the gold mineralisation remains open in all directions and has strong analogues to nearby operations. 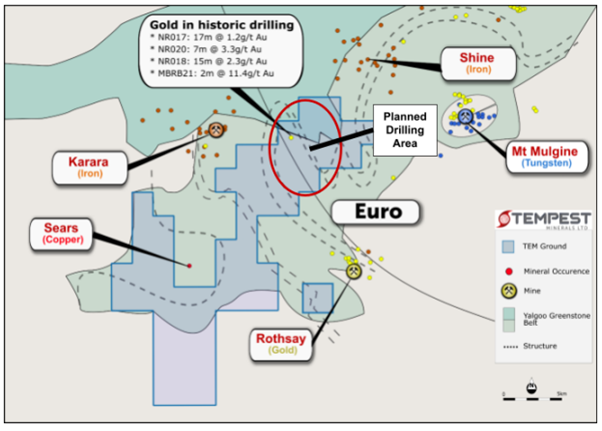 The significant anomalous zones include the high-grade tenor mineralisation recorded at the Calais target area during the previous reconnaissance shallow drilling by Aztec, Normandy Gindalbie and others. Although the initial holes had intersected significant levels of shallow gold mineralisation, they couldn’t be thoroughly tested primarily due to the persisting weak gold price environment.

The next steps at the Euro gold project include –

Tempest has announced the completion of a further AU$500,000 top-up placement. On 26 August, Tempest had shared its capital raising plans to advance on the Western Australian projects, including-

Tempest received incredible support for its capital raising programs, with the offer being heavily oversubscribed.