Australian exploration company, Tempest Minerals Ltd (ASX:TEM), continues to make a headway on the diversified suite of mineral projects in Western Australia. Recently, the company released the activities report for the quarter ending 30 June 2021, outlining the major milestones achieved and the major events at the portfolio projects prospective for precious, base and energy metals.

Let us have a look at the major milestones achieved at TEM’s portfolio projects.

Yalgoo Projects in the proximity of world-scale mining ope

Tempest progresses on 4 promising and highly prospective projects in the Yalgoo region of Western Australia, expanding across more than 900 km2, including 604 km2 and 311 km2 of pending tenure. The Yalgoo Greenstone Belt is home to a suite of world-class mines and still includes vast unexplored regions with highly prospective geology.

Messenger Project: The Messenger project includes 3 granted and 2 tenement applications, adjacent to the world-renowned EMR’s Golden Grove base and precious metal mine. The outcrops from the Golden Grove Unit are understood to be present at the Messenger Project and are considered highly prospective for VMS and shear/lode-hosted gold mineralisation. 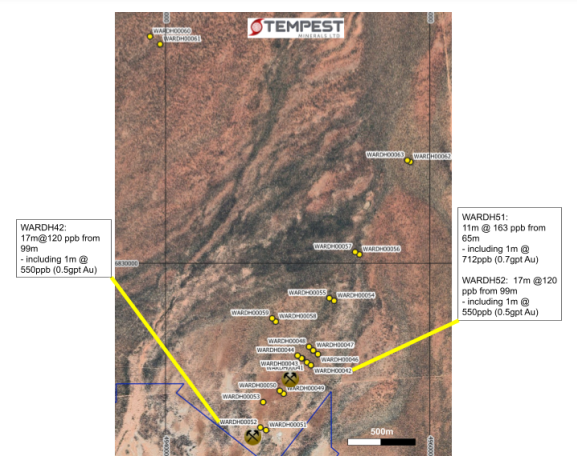 In March 2021, the company extended the project area and now also includes section of the ‘Messengers Patch’, which is credited to host multiple high-grade gold mines with grades up to 10 ounces of gold a tonne. 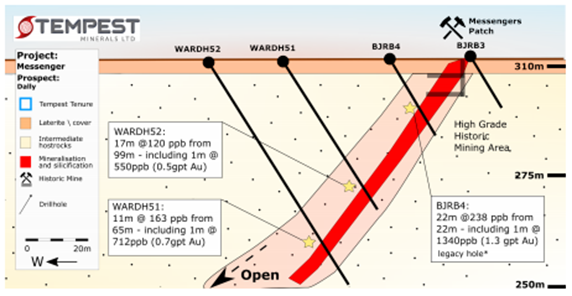 In late March 2021, a 2,100m reconnaissance drill campaign was completed at the Messenger Project.

On 26 May 2021, the assay results of the drilling program were released after some delays related to the economic effects of the COVID-19 pandemic. The assay results recorded broad zones of alterations hosting gold mineralisation with grades up to 0.7 g/t Au. Additionally, most of the holes drilled intersected thick quartz veins, magnetite and alteration of the intermediate volcanics and intrusive host units. 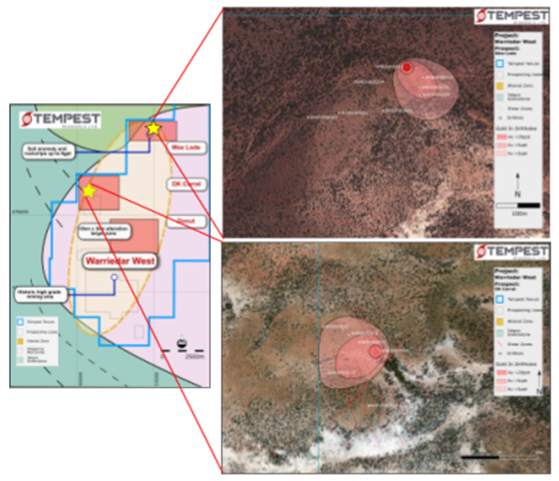 The latest drilling program, held in Q4 2020, confirmed the presence of extensive near-surface gold mineralisation along with areas of quartz vein swarms with gold grades up to 5 g/t. The Warriedar West gold discovery is proximal to the existing underutilised gold processing plants, with already established hauling routes underpinning the early-stage commercial development potential of the gold project.

Furthermore, major new extensions have been delineated over the Wee Lode area. Tempest has undertaken a review of the activities conducted to date along with aerial photography of key outcrops to identify the priority targets for the next drilling programs.

Meleya project- The Meleya project is situated on the Warriedar Fold Belt and is considered prospective for Volcanogenic Massive Sulphide (VMS) and IRG deposits and Lode-Hosted /Orogenic vein-style gold mineralisation.

In early 2020, Tempest strengthened its ground footing at the project. During the June quarter, the company advanced on approvals and planning for further fieldwork to test the recently identified targets in the subsequent drilling program anticipated in the December quarter 2021.

Euro Project: The Euro Project includes 4 wholly owned tenements spreading over 176 km2 in the renowned Southern Yalgoo Greenstone Belt in the neighbourhood of Rothsay, Mt Mulgine, and the Karara Mines.

The gold project has recorded broad gold intercepts in the previous drilling campaigns, which could not be followed up due to dismal gold price environment in the past. Tempest follows a data-driven approach and has remodelled extensive magnetic datasets to undertake concentrated exploration activities at the Yalgoo Projects. 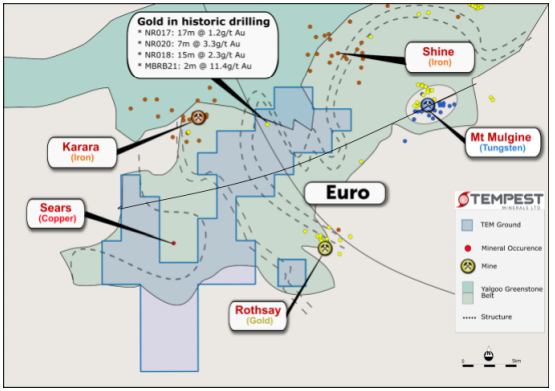 During the quarter, Tempest concentrated on identifying numerous high-priority exploration targets prospective for gold, base metals, and iron ore at the project. The Kiev target within the project area exhibits strong geophysical signature to the proximal Silverlake Resources’ (ASX:SLR) Rothsay Mine.

During the June quarter, Tempest focused on aggregating and combining legacy datasets and reviewing them with new geological data, which led to the delineation of numerous targets at the Calais and Kiev targets. Further, a reconnaissance fieldwork undertook in June, identified significant potential for iron ore in the outcroppings on the northern section of the project. 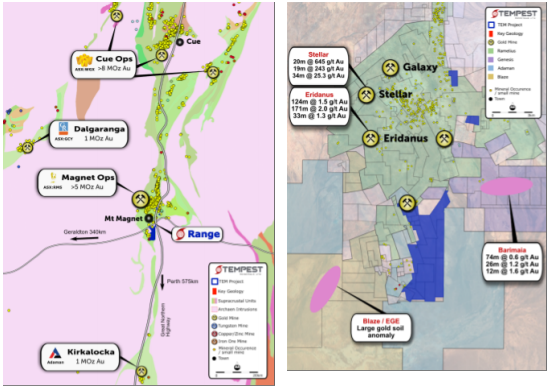 Range- The project is located in the central Mount Magnet mineral field, along the strike of the >6Moz Mount Magnet Operations. During the quarter, Tempest concluded assessed the potential drill targets at the project.

Tempest owns 3 tenements stretching over 105.4 km2 at the Yilgarn Lithium project. During the quarter, the company progressed on regulatory compliance, technical review and data analysis.

Tempest plans to continue to evaluate and pursue new growth opportunities across jurisdictions and commodities to create value for its shareholders. The company owns over 74.512 million shares of Premier African Minerals Ltd (AIM: PREM) worth AUD$275,000.

The next steps planned for the September quarter Source: TEM company announcement 2 August 2021