Australian exploration company Tempest Minerals Ltd (ASX: TEM) gears up to fuel the next leg of exploration activities at its premium Yalgoo and Mount Magnet project areas in Western Australia.

On 26 August, the exploration company announced that it had received overwhelming support from sophisticated and professional investors for the equity raising of up to AU$1.6 million (before costs) to underpin the ongoing exploration programs at the highly prospective projects.

Tempest will use the capital raised from the equity raisings to fund the ongoing exploration at the Western Australian projects, especially around the Yalgoo and Mount Magnet regions and for work purposes.

Placement - TEM will issue 23,000,000 shares at an issue price of AU$0.017 a share, along with 7,666,667 Options to sophisticated and professional investors to raise a sum of $391,000. The shares will be issued under the Tempest’s existing capacity to float new securities in accordance with the ASX Listing Rule 7.1 (12 million shares) and Listing Rule 7.1A (11 million shares).

The issuance of the Placement Options to the participants is subject to shareholder’s approval and will take place upon the completion of the Entitlement issue. 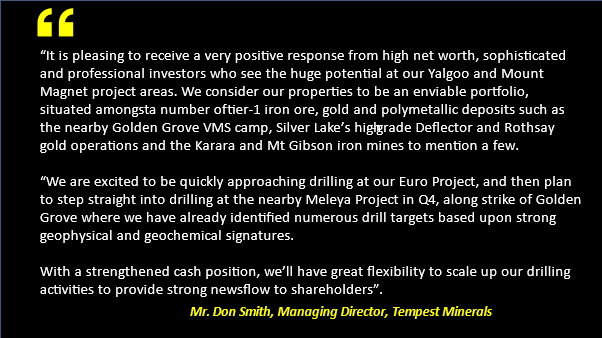 Entitlement Issue: TEM proposes to raise another AU$1.252 million (before) from the existing eligible shareholders offering 1 share on every 4 shares held at an issue price of AU$0.017 a share. Further, under the proposed issue an attaching Option will also be issued for every 3 shares issued.

In case of any shortfall, the eligible shareholders will be invited to apply for the remaining shares of the Entitlement Issue. The timetable for the issue will be released in due course.

Tempest will pay a 6% selling fees on the Placement and issue 6 million Options, contingent on the shareholders’ approval and completion of the Entitlement Issue.

Mineral Projects in the proximity of world-scale mining operations

Tempest owns a highly prospective suite of mineral projects in the proximity of the world-class and renowned mining operations and projects, including EMR’s Golden Grove base and precious metal mine, Silver Lake’s Rothsay gold operations, Mt Mulgine, and the Karara mines.

Currently, Tempest has been ramping up exploration efforts on its mineral projects in the Yalgoo and Mount Magnet projects. Tempest owns a suite of 4 promising projects in the Yalgoo region of Western Australia, which stretches over more than 900 km2. The Mount Magnet project is located in a mining-friendly mining jurisdiction that holds a gold legacy of producing at least 6 million ounces.

Tempest has been aggressively exploring the Euro project and has planned to undertake a drilling program. The company has also planned a drilling program at the nearby Meleya project in the last quarter of 2021 to test the already delineated targets along the strike of Golden Grove.

Recently, Tempest delineated highly prospective iron-rich targets at the Euro project. As many as 45 additional iron-rich outcroppings have also been delineated at Euro, stretching the potential strike length to more than 20kms.