Vanadium, a silvery-grey specialty metal is found in around 60 minerals and has long been hailed for its structural strength, corrosion resistance and stability characteristics. While Vanadium is largely used by the steel industry currently for producing vanadium nitrogen alloys, the metal is anticipated to play a very crucial role in the global transition to renewable energy.

In recent times, the demand for vanadium has been booming for utility-scale battery storage, steel alloys, nuclear reactors, military applications and Aeronautical-related specialty alloys. In fact, as per Technavio, the global demand for vanadium is slated to increase by 28,310t from a base of 73,000t during 2020-2024. Adding on to the opportunity are the latest restrictions on the Russian supply of vanadium which account for roughly 25% of the global supply. The lower available supply for global trade supports prices of the metal and also heavily disrupts the current demand-supply balance. 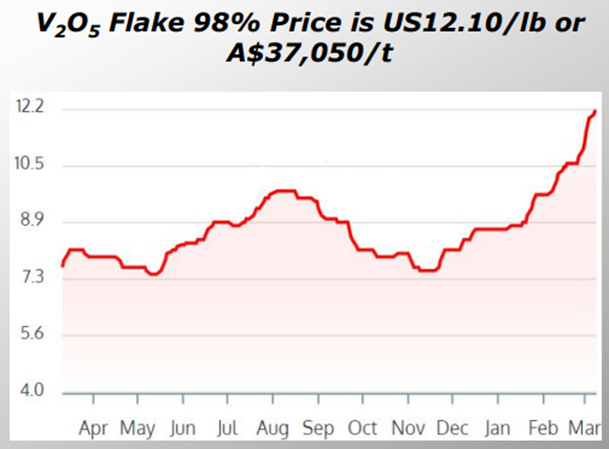 Since the beginning of 2022, prices of vanadium have risen by over 60%. China continues to be the global demand centre of the metal with robust demand from the infrastructure sector. With the China-Russian trade alliance, the Russian production could feed Chinese steel plants’ hunger while the world remains in vanadium deficit in the years to come.

Excited by a strong vanadium demand and the price rally, Surefire Resources NL (ASX:SRN) believes that the company is well positioned to develop and tap the commercial opportunity at the Victory Bore-Unaly Hill vanadium project in Western Australia.

The company believes that the current resource could support a mining operation with a life of mine of more than 40 years. Initial production levels are estimated to stand at 3.2Mtpa ore to produce 7,600t of vanadium pentoxide. The project is estimated to be economically viable at the current vanadium prices as the company proceeds towards a Scoping Study to update and confirm economic viability. 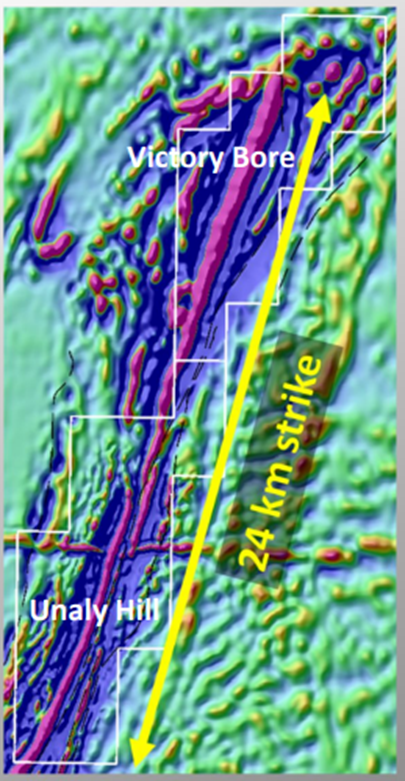 The defined mineral resource is hosted within a layered gabbro Mineralisation demonstrating excellent consistency. Inferred Resource at the deposit is open down-dip and along the strike. So far, just 8km out of the 24km strike has been drill tested.

Preliminary studies suggest that the mineral project is economically viable to produce a high-grade vanadium pentoxide product. The areas with potential to deliver an efficient and economic processing outcome have already been delineated in the project.

The metallurgical test works so far suggest that an easy first-stage concentration of 1.43% V2O5 could be achieved with a 93.7% metallurgical recovery of vanadium. The final product of the vanadium project will be a high-grade, premium vanadium flake V2O5.

The second phase of the metallurgical testing is being proposed to further refine process flow parameters. On the drill testing, the company is confident to undertake an additional drilling program to establish an Indicated Resource. The completion of these proposed activities will pave the way for the prefeasibility study of the project.

While the global economy fastens its seatbelts to ride the clean energy wave, the energy storage dilemma still continues to be an unsolvable paradox. At a time, batteries have been dubbed the ‘holy grail’ of clean energy and are the critical piece of the energy puzzle.

With global economies announcing plans to achieve carbon neutrality, Australia has set a target to achieve the feat by 2050. The country has pledged to reduce its carbon emissions to 35% below 2005 levels by the year 2030.

Back in 2018, vanadium was added to the US & Australian strategic metals lists. The metal’s application in energy storage has made countries across the globe scourge for reliable and stable supply of vanadium for a sustainable future.

Vanadium is uniquely endowed with the ability to exist in four different oxidation states. This unique attribute of vanadium is used in storing electrical energy in the form of chemical energy. The usage of only one material minimises chances of cross-contamination. Further, a Vanadium Redox Flow Battery (VFRB) can convert and store electrical energy in two distinct tanks with electrolytes, allowing the safe storage of energy for longer periods without any loss.

While energy storage is a burgeoning opportunity for vanadium, the metal is also gaining increasing demand from the defence and space sectors for high-performance steel alloys.