Marching forward by the virtue of its insightful undertakings, King River Resources Limited (ASX: KRR) certainly seems ready to make impressive case for its strategic exploration endeavours. The Company with the announcement of its 2,000m RC drill programme at the Tennant Creek Project has taken its already robust approach up a notch.

The programme commencing on 10 August 2020 will test for high-grade gold mineralisation at the project. The drilling will follow-up on exceptionally promising geophysical results returned from the 2019 geophysical surveys. The Company will also initiate reconnaissance exploration along with both ground and airborne geophysical surveys in the weeks to follow for progressing other priority targets for drilling. 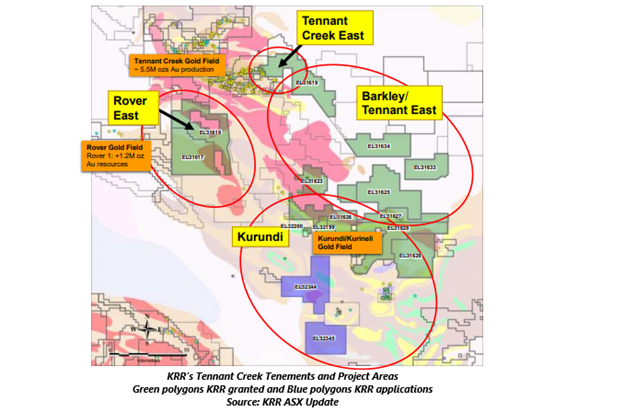 Notably, the Company earlier during mid-July had revealed the commencement of its 2020 gold exploration programme at Mt Remarkable Project and Treasure Creek Project from August after the delays caused by the COVID 19 pandemic restrictions.

The proposed activities are planned to take place against the backdrop when yellow metal prices are smashing new records, booming prospects for the yellow metal explorer. The acceleration of exploration and drilling programmes at the gold-centric projects would further stimulate the booming opportunities in the ongoing volatile scenario.

Three main coincident gravity and magnetic trends will be targeted during drilling at the Lone Star area. The magnetic and gravity anomalism strength of the targets is comparable to other known Iron Oxide Copper Gold (IOCG) deposits present in the area. It is to be noted that at Emmerson Resources Mauretania deposit, which is only 700m from the western boundary of KRR’s tenement, a diamond drill hole returned 20m @ 38.5g/t Au in 2019.

The Treasure Creek holdings cover areas along strike of both the Tennant Creek and Rover Gold Fields areas of similar stratigraphic and structural settings.

Past exploration in the areas covered by the Treasure Creek holdings has been brief, sporadic, and disjointed, with shallow Cambrian cover present in many areas preventing discovery by historical players. King River Resources opines that there is potential for significant discoveries by the application of systematic exploration along with new/advanced geophysical techniques.

Exploration is dedicated towards IOCG style mineralisation (IOCG). It is characterised by gold and copper mineralisation associated with ironstone bodies, likely of the Tennant Creek Style.

The ironstone bodies having varying degrees of hematite and magnetite often forms discrete geophysical targets. It could be characterised by the bonanza gold intersections observed elsewhere at Tennant Creek.

Besides the current drilling programme, the Company’s 2020 exploration activities will also incorporate reconnaissance of the Tennant Creek East area. It lies immediately adjacent to the Metallic Hill, Lady May, Blue Moon and Gigantic historic IOCG gold mines, all of which are between 200m and 800m of the tenement boundary.

In the area, KRR will test the best of the known magnetic anomalies and reconnaissance discoveries with ground magnetics or gravity surveys in 2020.

KRR has secured a grant in the Tennant East/Barkley area for funding under Round 13 of the Geophysics and Drilling collaborations program, which is administered by the Northern Territory Geological Survey (NTGS).

The co-funded programme covers half of the survey costs for testing and defining significant magnetic anomalies and depth of cover in a previously unexplored area. It includes a detailed airborne magnetics survey over EL31633 and a ground geophysical survey over EL31634.

King River has also planned initial reconnaissance exploration at its Kurundi Project, where the Company has been granted two exploration licences over part of the Kurundi Anticline. It covers the Kurundi historic gold mine and the Whistle Duck prospect, both of which have reported significant gold and copper results.

Stock Performance: Post the significant update, KRR stock closed the day’s trade at AU$ 0.040, moving upward by 17.647% from its previous close. The stock has delivered a six-month return of around 79%.