The choppy ride for economies has sent conventional investment priorities into a nosedive, as surging issues potentially eclipse the mindsets. Meanwhile, the wavering scenario touching Australian landscape has fostered fertile ground for the yellow metal, with investors maintaining an upbeat stance concerning the bright gold prospects.

In the current attractive bullion market, which is staging series of gold rallies and witnessing gold futures edging higher, the potential around gold sector players has significantly boomed. Resonating similar situation, the gold projects of King River Resources Limited (ASX: KRR) appear to relish being right in the thick of ameliorating scenario around the precious commodity.

Propelled by the boosting prospects, King River Resources is seemingly moving steadfastly for further reinforcing the robustness of its gold-centric projects. The Company recently announced its 2020 gold exploration program, which is set to commence this month post encountering delays due to the COVID-19 restrictions. The exploration programme would target KRR’s high-grade gold projects, which include Mt Remarkable Project in Western Australia and Treasure Creek Project in the Northern Territory.

With this backdrop, let us skim through the critical exploration activities that the gold projects of KRR are set to witness in the near-term.

At Mt Remarkable Project, the exploration programme would be targeted towards extending the current high-grade gold mineralisation, as well as identifying new high-grade shoots on known mineralised veins and new mineralised veins/structures. Drilling is planned at the project in September/October 2020.

Other drill targets encompass the easternmost Trudi vein’s extents, the Jennifer North prospect along with the new target under interpreted cover units where the intersection of the Catherine Vein and the Grahame Vein happens.

Besides, for the extensive regional tenement holding of the project, the Company intends to carry out reconnaissance exploration, planned along the prospective Whitewater Volcanic rocks stretching along a NE-SW strike of 200 kilometres, situated south of the Speewah Dome. The scarceness of previous exploration along the proposed prospective trends sitting between high-grade gold projects further opens the opportunity for additional high-grade gold discoveries within the Whitewater unit.

Post the drilling, reconnaissance exploration, and ground and airborne geophysical surveys would be carried out for progressing other priority targets for drilling. IOCG mineralisation (iron oxide copper-gold style mineralisation) would be targeted during the exploration programme. Notably, IOCG is characterised by gold and copper mineralisation attributed to ironstone bodies, probably of the Tennant Creek Style.

Drilling will initially target the Lonestar Trend and Commitment Prospects in the Tennant Creek East Project area. Exploration planned for 2020 will also include reconnaissance of the Tennant Creek East area, which is immediately adjacent to the Metallic Hill, Blue Moon, Lady May, and Gigantic historic IOCG gold mines. The Company this year would test the best of the known magnetic anomalies and reconnaissance discoveries of the area with ground magnetic or gravity surveys.

In the Tennant East/Barkley area, KRR plans to pursue the co-funded programme covering 50% of survey costs (offered by the Northern Territory government) for testing and defining significant magnetic anomalies and depth of cover in the area, which remains previously unexplored. Existing targets will be defined along with the identification of new targets by the survey for enabling prioritisation for subsequent drill programmes.

The Kurundi Project holds four exploration licences over part of the Kurundi Anticline, and it comprises the Kurundi historic gold mine. The Company would start reconnaissance exploration along with the other KRR 2020 programmes planned in the Tennant Creek region. 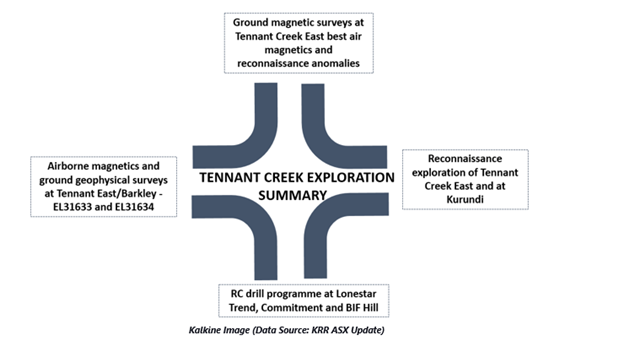