Stepping up exploration efforts to a new horizon, King River Resources Limited (ASX: KRR) is all set to boost its ongoing strategic activities targeting its gold-centric projects. In a significant update, the Australian explorer reported that next month, it would start gold exploration and drilling programmes for 2020, with a relaxation of the COVID-19 restrictions.

Meanwhile, the Company has continued to work remotely with its consultants, laboratories and advisors, targeting the completion of Prefeasibility Study at flagship Speewah Specialty Metals (SSM) Project. The consistent efforts yielded the production of >4N (99.99% Al2O3) High Purity Alumina (HPA) along with significant progress in the PFS-related testworks.

ALSO READ: King River Resources’ Forward Plans for Speewah Project on the Back of Recent Developments

The upcoming exploration programme would target both of KRR’s high-grade gold projects, Mount Remarkable Project in Western Australia and Tennant Creek Project in the Northern Territory. 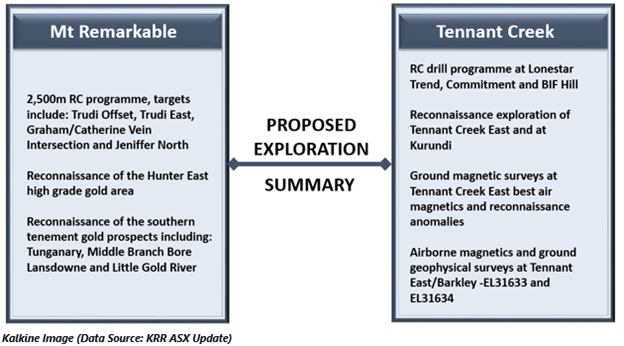 KRR, as part of its 2020 exploration, has planned a 2,500-metre Reverse Circulation (RC) drill programme at the main Mount Remarkable project, which reported high-grade gold mineralisation including best result of 4 metres @ 113.29 grams per tonne Au including 1 metre @ 346 grams per tonne Au. The Company believes in the discovery potential for further high-grade deposits along with the licences over 2,300 square kilometres covering the Whitewater Volcanics that have sparsely explored trend.

Notably, the Company at the Trudi offset target discovered a new mineralised zone 150 metres east of the main Trudi deposit, while initial drilling at the Jeniffer North prospect returned grades up to 0.64g/t Au in a newly discovered vein set. 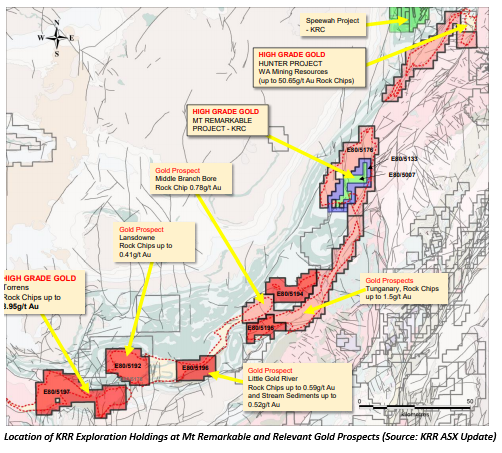 Commencement of exploration early next month is planned at KRR’s Treasure Creek Project situated in the Tennant Creek Region. The plan includes a 2,000-metre RC drill programme building on positive geophysical results from ground magnetics and gravity surveys of 2019. Reconnaissance exploration, along with ground and airborne geophysical surveys, would be carried out post the drilling for progressing other priority targets for drilling.

Iron oxide copper gold (IOCG) style mineralisation characterised by gold and copper mineralisation associated with ironstone bodies would be targeted by the exploration. The Company believes in the prospective for significant gold discoveries with the application of systematic exploration and advanced or new geophysical techniques.

In the Tennant Creek East area, the Lonestar Trend and Commitment Prospects would be initially targeted under the drilling programme. The strength of the targets’ magnetic and gravity anomalism defined by 2019 geophysical surveys is comparable to other known IOCG deposits in the area.

It is to be noted that the Lonestar target is ~700 metres along strike from the Emmerson Resources Mauretania deposit where 20 metres @ 38.5 grams per tonne Au was returned in 2019.

Exploration planned for 2020 will also incorporate reconnaissance of the Tennant Creek East area. In this area, the Company this year intends to test the best of the known magnetic anomalies and reconnaissance discoveries with ground magnetics or gravity surveys.

KRR, in the Tennant East/Barkley area, has been awarded a funding grant under Round 13 of the Geophysics and Drilling collaborations program, which was administered by the Northern Territory Geological Survey (NTGS). The co-funded programme covering 50% of survey costs for testing and defining significant magnetic anomalies and depth of cover in a previously unexplored area incorporates:

The new survey covering some prognosed extensions to the IOCG belt in the Eastern Tennant Creek area had been gaining traction amongst major exploration firms such as Newcrest Mining Limited (ASX: NCM) and Rio Tinto (ASX: RIO).

The Kurundi Project has four exploration licences over part of the Kurundi Anticline, covering the Kurundi historic gold mine and the Whistle Duck prospects. KRR plans to commence reconnaissance exploration at these prospects concurrently with its other 2020 programmes intended for the Tennant Creek region.