Inferred Mineral Resources for Parks Reef with contained metals of 1,140,000 ounces of combined platinum, palladium and gold plus base metal credits with 37,300 tonnes copper has been defined through drilling to date by Podium Minerals.

The existing Mineral Resource stretch over 6.9km of the identified 15km strike length of Parks Reef and within 100m of the surface. Moreover, the mineralisation remains open along strike and at depth.

Moreover, an Exploration Target has been estimated for Parks Reef of 80Mt to 120Mt at 1.2g/t to 1.5g/t 3E PGM containing between 3.1 and 5.8 million ounces of combined platinum, palladium and gold on the basis of the continuous and thick mineralisation demonstrated in Podium’s resource drilling.

However, POD highlights that the potential quantity and grade of the Exploration Target is conceptual in nature as there has been insufficient exploration to estimate further Mineral Resources. Moreover, POD remains uncertain that additional drilling would result in determining Mineral Resources.

Did you read: Podium Minerals to hit the ground running at its Parks Reef PGM Project

POD progressively moves towards the advancement of its growth strategy for Parks Reef with clear work programmes to outline a credible pathway to production, including:

The west, central and eastern sectors of Parks Reef are the three resource blocks that constitute the current Mineral Resources definition. Moreover, POD has been empowered to efficiently build a resource base while increasing confidence in the continuity of mineralisation along strike through this approach.

Of late, POD has speedily mobilised a resource drilling campaign with approximately 1,600m of reverse circulation (RC) drilling aimed to connect the earlier defined resource blocks in the western and central sectors of Parks Reef. 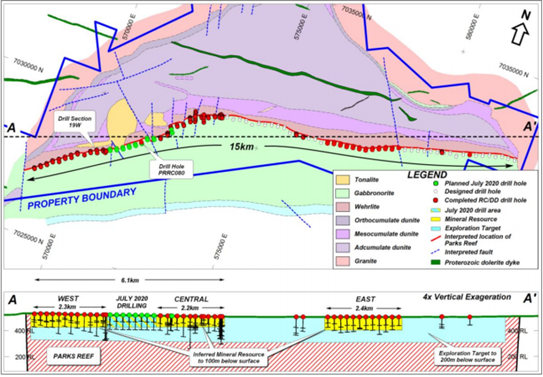 POD anticipates successful results from the drilling to grow the scope of the total resources to a combined length of 8.5km, comprising a continuous resource block spanning approximately 6.1 km over the western half of Parks Reef.

POD expects to complete results from the drilling during the current quarter. Furthermore, POD also plans to comprise assays to test for continuity of high-value rhodium that was discovered in earlier drill programmes. Subsequently, POD shall then initiate modelling to assist in upgrading the Mineral Resources at Parks Reef.

Significantly, POD plans to undertake geological mapping and rock-chip sampling to test for a possible western extension of Parks Reef as part of the existing fieldwork. 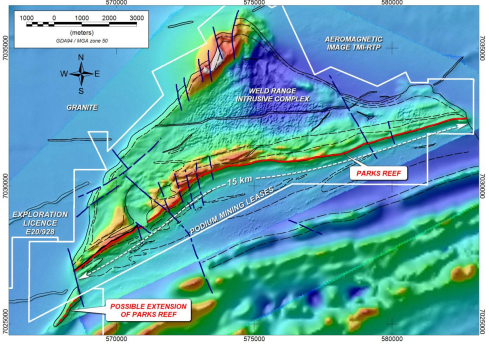 Prospectivity for approximately 1.2km long extension of the western flank of the Parks Reef has been indicated through magnetic imagery. The area adjoining the western end of POD’s mining leases area lying within POD’s exploration license (E20/928) is the area of interest.

Further, in order to test for anomalous PGM and base metals, POD has planned rock-chip sampling of the outcrop. Significantly, if this turns out to be positive, POD shall undertake follow-up drilling.

POD has continued to increase its focus towards advancing growth strategy at Parks Reef PGM Project. As a result of this, POD’s Board has decided not to apply for renewal of its non-core exploration licenses at Highlander (Northern Territory EL 26094) and Tuckabianna (E20/845).

Moreover, POD has surrendered the tenements at Mindoolah (E20/876 and E20/877). Although prospects for gold and base metal mineralisation were indicated through early-stage exploration within each of these tenements, yet exploration activities failed to identify discrete targets.

An important conclusion through the strategic review done by POD’s Board is that better opportunity to maximise shareholder value is presented through prioritising resources and funds to build on the successes to date at Parks Reef.

In addition to the resource development work, POD is on track to a metallurgical testwork programme with the Extractive Metallurgy MPI group at Murdoch University with joint funding provided under the Australian Government's Innovation Connections programme.

This testwork is in persuasion with previously finalized testwork programmes carried out at the Western Australian School of Mines. Moreover, testwork is principally focused on selecting and optimising a leaching process to treat the oxidised mineralisation in Parks Reef.

The testwork is anticipated to last through the upcoming September and December 2020 quarters. Also, it is believed to be a critical path activity to be accomplished along with the resource drilling to supplement a Scoping Study to define an ideal development plan for the project.

Developments at the Financial Front

POD also undertook a capital raising for a total of approximately $1,540,000 to advance growth strategy at the Parks Reef Project with drilling underway within three weeks of accomplishment of the capital raising. Moreover, POD also received around $711,000 in amounts owed by EV Metals and $391,000 from the sale of 3 million shares held by Podium in EV Metals.

POD’s cash on hand stood at $236,000 at 30 June 2020 with an additional approximately $2,142,000 in funds received during July from the completed SPP and the repayment of debt and the first tranche sale of Podium’s shares in EV Metals.

This signifies that the Company is well funded to maintain its operations and meet its business objectives. Moreover, POD is optimistic of receiving additional funds through the sale of its remaining shareholding in EV Metals.