Details of the Capital Raising

The Company shall raise $1m by way of a share Placement and SPP, distributed as:

Furthermore, the directors of the Company have also put forward their intention to take part in the SPP to a minimum amount of $90,000, while the Company has received funds from qualified sophisticated investors for $500,000 through the issue of new fully paid ordinary shares in POD.

The additional SPP has been announced to offer an opportunity to existing shareholders of POD to participate in the capital raising at the same price as the Placement. The shareholders can apply for a maximum of $30,000 of new shares at a price of 1.6 cents per share without any brokerage or other transaction costs.

The schedule regarding the various stages of the Share Purchase Plan have been outlined by the POD as follows:

The issue price of the SPP and the Placement:

Podium has been considerate of current market conditions in determining the issue price of its securities under the Placement and the SPP while enabling shareholders to share the growth prospects of the Company.

POD looks forward to employing the proceeds from the capital raising towards the advancement of its 100% owned extensive Parks Reef PGM Project and cement its growth strategy. The capital raising announced by the Company is part of the funding strategy for the work programmes and shall offer immediate funds while allowing the Company to initiate the next stage of drilling as soon as possible. 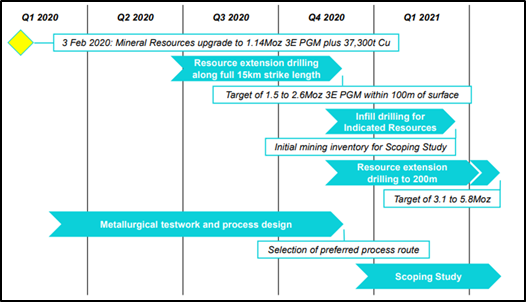 Further, the Company can offer additional funding for the work programmes with the intention of monetising the value of its investment in unlisted company EV Metals Group plc, where POD presently holds around 16.4 million shares (17% interest), which would lessen dilution for shareholders.

Presently, EV Metals owes around $707,000 for its share of joint tenement costs to POD and has intimated POD about the likeliness of completing substantial fundraising which shall enable EV to repay funds owed to POD in the short term.

Additionally, EV Metals has intimated that as part of its fund raising it has identified investors who are interested in procuring POD’s shares in EV Metals. Podium has inked an agreement with EV Metals allowing EV Metals to place all of Podium’s shares in EV Metals for a total value of not less than $2.2 million or pro-rata part thereof.

The various value propositions highlighted by Podium Minerals Limited are as follows:

The Company is optimistic about continued drilling through the capital raising, with the opportunity to sell the investment in EVM to finance additional work programmes are continuing.