Australian clinical-stage regenerative medicine company, Regeneus Ltd (ASX: RGS) recently announced positive results from its preclinical trial of Progenza in the treatment of allodynia, a condition in which pain occurs from non-painful stimulation of the skin, such as light touch. The company utilizes stem cell technologies to establish a portfolio of novel cell-based therapies to cater to critical unmet medical needs.

The trial, completed with the University of Adelaide, showed a single injection of Progenza given on day 14 post-nerve injury was effective in gradually reversing allodynia to a level that is not significantly different than prior to the injury. This study supports the companyâs growth strategy targeting the global neuropathic pain market, which at present has limited successful treatment options and many with substantial unwanted side effects such as the addictive opioid pharmaceuticals.

In late January 2019, the Board of Regeneus Ltd had appointed highly experienced Mr. Leo Lee as its new CEO. Following his appointment, Mr. Lee has driven a review of the companyâs operations, assets and strategy to make sure that the company is well-positioned to maximise the value from its existing assets.

Besides this, the company is exploring additional therapies in pain utilizing the companyâs Progenza and Sygenus technologies, with funding and activities supported by scientific partnership model. The Pre-clinical animal studies for both Progenza and Sygenus have demonstrated positive outcomes in the treatment of pain, disease modification. 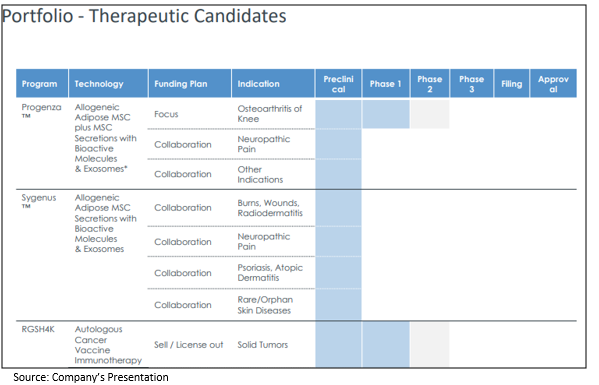 In order to fund the Progenza Phase 2 development, the company recently announced a 1 for 6 pro rata non-renounceable entitlement offer of fully paid ordinary shares in Regeneus to raise around $3.2 million. This announcement follows the successful completion of $2.34 million placement which received strong support from institutional, sophisticated and professional investors from Australia, Japan, Singapore, China and the US.

Mr. Lee, on placement completion, expressed gratitude to the companyâs new and existing shareholders for their continued support and the confidence they had placed in the company in steering the company towards long term value creation.

The Timetable for the Entitlement Offer is as follows- 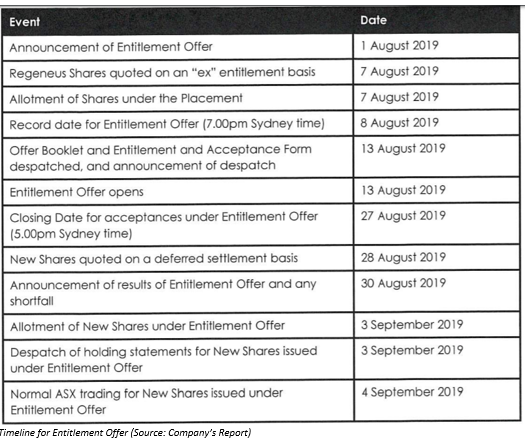 It is to be noted that the Entitlement Offer is partially underwritten to $1.8 million by the Companyâs Directors namely, Messrs Leo Lee, Glen Richards, Barry Sechos and John Martin. This demonstrates the Boardâs continued confidence in Regeneusâ strategic focus on delivering regenerative therapies for the US$69 billion global pain market and its immediate plans to commercialise Progenza in Japan.

The total funds raised via placement and Entitlement Offer will amount to $5.5 million, which will provide the Company with sufficient funds to secure a commercial licensing deal for Progenza for osteoarthritis in Japan.

The company is currently on the verge of securing a commercial licensing deal. The funds, in combination with milestone payments to be received from the Companyâs Japanese partner, will be used to fully fund the commercialisation of Progenza for osteoarthritis in Japan, by 2023.

The Board is currently finalising various initiatives for implementation in early FY2020, which will align the Companyâs operations with its revised strategic direction and ensure the efficient and effective deployment of capital.

At market close on 2nd August 2019, Regeneus shares were trading at a price of $0.100, up 5.263% with a market capitalization of circa $19.84 million. Investors may look at the indicative development timeline of the company, as mentioned below: 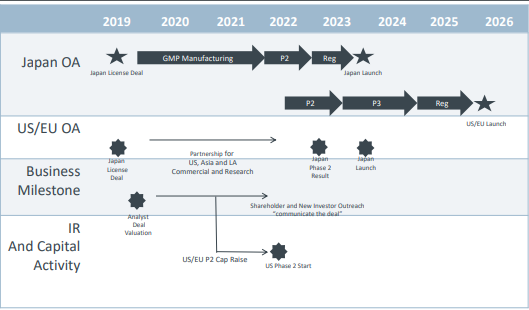 CLICK HERE FOR YOUR FREE REPORT!
Tags:
Healthcare ASX: RGS
All pictures are copyright to their respective owner(s).Kalkinemedia.com does not claim ownership of any of the pictures displayed on this website unless stated otherwise. Some of the images used on this website are taken from the web and are believed to be in public domain. We have used reasonable efforts to accredit the source (public domain/CC0 status) to where it was found and indicated it below the image.