On 23 May 2019, PET announced that the first four days of trial applied on an exceptionally heavily polluted lake in South West China has resulted in reducing the phosphorus by 75%. The outcomes also established that Phoslock was simple to apply, and the trial application did not have any influence on the fish, plant life or human beings. 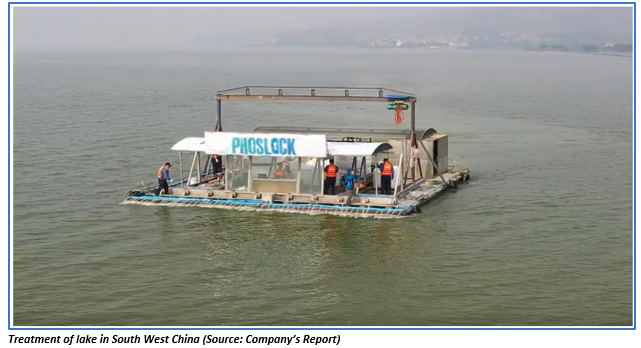 This lake sprawls in an area of 34 km2 and is circa two-thirds the size of Sydney Harbour area.

Due to the excellent trial results, an initial order of Phoslock worth +/- $1 million is currently applied to a section of the lake. Authorities would evaluate the outcomes, during the early part of June this year, wherein the company is expecting that it would be given the approval to apply alike monthly dosages thereafter.

There are 9 Very Large Lakes in the region, where all of them are going through significant water pollution issues. These 9 lakes comprise of the South West China Lakes Project Area. Both the Provincial, as well as the Central Chinese governments, are urgently looking for the restoration of the quality of water of these 9 lakes and enhance tourist and economic development.

At present, the company is reviewing the rate of production of Phoslock at its Changxing factory for meeting the expected demand for various larger projects in China and abroad.

Mr Laurence Freedman AM, the Chairman of PET, considers it as another landmark in the evolving progress of Phoslock material as well as the company. He also highlighted that these lakes were so large that it could not be treated in a single application. For treating these lakes, Phoslock material would be applied progressively and take some more years. However, this rate and the number of lakes treated could vary not only in this zone but also throughout China and in the global arena. Therefore, PET expects an increasing income on a monthly basis from these very large water bodies, which are independent of other sources of income.

On 3 May 2019, PET had released an update to the market, providing the financial, as well as operational summaries along with the key drivers of the business mentioned during the Annual General Meeting of the company.

In its March 2019 quarter report, declared to the market, PET mentioned that the cash receipt from the customers was of $10 million. The net cash from the operation for the period was $6 million. The company highlighted the three major trials on very large projects, which was under progress.

During the March 2019 quarter, there was a net cash inflow of A$6.053 million from the operating activities of the company. The primary source of cash inflow was through the receipts from the client. The company also made payment in the form of research and development, product manufacturing and operating costs, advertising and marketing, leased assets, staff costs along with the administration and corporate costs.