Is Slack the new IPO investors had been eyeing at?

Slack Technologies Inc. (NYSE: WORK) caters to the cloud-based tools and services that simplify workplace collaboration. On 26 April 2019, the company had filed an initial public offering with the U.S Securities and Exchange Commission; the company just went public last week and what happened next has become the talk of the share market buffs.

The hot news: On its market debut at the New York Stock Exchange, the shares of the cloud enabled workplace collaboration tool soared up to a 48.5 per cent high post opening at a share price of $38.50 (which was above the reference price set of $26 by NYSE). With this, the company’s value was recorded at over $23 billion.

Before we delve into this buzzing market update, let us understand the company a little better:

About Slack: Slack Technologies Inc. is a business centred messaging and communications platform. It enables collaboration on documents, groups and themes and can be compared to a group chatroom. Slack’s co-founder is Mr Stewart Butterfield, who is also the CEO and Chairman of the company, currently. He is also the founder of Flickr, which was later bought by Yahoo, for approximately $22 million. The other co-founder and present CTO of Slack is Mr Cal Henderson.

Slack started its business as a gaming firm in 2009 as Tiny Speck with the name changed to Slack Technologies Inc in 2014. With time, it foresaw opportunities in commercializing the messaging software, which had been developed by the firm as an alternate to traditional e-mail called the Journal notes. Presently, the company’s registered office is in San Francisco.

The company is amongst other tech companies like PagerDuty, Zoom, Lyft, Pinterest and Uber to go public this year. 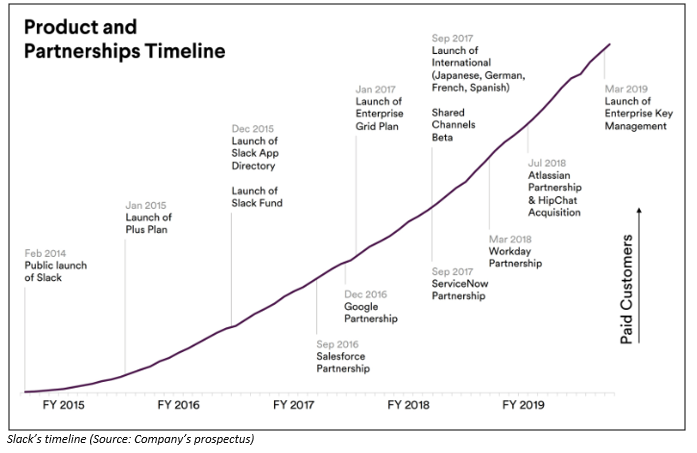 Slack’s financials: The company had recorded a revenue of $400.6 million in the fiscal year ending 31 January 2019. This was up by 82% on the prior comparable period. However, on the flip side, the company incurred a net loss of $140.7 million for the year ending 31 January 2019, close to its loss of $140.1 million in the prior comparable period. The company’s cash, cash equivalents, and marketable securities at the end of this period amounted to $841.1 million. 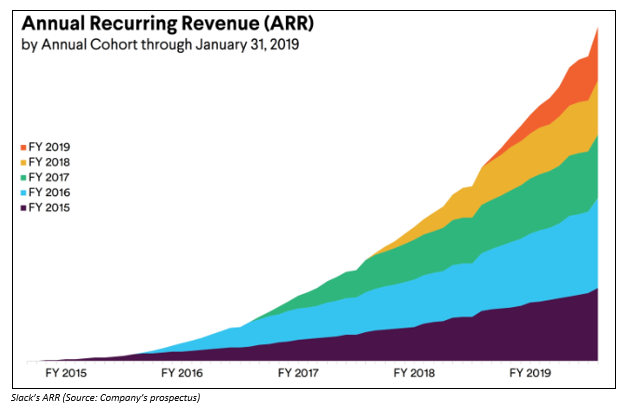 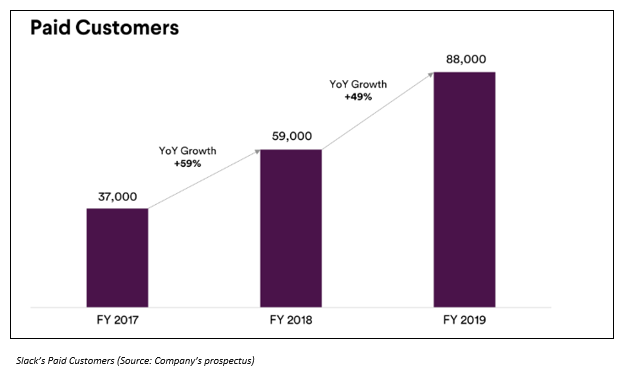 Share market Debut: Slack chose the medium of an unusual direct listing rather than a regular IPO which indicates that it did not possess any bank’s underwritten offering with no sale of new shares. New companies usually choose this methodology (floating existing private shares onto a public exchange) to save the charges that they would have to incur while conducting the IPO formalities, like the investment banking fees and other restrictions on insider stock sales. Furthermore, according to industry experts, considering that the company already has more than $800 million in cash on hand, this method was apt enough to make its debut.

Market experts suggest that Slack is the second large tech firm to pursue this route, after Spotify got itself listed directly last year.

The company started its trade on 20 June 2019, with the New York Stock Exchange under the symbol of WORK, at the market capitalisation amount of $19.5 billion. Slack commenced the day’s trade at a price $38.50, almost 50% up from the reference price ($26).

Market implications: After a significant and memorable debut on NYSE, market experts suggest that the company’s debut could have an impact on larger technology companies such as Airbnb Inc, which is likely to take Slack’s approach to getting listed and public, in the days to come.

Slack’s Shareholders: Slack got listed with 2 classes of common stock- Class A and Class B. Class B shareholders hold 10 votes-per share and each share possesses the flexibility to be converted into Class A (1 voting right) any time. This group comprises of Slack’s founders, Board members and major investors (few of them being Accel, SoftBank and Social Capital, as per the company’s prospectus). The company’s largest shareholder is Accel, with 24 per cent stake in the company, owning approximately 120 million shares.

The company’s debut is a sign that the market for workplace messaging tools is taking a great turn. This fact gets cemented as Mattermost, which is a messaging app meant for industries that require privacy and security, closed its $50 million series B funding last week. It should be noted here that the master player Microsoft is already in the market.

As it is a solution to business’ core problem of having way too many emails, the company is likely to be an attractive entity as per market expectation. Enterprise cloud communications companies are topping the technology sector and are most likely to be amongst the best IPOs of 2019. An example of this can be cited when Zoom Video Communications Inc. had doubled its share price on its debut, earlier this year.

A study by the International Data Corp. suggests that the global market for enterprise collaboration is most likely to have grown by 12 per cent in 2018, amounting to $2.4 billion and it seems to be progressing well on track to record $3.2 billion by 2021.

Investors seem to be closely eyeing the newbie, Slack in the market. Even though the company is yet to furnish any profits post its debut, it has been the talk of the day, for all the good reasons.

It should be noted that the company has a good competitive environment with players like Microsoft’s Teams, Flock and Mattermost.

Slack’s public listing followed IPOs in the related space: Zoom in April and Fastly in May. How well will these companies compete with big players like Facebook, Apple, Google and Apple, will be an interesting watch.