In this article, we discuss two REITs from the real estate sector in Australia. These two REITs have reported the full-year results for the year FY2019 on 21 August 2019. Both these REITs distribute income quarterly. Specifically, Aventus Group (ASX: AVN) is engaged in the management of retail real estate assets, which includes shopping malls, stores etc. Whereas, APN Industria REIT (ASX: ADI) is engaged in the management of industrial real estate assets, which includes office parks, technology hubs etc.

Reportedly, the increase in revenues was attributed to increased rental income, other property income, and property management fees from the management of Kotara Home (North) for the period started 1 October 2018 to 30 June 2019. The Net tangible assets (NTA) per security was down to $2.15 as of 30 June 2019 compared to $2.38 as of 30 June 2018. 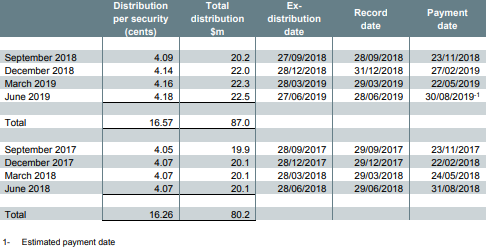 Investment Property Portfolio: As per the release, the group owned 20 large format retail investment properties across Australia with a combined value of $1.97 billion as of 30 June 2019, and the weighted average capitalisation rate of the portfolio was 6.7%. Besides, the net fair value gains on the portfolio for the year ended 30 June 2019 was $39.5 million compared with $78.2 million in 2018.

Debt Portfolio: Reportedly, the gearing increased from 35.6% as of 30 June 2019 to 38.7% as of 30 June 2019, and this was attributed to the acquisition of APG group on 1 October 2018. Besides, the management of the group is considering initiatives to manage gearing in the future financial periods.

Consequently, these refinancing activities mean no debt expiry before May 2022, and the debt maturity profile as of 30 June 2019 is in the below figure.

Asset Performance: Reportedly, the opportunities to improve the range of offerings for shoppers through tenant remixing resulted in the negotiation of 141 leases covering 108k sqm with an occupancy rate of 98.4% across the portfolio. Besides, these leases were achieved with positive leasing spreads, low incentives, and delivered strong like-for-like NOI growth of 3.5%.

Meanwhile, the group has been focusing on everyday needs, products and services such as food, health and wellbeing while introducing new tenants. Further, over 70% of the 33 tenants introduced to the portfolio were from Everyday needs category.

Outlook: Reportedly, the focus of the group for the ongoing 12 months period is to actively diversify the tenant base with priority on increasing everyday-needs to improve the weekday traffic while energising the groupâs centres. Besides, the group intends to continue investments in the development and expansion of the portfolio to improve shopper experience while tapping the attractive development returns.

Further, the group would maintain efficient capital management to enable the implementation of its strategies. More importantly, considering the prolonged momentum from the portfolio, the group expects FFO per security growth of 3-4% or 19 -19.2 cents per security in FY20. 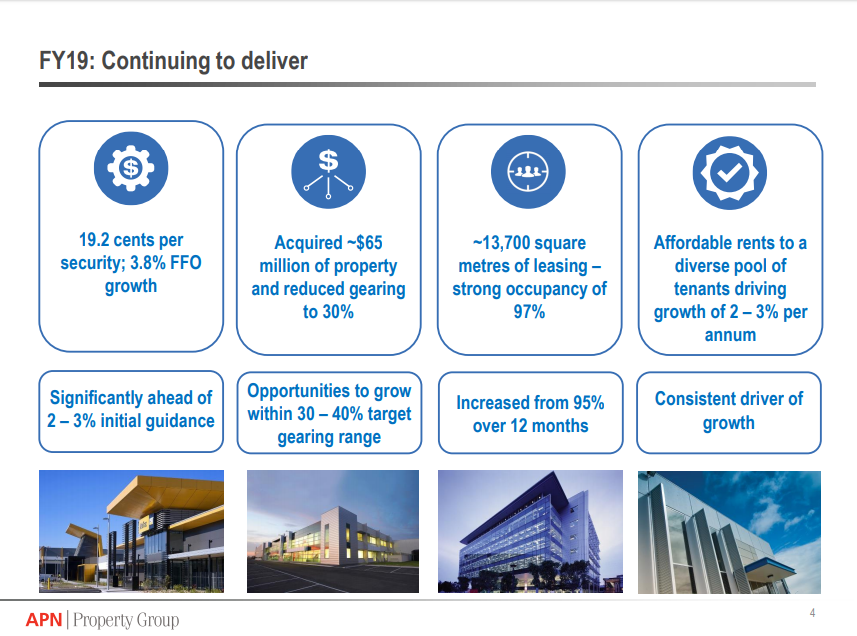 Besides, the fall in net profit was driven by non-cash accounting related adjustment, including fair value, straight-lining and tax items, and these items were $19.9 million lower compared to the previous full year 2018.

Meanwhile, the FFO increase of approximately $1.5 million was attributable to revenue from contracted leases across the portfolio, new leasing, and new acquisitions, increasing rental by 9.2%. The NTA gains on 1 cent were due to valuation gains of $10.8 million, which were offset by stamp duty costs on new acquisitions, and derivative fair value movements of $8.5 million.

Property Portfolio: Reportedly, the group had improved on portfolio diversity and scale in FY2019 backed by the acquisition of seven properties for $64.5 million, with an average WALE being 4.9 years with long-standing successful businesses with an attractive average yield of 6.6%.

Besides, the group witnessed record levels of leasing activity in FY2019 supported by 53 deals across 13,700 square metres. The company has been focusing on client needs, which helped to generate higher volumes while improving the depth of the tenant base.

Meanwhile, the group has been focusing on sustainability, in this regard, it installed over 1.8 megawatts of solar, which provides an average of 52% of power consumption during peak energy periods. These investments have been generating yield on cost exceeding 15% while reducing the carbon footprint by over 720 tonnes.

Overview & Outlook: Reportedly, the portfolio consists of over 80% of leases with fixed annual reviews of 3% or more, and the revenue is based on pure rents received, which reduced the volatility of income stream. The company is carrying a gearing of 30%, which is at the lower end of the group range of 30-40%.

Besides, a low gearing provides flexibility to pursue potential acquisition opportunities. The group has been allocating capital with discipline over the recent period and considers opportunities with the ability to generate growing income stream over the long term.