Diversification can be done by investing in different types of securities. This strategy of diversification may be helpful for those investors who try to reduce their investment risk. Diversified stocks are the combination of stocks, resulting as fixed income assets, containing different types of commodities. A typical diversified portfolio of investors may help them to yield higher return with the least amount of risk.

Let us now discuss a few diversified stocks to invest in:

Pilbara Minerals Limited (ASX: PLS) is the biggest producer of Australian lithium - tantalum, listed on Australian Stock Exchange. The company is considered in the top 200 companies in Australian ASX200 index. Also, Pilgangoora Lithium â Tantalum project is wholly owned by the PLS, which is located in Western Australia, Pilbara region.

On 5 September 2019, the company made an announcement that the suspension of trading in the securities of PLS had been be lifted, following the PLSâ release with regards to the capital raising.

Further, the company updated on the conclusion of A$36.5 million Institutional Placement.

A few highlights of the update are as follows:

On 4 September 2019, PLS released a presentation on equity raising of A$91.5 million. The proceeds would be used to improve financial flexibility since the Pilgangoora Project is at ramp- up stage and provide funding to PLSâ preliminary ~21 percent investment in POSCO lithium chemicals joint venture and so forth.

Also, on 27 August 2019, the company notified that it had implemented binding terms sheet with POSCO to move ahead with the establishment of integrated Joint Venture in South Korea region to progress and manage a 40ktpa Conversion Facility.

Operation & Financial Summary for the FY 2019

The company announced the result for FY 2019 period closed 30 June this year, on 23 August 2019, and below are the few highlights of the results. 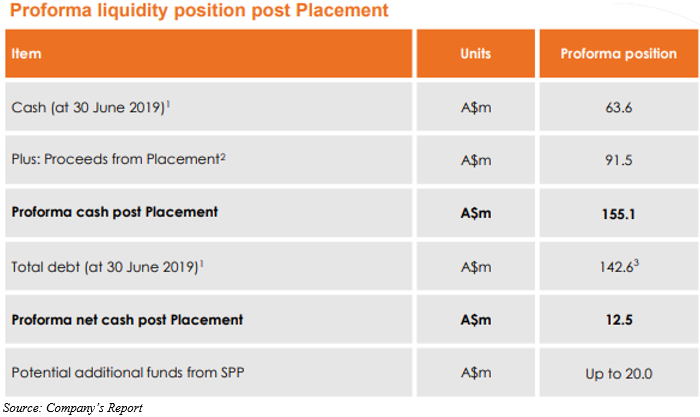 PainChek Limited (ASX: PCK) is engaged with providing products assessing pain and services that aids in enhancing the life quality of people who are in pain. The company has developed PainCheckÂ® tool which is used to identify the presence and level of pain. It also helps to oversee the effect of treatment to improve the complete care.

On 5 September 2019, the company announced the hiring of the Head of UK Business Development, Mr Pete Shergill for PainCheck UK Limited. This would aid the company to build the UK market presence. Mr Shergill has 10 years of experience in health care sector. Mr Pete Shergill would be issued with the incentive which include 3,000,000 options, in line, with the companyâs ESOP, which is exercisable at $0.21 and would expire in 4.5 years along with the vesting conditions.

On 28 August 2019, PCK released full-year results closed 30 June this year, and some of the highlights of the period are as follows:

On 6 August 2019, the company notified the market that it received a Singapore regulatory clearance. Further, it announced that it had inked a deal with Allium Healthcare Holdings Pte Ltd, which develops and operates Allium Care Suites.

On 5 September 2019, the company had announced on the trading halt on its securities pending a release of an announcement associated with West Erregulla-2 well report.

However, on 6 September 2019, STX notified the market that Strike-Warrego Energy limited (ASX: WGO) Joint Venture had demonstrated major gas discovery in the High Cliff sandstone, as a portion of the West Erregulla-2 drilling work. Further, gas saturated High Cliff with 10 metres of net pay and porosities were up to 16 percent. The gross High Cliff gas column was at least of 22 metres. STX also mentioned that the drilling work in the well has now been concluded at 5,100 metres.

The company holds 50% stake in the joint Venture in EP469 and the other 50% is held by WGO. STX would continue drilling High cliff formation till they reach the Holmwood Shale.

On 27 August 2019, the company announced that Strike â Warrego JV has made a gas discovery in Kingia sandstone, which is a part of West Erregulla â 2 drilling work.

The company further updated the market that it had inked a deal to acquire the Australian and New Zealand businesses- Spotcap ANZ of international SME or small and medium-sized enterprise lending provider Spotcap Global, offering substantial capability in the SME area.

On 26 August 2019, Z1P announced that it had priced the first issuance of Zip Master Trust. This was the biggest issuance in the Australian fintech space and a considerable achievement for Z1P.

According to Peter Gray, CCO & Co-founder of the company, the transaction would help to provide strong validation toward its proprietary credit and fraud decision platform. It would act as an important milestone for Zip. The deal settlement was expected to conclude on September 5, 2019. 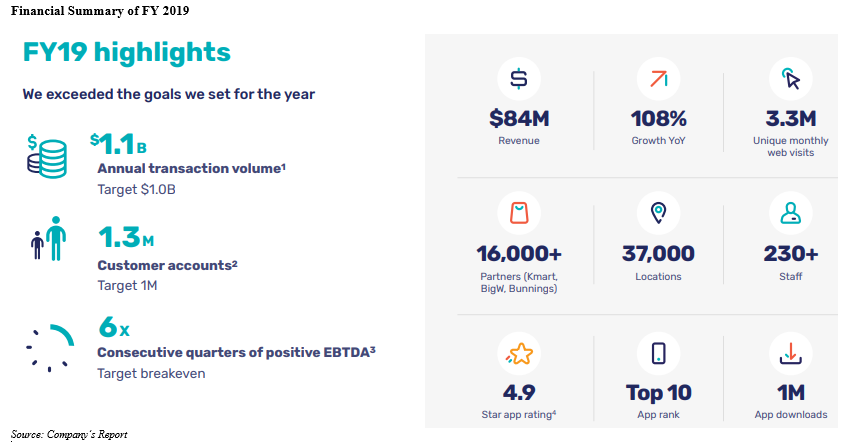 CLICK HERE FOR YOUR FREE REPORT!
All pictures are copyright to their respective owner(s).Kalkinemedia.com does not claim ownership of any of the pictures displayed on this website unless stated otherwise. Some of the images used on this website are taken from the web and are believed to be in public domain. We have used reasonable efforts to accredit the source (public domain/CC0 status) to where it was found and indicated it below the image.