Emerging energy company Eon NRG Limited (ASX: E2E) has an asset portfolio of exploration and producing oil and gas assets located in onshore USA basins in the states of Wyoming and California.

For quite some time, the company is engaged with the development of the Govt Kaehne #9-29 well, the first well to be developed in the Powder River basin (PRB) leases. The PRB leases were acquired in September 2018 for 10-year duration with no drilling commitments and high net revenue interest (NRI) of 87.5%.

On 11 September 2019, the company announced that as part of its strong capital discipline, it is considering offering a portion of its interest in the Govt Kaehne well to industry partners. This was intended to provide it with necessary capital for the completion of the well without raising additional capital by issuing more equity or increasing debt.

Eon has now finalised agreements with eight parties to acquire a minority interest in the Company’s Govt Kaehne #9-29 well.

Eon will remain the operator of the well, with the JV participants each contributing to ongoing costs, including drilling and completion costs, in proportion to their respective working interests.

Eon’s Board believes that the sale of a minority interest in Govt Kaehne #9-29 well will provide the best outcome for shareholders. Further, this will de-risk the development program for Eon and will ensure that the company has sufficient capital resources to drill and complete the first Powder River Basin well.

As reported by Eon, the JV partners are experienced investors and are well-versed in the drilling of oil and gas wells, from potential risks to the rewards reaped.

Eon’s chairman, Mr. Matt McCann and Managing Director, Mr. John Whisler have agreed to acquire a 10% and 3% WI respectively in the well, demonstrating their confidence in the success of the well.

Besides, there are further six unrelated minority JV partners who are participating directly in drilling of the well.

“This is a material commitment that we have made in the Company and demonstrates our confidence in the long-term potential for this well”. 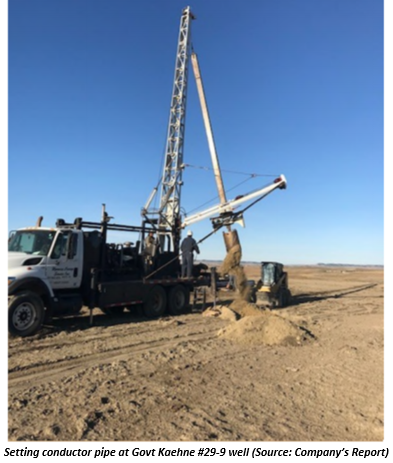 Eon selling minority interest in the Govt Kaehne #29-9 well demonstrates its strong capital discipline approach. Now that the funding arrangements has been finalized, Eon believes that the site is ready to start operations. Capstar #312 rig will be mobilized to site to commence the drilling of the well on Capstar #312 rig completing its current drilling commitments.