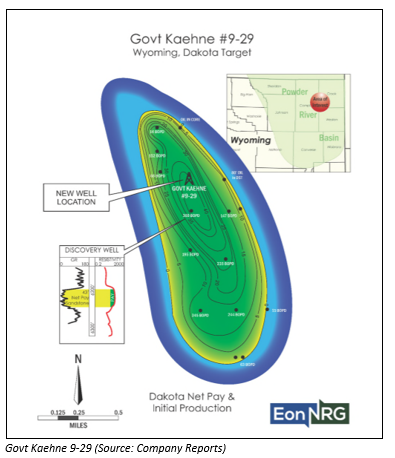 In an announcement made on 25th July 2019, the company confirmed that the permitting has been approved to drill the Powder River Basin (PRB) well, Govt Kaehne 9-29 and the ground on the well has been broken to commence the building of the well pad and access road for the new well. As per the release, it is expected that the Spudding of the new well will occur in September 2019. 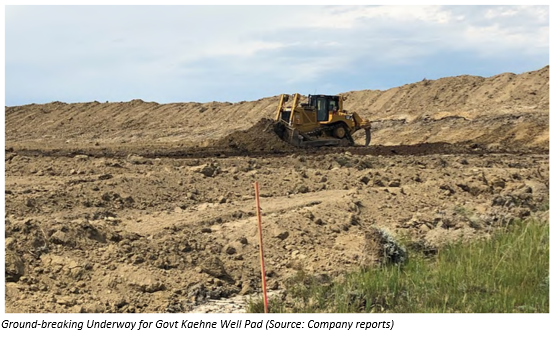 Following the release of this news, the stock of Eon NRG skyrocketed 25% by the end of trading session on 25 July 2019.

The application for the permit to drill (APD) was filed last month as announced on 6th June 2019, following the finalisation of all the necessary surveys, environmental studies and surface use agreement.

The company has high hopes for its Govt Kaehne 9-29, as offset wells generally have good initial production rates and estimated ultimate recovery (EUR), plus the well is located in a structurally high position in a reservoir, which is oil-rich with 30-40’ of pay expected in the Dakota Formation.

The company intends to drill the Govt Kaehne 9-29 to a depth of ~6,300 feet. It is expected that it will take around 12 days for the well to reach to its total depth. Once the total depth is reached, drill stem testing (DST) and open hole logging will be performed to evaluate the reservoir deliverability. It is anticipated that it will take another 45-60 days for the company to complete the well for production.

In Q1 cash flow report, the company estimated that in June Quarter, it would receive around US$1,152,000 of cash as receipts from customers. The estimated cash outflow for the June quarter included US$76,000 for exploration and evaluation activities, US$418,000 for production, US$262,000 for staff costs and US$162,000 for administrative and corporate costs.

About Eon NRG: Eon is an experienced, low cost oil and gas production company, which has the potential to add significant production from the upcoming drilling program. Over the past few years, the company has worked hard to develop value-creating opportunities. In addition to the PRB project, the company’s oil and gas division has several other assets which include Borie Oilfield, Silvertip Field and California Oilfield.

Along with the oil and gas division, the company also has a battery minerals division, from which the company intends to provide a range of new technologies, energy supply and storage solutions in the future. Last year, the company secured rights over 42 lode claims covering 840 acres of land in the Stillwater Range, Nevada, covering a number of historic mine workings. The company is planning to continue its low-cost exploration activities on Nevada prospects and has an intention to cater to the growing demand of the battery minerals in the future.

Laon Facility Renewal: In the month of June 2019, the company announced its decision regarding the extension of existing loan facility’s maturity date from ANB Bank for three months under the existing terms and conditions. The extension is expected to provide more time to the company for assessment of its Govt Kaehne 9-29 well and PRB prospects.

Senior Management Appointment: In June 2019, the company announced the appointment of industry veteran, Simon Adams as an Executive Director. It is expected that Simon’s extensive experience of working with both private and public companies as well as his finance and corporate knowledge will add value to the company’s Board.

In the month of May 2019, the company announced the appointment of highly experienced, Matthew McCann as a Chairman, following the retirement of Mr Stowell. In his 25 years of experience, Matthew McCann held various senior level roles in big private and public companies, making him a valuable member of the Board.