According to the company’s previous announcement dated 21st March 2019, the company made a bid of around US$188,000 as a bonus bid, wherein the company has 100% working interest along with 87.50% net revenue interest in the South Marsh Island Block 60.

In the period of 1976 to 2006, the company concluded nine wells for the production on South Marsh Island 60, which produced 385 billion cubic feet of gas with 787,000 barrels of oil. South Marsh Island 60 (or SM60) lies within the area of lately announced RTM reprocessing project, which was used to evaluate the prospect potential on the block. 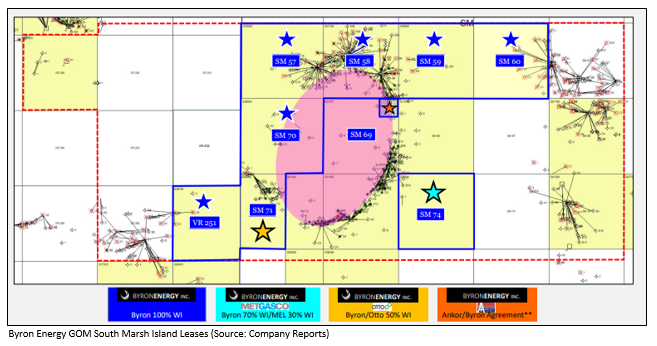 In terms of the company’s previous announcement dated 27th May 2019, BYE operated SM74 D-14 well, which is the first test well on the South Marsh Island 74 block, was drilled to a depth of 3,510 ft Measured Depth with a true vertical depth of 3,464 ft, and the surface casing was set and cemented in place. The company further pointed out that SM74 D-14 exploration well is currently drilling ahead with 4,490 ft Measured Depth. In addition, the well is being drilled from Ankor’s SM73 D platform utilising the White Fleet Drilling 350 jack-up rig.

The company earlier provided more details on the Raptor prospect, which is being drilled by SM74 D-14. The Raptor prospect will be drilled to a depth of 16,464 ft Measured Depth and South Marsh Island 74 D-14 well will test three multiple seismic amplitude supported target sands. The SM74 D-14 well is anticipated to be drilled to a depth of 16,747 ft along Measured Depth with the total vertical depth of 14,726 feet and will take around 50 days to drill from spud.

Additionally, the company farmed-out a 30% working interest of SM74 to Metgasco prospect on standard terms of the industry, as per which, BYE will be paying 60% and Metgasco will earn its interest by paying 40% of the $11.4 million initial well dry hole costs. After the initial well is drilled to the total depth, the company and Metgasco will also be bearing their respective costs of 70% and 30%, respectively. BYE is the operator of well via its wholly-owned US subsidiary Byron Energy Inc.

Turning to the Quarterly Report of the company. BYE presented its rectified quarterly report on 30th April 2019. The company has highlighted that its share of oil and gas production from SM71 and SM58 E1 well stood at 107,995 barrels of oil and 274,511 mmbtu of gas for the March 2019 quarter and the net revenues from SM71 and SM58 was around US$6.7 million. In the March 2019, BYE inked a Letter of Intent with SM69 leaseholders to drill an SM69 E2 development well off the recently acquired E Platform to earn an interest in the north-east portion of the SM69 lease block. 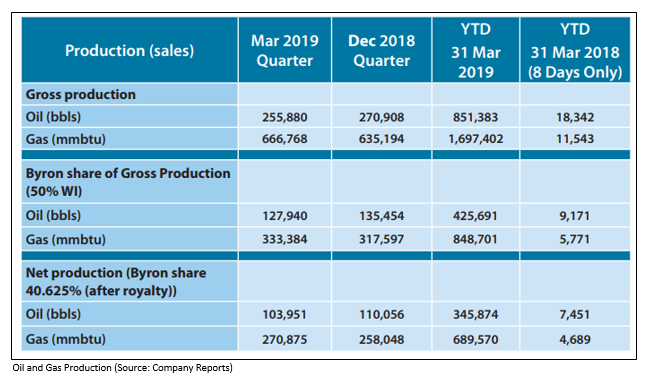 The net cash from operating activities stood at $7.762 million, including $1.262 million of exploration and evaluation expenses and $0.640 million of administrative and corporate costs. 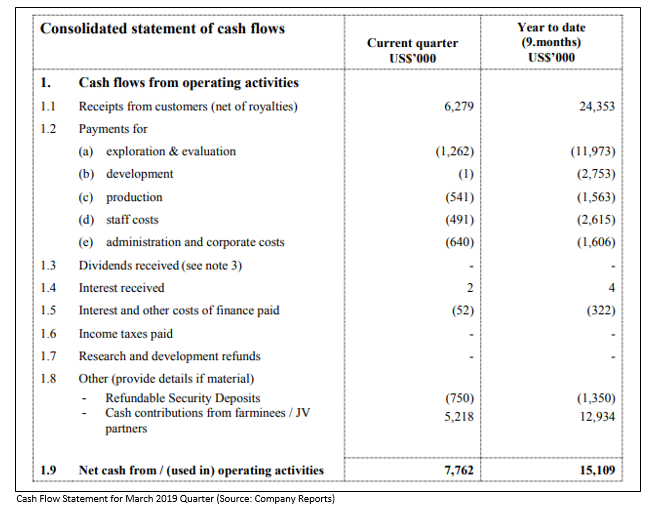 During the March 2019 quarter, the company realised an average oil price of US$54.69 per bbl subsequent to the uplift for LLS (Louisiana Light Sweet crude) price differentials and deductions for transportation, oil shrinkage and other applicable adjustments as compared to US$60.89 per bbl and US$67.72 per bbl, respectively for the December quarter.