BPH is progressing rapidly with its growth-driven strategy in resources, biotech and medical cannabis space. Let us take a quick look at each of its investments in these sectors below:

In the biotech sector, the company owns 4.43 per cent stake in Cortical Dynamics Ltd and 20 per cent interest in Molecular Discovery Systems.

In a major milestone, Cortical has already received the CE mark, Korean KGMP Certification and the Therapeutic Goods Administration (TGA) approval for BARM.

Molecular Discovery Systems has been engaged in the validation of biomarkers and drug discovery for disease, therapy and diagnostics. The company intends to validate tumour suppressor gene HLS5 as a novel gene, particularly for liver cancer.

BPH has recently flourished into the medical cannabis space via investment in Patagonia Genetics Pty Ltd (PG Aust). The company has secured 10 per cent interest in PG Aust, along with an option to secure 49 per cent total shareholding in PG Aust via a terms sheet.

BPH has made tremendous progress so far on the operational front, backed by its significant investments. In addition, the company has delivered strong performance during the year ended 30th June 2019.

The increase in revenue was driven by the interest accrued by BPH on its secured loans to its investee companies. Net cash outflow from operating activities stood at $487,427, against prior corresponding period’s outflow of $466,968.

BPH’s debt to equity ratio for FY19 was reported at 0.13x, representing an improvement on prior corresponding year’s ratio of 0.16x. The above reduction implies a financially stable business with a lesser risk for the company’s creditors and investors in comparison to the previous year.

As per the Annual Report, the debt reduction was undertaken through the issue of 282,000,000 fully paid ordinary shares for cash. Proceeds from the issue were also utilised for other purposes such as making investments in oil and gas, medical devices and biotechnology.

Over a period of 5 years covering FY15 to FY19, the company reported top-line CAGR growth of 5.5 per cent, with FY15 and FY19 revenue amounting to $224,420 and $278,227, respectively. Although revenue in FY16 declined at a rate of around 19 per cent, it started gaining momentum in the subsequent years. The highest increase during the five-year period was reported in FY17, representing an increase of 19.3 per cent on the previous year. 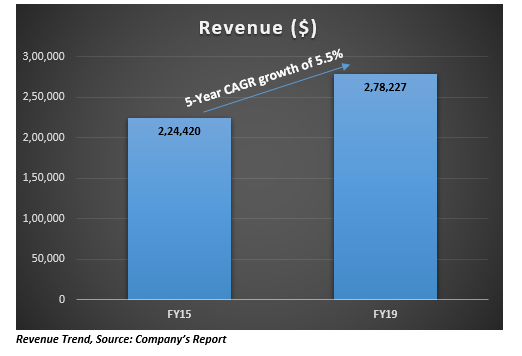 Gross margin over the five-year period also witnessed a continuous upward movement. In FY19, the company has a gross margin of 64.1 per cent as compared to prior corresponding year’s margin of 56.9 per cent. Considering the gross margin of 9.7 per cent in FY15, the margin has improved significantly over the above stated period, demonstrating sound financial health of the company. 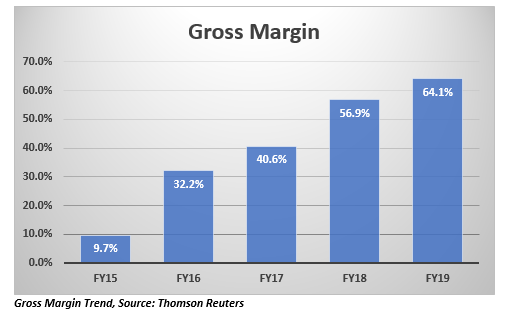 It can be seen that BPH has delivered robust financial performance in the last five years, driven by significant improvement in its revenue and gross margin. The company’s performance indicates that it is well positioned to progress further with its diversification strategy.