On 24 May 2019, Audio Pixels Holdings Limited (ASX: AKP) provided an update regarding the recent adjustments made to MEMS fabrication process, that generated wafers of sufficient quality for beginning the acoustic characterization phase.

The initial measurement confirmed that the past issues related to the stiction and shorts seemed to be resolved. However, the company had to suspend the next steps of acoustic testing, on a temporary basis due to rare system glitch in the prober, which led to the destruction of the wafer.

AKP anticipates that it will continue with the acoustic characterization once they receive the replacement wafers from their vendor in early June 2019. These vendors hold numerous dozens of wafers in the pipeline during various stages of fabrication.

Also, in its earlier announcement dated 9 April 2019, the company had updated its shareholders that the enhancement of the fabrication processes was in its last stages, with a newly refined batch of “full structure” based wafers.

On 29 April 2019, the company released an institutional roadshow presentation, where it highlighted about its product Audio Pixels Speakers, its features, the way it works and its core value proposition.

The company’s product Audio Pixels speaker is a MEMS chip with ~ 1mm width. This chip is an alternative to the conventional speaker driver(s), enclosure or acoustic chamber, along with the electronic circuitry which changes the digital signal into an analog signal using a D2A along with the Power Amplifier.

This Audio Pixels speaker chip is not only radically smaller, but it also uses less power and in return, produces an improved audio performance. The chip gives a clear sounding that is less distorted and has more accurate sound reproduction. 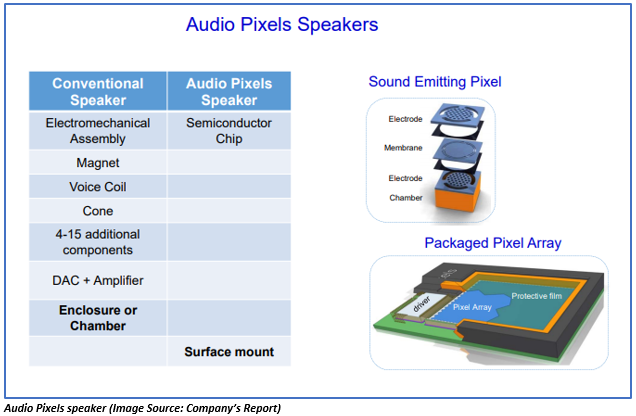 The Precision reconstruction of any frequency or wavelength is made possible via digitally controlling method which Pixels actuate (or don’t actuate) and at any given moment. 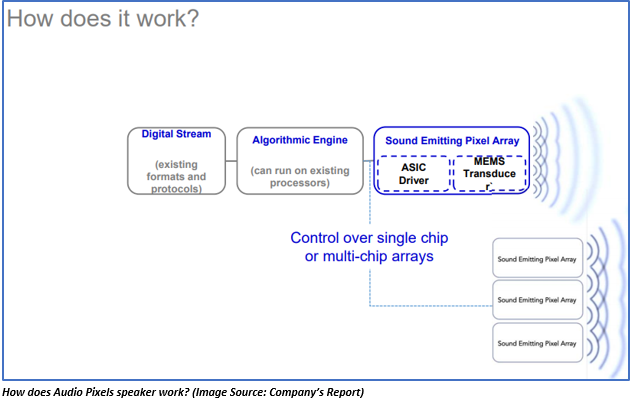 Pixels are of two types and are as follows:

Pixels have been transforming industries and would continue to do so. For the current and future applications and markets, both Display and Sound pixel will be used in television & display, mobile communications, portable computing, IoT & wearables, in-vehicle infotainment, man machine (MMI) and digital signage. The Sound Pixel would be used in loudspeakers.

In the Q1 FY2019 report ending on 31 March 2019, the company used net cash of A$1.028 million in its operating activities. The company made payment for research and development, staff costs along with the administration and corporate costs.

The net cash used by the company in its investing activities during the period was A$0.056 million. By the end of the Q1 FY2019, Audio Pixels Holdings Limited had net cash and cash equivalent of A$9.927 million. The total estimated cash outflows for Q2 FY2019 was A$1.560 million.