West Perth, Australia-based Galan Lithium Limited (ASX: GLN) has been in the limelight for its striking progress in carrying out exploration and allied works at the highly prospective Candelas Lithium Brine Project located in the Catamarca Province on the Salar De Hombre Muerto within the South America’s world-renowned Lithium Triangle. 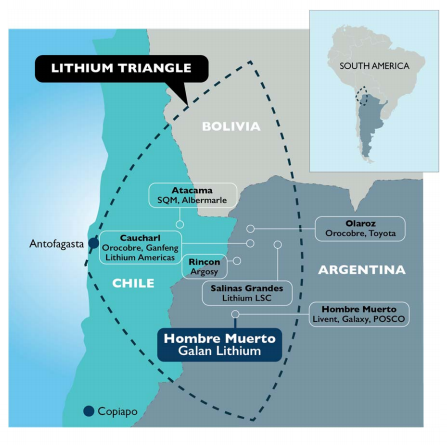 The company’s approach and success in bringing the Candelas Project from the staged-maiden drilling to investigation of the processing options for Lithium brines (as announced on 3 July 2019), within six months may be attributed to its highly experienced management team that has been leading the way throughout, providing guidance and direction.

A brief timeline of the headways achieved so far and plans ahead is illustrated as below. 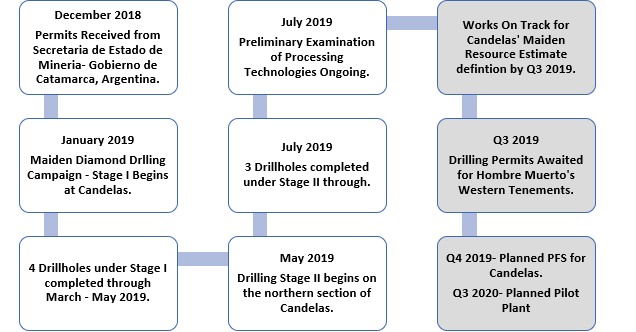 More on the Candelas Project, Stage I and Stage II drilling at can be READ Here.

It is believed that the key management personnel are largely responsible for formulating policies, managing goals, planning and coordinating functions and are basically the ultimate source of authority. The Board not only issues important instructions for the preparation of department budgets, procedures, schedules etc. but also controls & coordinates the activities across all the departments. It is the key point of contact with the outside world. In addition, the Board is also responsible towards the stakeholders for the performance of the enterprise.

Galan Lithium is at the starting point of an important value chain concerning the use of Lithium in manufacturing of Lithium-Ion batteries (LIBs) which are a key component in electric vehicles (EVs), that are well placed for large-scale commercialisation and exponential growth worldwide.

With Tesla accelerating the world's transition to sustainable energy alternatives like electric cars, Galan Lithium’s management recognises the amazing opportunity being presented by its targeted commodity (Lithium), and has been forging ahead to capitalise on the same in the near future.

Recently, the management presented at the Lithium Supply & Markets Conference (Chile), throwing light on its ongoing activities and outlook ahead.

A quick look at the company’s distinguished and experienced Board members who are fully committed to maintaining and enhancing corporate governance is as follows.

He has also been involved in the gas to coal conversion of the Mica Creek Power station in Mt Isa and the Pasminco Century Mine in North Queensland.

Earlier in March 2019, the company informed that Mr Chalwell had acquired an additional indirect interest in the company via the purchase of 50,000 fully paid ordinary shares on market under Chalwell Pension Fund A/C at a value consideration of $ 12,323.

Mr Terry Gardiner, Non-executive Director: In addition to being on the Board of Galan, Mr Gardiner is also serving as a Non-executive Director of Cazaly Resources Limited and a Director of Barclay Wells Limited, a boutique stockbroking firm with offices in Perth and Melbourne. He holds more than 20 years’ experience of working in the capital markets, stockbroking & derivatives trading. Prior to that, Mr Gardiner had many years trading in equities & derivatives for his family accounts.

Mr Gardiner acquired an additional direct interest in the company in late March 2019 through the purchase of 100,000 fully paid ordinary shares for a price of $ 22,007 on market trades.

Mr Juan Pablo Vargas de la Vega, Managing Director: He is a mineral industry professional, having worked across various Chilean and Australian companies with a prior Board experience of 15 years in ASX-listed mining companies, stockbroking and private equity firms. In addition to that, Mr JP has been a specialist lithium analyst in Australia, has also operated a private copper business in Chile and has also worked for BHP Group Limited (ASX: BHP), Rio Tinto Limited (ASX: RIO) and Santiago, Chile-based Codelco.

Besides, Mr JP is also the founder of Blue Sky Lithium, a vendor of the Argentinian assets.

Recently on 11 July 2019, the company announced that Mr JP had acquired an additional Indirect interest in the company upon purchase of 84,000 fully paid ordinary shares on market through Patiperro P/L (Patiperro S/Fund), where he is a beneficiary. The total value consideration for the interest was ~ $ 14,592.

Mr Mike Robbins, Chief Financial Officer/Company Secretary: Having worked at both operational and corporate levels in Australia as well as overseas, Mr Robbins holds a diverse experience of more than 20 years in the resource industry. During his span of career so far, he has held numerous project level management positions as well as served as the CFO and Company Secretary for companies like Cazaly Resources, Bannerman Resources (ASX: BMN), and Blackham Resources Limited (ASX: BLK).

Mr Jinyu (Raymond) Liu, Non-executive Director: Mr Liu is a qualified mining engineer with a commercial background. He is the founding Managing Partner of Havelock Mining Investment, a Hong Kong-based Investment company and has been actively involved with a number of investments in ASX-listed companies.

In addition to the above, Mr Liu is also serving as a Director of Okapi Resources Ltd and his other previously held roles include technical positions at Rio Tinto, KCGM, and Mt Gibson Iron.

Stock Performance: Galan Lithium has a market capitalisation of around AUD 20.69 million, with approximately 129.33 million shares outstanding. Today, on 16 July 2019, the GLN stock closed the day’s trade at AUD 0.180, up by 2.857 per cent as compared to its previous closing price.