The Company’s target is brine hosted lithium (+- potash and boron) mineralisation, for which the salars of the Lithium Triangle of Argentina-Chile-Bolivia are well-renowned for and constitute a major portion of global production, supplying around 50% of non-Chinese LCE (lithium carbonate equivalent) demand in 2018.

These tenements have an indefinite life as long as the work and investment plans are followed, an EIS (Environment Impact Statement) is completed (which is required to be updated every two years) and a canon, equivalent to USD 1,600 per tenement unit is paid twice a year.

Galan Lithium acquired the initial tenements (Candelas, El Deceo and Catalina) in the Lithium Triangle during mid-2018 upon the acquisition (100%) Blue Sky Lithium Pty Ltd, based in of Subiaco, Australia, with its founder being Mr Juan Pablo Vargas de la Vega, the current Managing Director of Galan.

Galan’s key target area, within Hombre Muerto and covered by alluvium, is Candelas at the south-eastern end of the Salar, covering the Los Patos Channel, a ~ 15 km long by 3-5 km wide valley filled channel that is the main source of inflow into the basin. Over the last few months since the onset of 2019, the company has accelerated its exploration activities at the project.

Today on 2 July 2019, Galan Lithium has pleasingly announced the receipt of the further assay (laboratory) results from drill hole five (C-05-19), six (C-06-19) and seven (C-07-19), undertaken under the Stage 2 drilling campaign at Candelas. Meanwhile, the brine samples from drill hole eight (C-08-19) are currently being forwarded to the laboratory and this marks the conclusion of Stage 2 drilling. 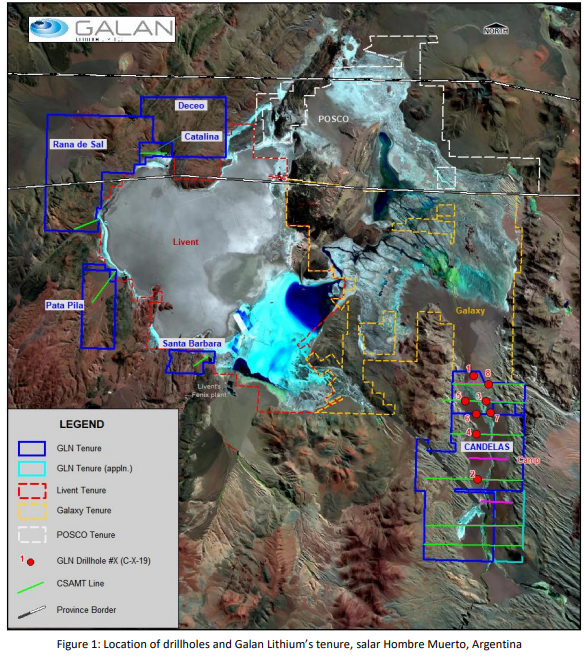 The assays confirm the presence of high-quality brines over at least a 3.5-km strike extent at the northern end of Candelas.

The latest round of sampling for drill holes C-05-19 to C-07-19 followed downhole geophysics which highlighted the preferred brine horizons to be sampled. The holes were then cased to the top of the brine horizon and pumped for between 8 to 24 hours to ensure that the sample was representative. The results from this sampling are tabulated below (Table 1) and indicate excellent lithium grades with low impurities, consistent with the prior Stage 1 drilling.

More on stage 1 drilling can be READ here.

Encouraged by the consistently outstanding results, the company applied for the permit for Stage 2 of the drill campaign and received the same in early May 2019.

The company has been proactively delivering on its plans for the Candelas Project and on track to be able to define a Maiden Resource Estimate for the northern portion of Candelas by the third quarter (Q3) of the calendar year 2019, in conjunction with its consultants SRK (Australia) and their Argentinian representatives.

The Company also holds interest in Western Projects, which are located over areas peripheral to the main Salar de Hombre Muerto, and where CSAMT surveying had again highlighted the brine potential, supported by the results of surface brine sampling. These projects include Catalina, El Deceo, Santa Barbara, Rana de Sa and Pata Pila and present another exciting opportunity for the company.

Galan has already applied for the drilling permits for its Western tenements and expects to receive approvals by Q3 2019.

As per Galan Lithium’s latest update, the drilling activities at Candelas have been paused for two to three weeks to enable the site personnel to take the necessary rest between campaigns. Meanwhile, the company is also awaiting the issuance of drilling permits to commence its maiden drilling over its Western tenements. The break will also allow for rig maintenance, further brine re-sampling, bore monitoring and site preparatory work.

In addition, the Company is also strategizing, to begin with, a Pre-Feasibility Study (PFS) into the potential development of the Candelas project.

Despite the wintry conditions, the company has persevered with its activities at Candelas due to good site preparation. Canadian-based Major Drilling, which Galan had appointed to undertake the diamond drilling campaign has contributed significantly in identifying the value at Candelas.

Pleased with the latest milestones reported, Galan’s Managing Director quoted, “We are very pleased to have advanced Candelas this far in such a short period of time, with our local team continuing to deliver despite recent adverse weather conditions.”

The international interest in Lithium has been rising since its revival in 2016, when according to Bloomberg, the Global X Lithium & Battery Tech ETF (exchange-traded fund) was valued at less than USD 550 million followed by receipt of more than USD 900 million of net inflows by June 2018.

Despite short-term gyrations, the outlook for lithium continues to stay bright with the going anticipation of an exponential increase of electric vehicles (EVs) coupled with expanding demand for lithium-ion batteries. At this backdrop of the electric revolution, junior miners offer big upside potential. Thus, Galan is operating at the right time to leverage on these developments transpiring not just in Australia but on the global front.