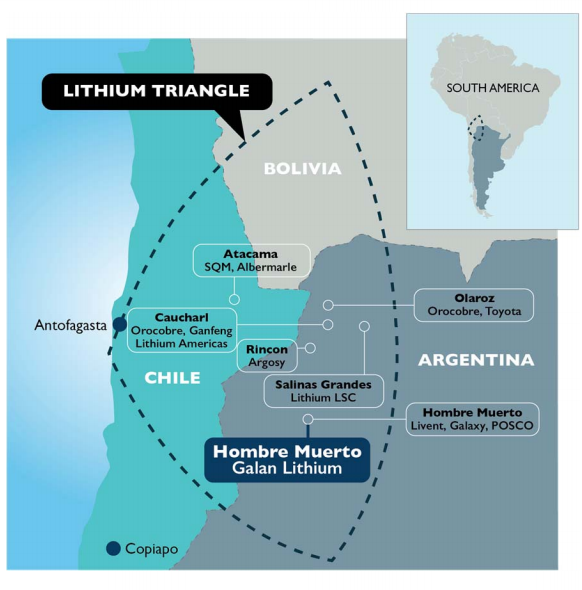 The brines within Hombre Muerto are abundant with highest-quality minimally contaminated lithium, which makes it a Tier 1 location for lithium exploration companies to operate. According to Galan, Salar de Atacama (Chile) and Salar de Hombre Muerto account for around 60% of the world’s annual production of lithium. Besides, the Hombre Muerto basin has a favourable topography and a good neighbourhood with Livent Corporation’s El Fenix operation (since 1992) and Galaxy Resources’ (ASX: GXY) Sal de Vida project, where South Korean steel-making company, POSCO recently purchased a portion for USD 280 million.

The Salar De Hombre Muerto Project encompasses around 13 granted exploration tenements, where Galan holds the rights to earn 100% interest, and all of these broadly represent six project areas spanning approximately 25,000 ha. Of the total project area, a minimum of 7,800 ha is considered prospective for brines, including a major 6,000 ha under the Candelas Lithium Brine project, which has a ~15 km long by 3-5 km structurally controlled Los Patos channel.

Delivering on its plans to unlock the potential at the new target Candelas, Galan Lithium has achieved consistent headways in this regard.

Immediately following the completion of the six-month long drilling campaign, Galan Lithium has announced today, 3 July 2019, that the company has commenced a preliminary investigation into ion exchange technologies for processing lithium brines from the Candelas Project.

The investigation comes on the back of a six-month technical review into alternative processing technologies, with the results of both to be fed into the planned Pre-Feasibility Study (PFS) for the project’s potential development.

According to Galan Lithium Managing Director JP Vargas de la Vega, a preliminary examination into processing technologies is a crucial step prior to the initiation of a PFS. He also added that the heavy brines extracted from Candelas are exceptionally high purity and the company believes that investigating lower-cost processing technologies could further leverage the unique nature of the deposit.

Each of the technologies considered by Galan have the potential to meaningfully reduce the costs of extracting lithium from brines. However, conducting due diligence into the suitability of ion exchange technologies is a long process. As a result, the company would be undertaking this work parallelly to other exploration and operational activities currently underway and adding value to the Candelas Project.

In addition to the above activities, Galan Lithium has also announced plans to investigate a more conventional processing route using evaporation, selective precipitation, purification and precipitation as Lithium Carbonate.

All these tests would be conducted over the next few months and all the inputs will be utilised for the PFS. Galan Lithium aims to define a maiden JORC compliant resource estimate for the northern portion of the Candelas project by Q3 CY2019 and the preparation for PFS will begin thereafter.

Currently, Galan is carrying-out discussions with technology companies that offer ion exchange recovery from lithium brines. Two providers have already been short-listed to conduct bench top test work. Meanwhile, the company is also assessing precipitation technologies for the extraction of lithium salts for further processing which is to be tested by an Australian technology provider.

Galan Lithium received the permits from the Secretaria de Estado de Mineria – Gobierno de Catamarca, Argentina in December 2018 to commence Stage 1 of the maiden diamond drilling campaign at Candelas in January 2019. The assays from the first four drill holes, received and analysed over the last few months, far exceeded Galan’s expectations. The results are briefed below.

The Stage 2 of the drilling campaign has recently been completed with laboratory results disclosed on 2 July 2019 (drill permits received in May 2019).

This new data confirms a minimum 3.5-km strike extent of heavy brines at the northern portion of Candelas, with holes one, three, five and six all with potential lithium grades >500mg/l Li ranging from 510-802mg/l Li and hole eight giving similar indications from field test work.

Drilling activities have currently been stopped for about two to three weeks as the company awaits the issuance of drilling permits to commence maiden drilling over the Western tenements at Hombre Muerto and further explore this exciting opportunity.