Galan Lithium (ASX: GLN) is a mineral exploration company, incorporated in 2011 and formerly known as Dempsey Minerals until August 2018. Led by a highly experienced Board, the company is focussed on exploration of lithium brines within South America’s world-renowned Lithium Triangle (Figure 1) on the Salar de Hombre Muerto in Argentina. 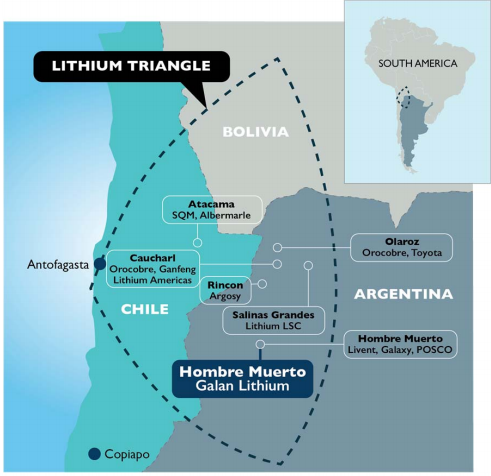 As per its capital structure, Galan has a market capitalisation of around AU$ 27.16 million with ~ 129.33 million outstanding shares. While the company’s Directors and Management hold 30% of the stake, around 55% is held by its top 20 Shareholders. The cash in hand stood at AU$ 4.65 million as of 31st March 2019.

Today, on 11 June 2019, GLN zoomed up 4.76% mid-day, settling the day’s trade at AU$ 0.205. In addition, the company has also released its Lithium Supply & Markets Conference (Chile) Presentation, throwing light on its ongoing activities and outlook ahead.

The brines within Hombre Muerto are rich reserves of highest-grade lithium with proven low impurity levels, making it a Tier 1 location. According to Galan, 60 percent of the world’s annual production of lithium comes from brines from the Atacama and Salar de Hombre Muerto. Besides, the basin has a good neighbourhood with Livent Corporation’s El Fenix operation and Galaxy Resources’ (ASX: GXY) Sal de Vida project, where POSCO recently bought a part for USD 280 million. 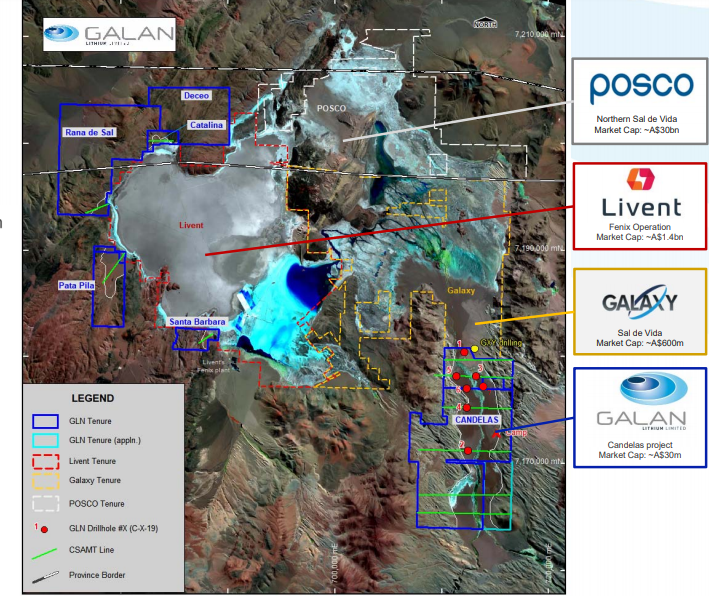 Galan holds six projects totalling around 25000Ha with potential brine coverage conservatively comprising ~ 7,800Ha in Hombre Muerto, where the topography is quite favourable for mining lithium brines, such as the presence of ground water sourcing, volcanic rocks, arid climate, hypothermal activity, closed basin and faulted environment. Besides, the requisite infrastructure including power, sealed roads and processing water are also in place.

Within the Hombre Muerto basin, Galan’s primary target is the Candelas Lithium Brine Project located in Catamarca province, including a ~ 15 km long by 3-5 km wide Las Patos channel, which accounts for ~ 79% of incoming waters and lithium into the Salar.

The project area indicates the potential to host heavy brines as confirmed by the preliminary field measurements and laboratory analyses following the recent geophysics and drilling activities.

In December 2018, the Secretaria de Estado de Mineria – Gobierno de Catamarca granted the permits for Stage 1 and the drilling commenced at Candelas Project in January 2019, when Galan Lithium embarked on a journey to unlock the potential at its new target.

Immediately afterwards, the third drillhole C-03-19 was completed to a depth of 430 m with assays disclosed in April 2019. The results included an intercept of 143m @ 784 mg/l Li with low impurities and high conductivity levels of 183 to >200 mS/cm.

On 29 May 2019, Galan reported the receipt of initial assays from the fifth drillhole (C-05-19), demonstrating good lithium grades from brine horizon (220 to 380 m), ranging between 491 -856 mg/l Li with consistently low impurity levels.

On 16 May 2019, Galan Lithium announced to have received permits from the Secretaria de Estado de Minería ? Gobierno de Catamarca for its Stage 2 drill programme at the Candelas Project, whereby the drilling for the sixth hole, C-06-19, has been completed in the northern channel section, giving encouraging results. The activities are currently on standby and are expected to resume as the weather settles.

Galan Lithium has completed resistivity surveys at four new targets in Salar De Hombre Muerto. The initial near surface water sampling has given encouraging results with several samples greater than 1000 mg/I Li. Besides, the resistivity values from the targets, which lie adjacent to Livent’s operations, are similar to Candelas, depicting positive implications for lithium grade potential.

Achievements and Indicative Next Steps

With consistent headways achieved, Galan is aiming to define a JORC compliant Maiden Resource estimate by Q3 CY2019. SRK (Australia) is overseeing the resource definition. Going forth, Galan intends to undertake a Pre-Feasibility Study (PFS) on Candelas to evaluate the production of lithium carbonate. Furthermore, a pilot plant is planned to be operating during Q3 2020, targeting the production of battery grade lithium carbonate. 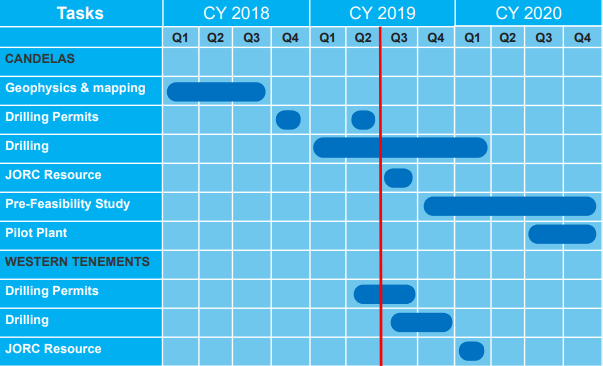 The Right Commodity, The Right Time

Galan Lithium is operating at a time when the province of Catamarca has been very supporting of lithium exploration to foreign emerging explorers, making Argentina a pro-mining and investment destination. The fixed exchange rate between US$ and Argentina Peso has been removed and capital controls are no longer in place. Besides, major export duties and trade controls have been waved off. There is a consistent royalty regime, introduced in 2017, for all minerals across most of the country.

With the electric vehicle (EV) revolution kicking in, there has been an uptick in Li demand for EV batteries. In the past two years, the lithium price has significantly risen with the current prices at US$ 10,900/t Lithium carbonate equivalent (LCE). 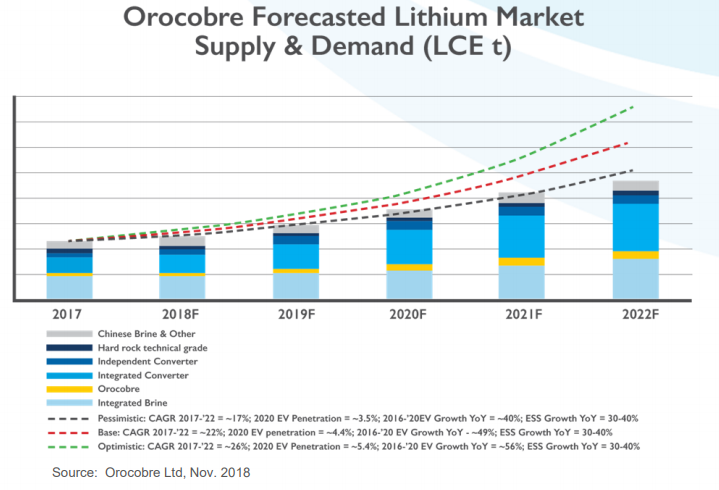