Though the market remained in the green zone on Wednesday, the benchmark index S&P/ASX200 went up slowly and ended at 5573 points, up by mere 0.24 per cent as compared to yesterday's closure of 5,559.5 points.

The market sentiments were mixed thanks to the uncertain situations around. Yesterday, the sentiments were positive due to the successful results in the initial trial of Moderna's vaccine. However, many vaccine experts have said that the company has only released a statement. Still, no data in support of such tall claims, it seems the company withholds a lot of crucial information.

What's raising many eyebrows is the silence of Moderna's vaccine partner National Institute for Allergy and Infectious Diseases (NIAID) on the successful initial trials of the vaccine.

China looks determined to deteriorate the trading ties with Australia. Latest, China is planning to target more Australian exports of wine and dairy. In a shocking comment, China has labelled Australia as "giant kangaroo that acts as the dog of the US". The export sector looks the turn of events closely, and this growing tension is undoubtedly not a piece of good news for them.

The industry that gained most today was the IT sector followed by Industrials sector and the sectors that lost maximum today were Utilities and Energy sectors.

Let's see the graph below to know about the top and worst performers of the day: 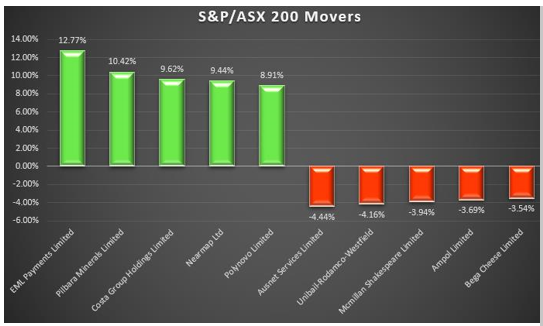