Zeolite chemicals mark its presence across many sectors such as Automotive, Water treatment, Oil Refinery, etc. The basis physical and chemical properties of zeolite make it an advanced chemical with diversified usage. Thus, the chemical serves as a basic raw material across many sectors in an economy with its application across several thriving sectors.

Aluminosilicates lose water upon heating to form a porous structure which contains large surface area, and these dehydrated aluminosilicates are known as zeolites. To further elaborate, zeolites are solids with an open, three-dimensional crystal structure built from various elements such as oxygen, silicon, aluminum, etc.

There are basically two types of zeolites namely natural and synthetic. The natural zeolites occur in volcanic as well as sedimentary rocks; while, synthetic zeolites are designed in laboratories to serve more specific purpose.

Synthetic zeolites capture about more than half of the global market share as compared to the natural zeolites, as synthetic zeolites are made to serve specific purpose such as catalysis, purification, etc, in different industries.

The chemical composition of zeolites allows easy ion exchange, as the cations (Na+, K+, Ca+, etc) with a zeolite are loosely bonded, which in turn, makes the chemical useful for the different purposes they serve across various sectors in an economy.

As a catalyst, the zeolites are used to fasten the chemical reaction in oil refining. Apart from being a catalyst, the zeolites are used in the detoxification of emission gases ,generated from semi-conductor manufacturing processes and Automotive industry. The absorption property of zeolites is used in the removal of organic compounds emitted from printing, painting and other facilities.

Water treatment facilities also use zeolites to purify the water and zeolites are used as an absorbent for nitrogen and sulphur in the high purity LPG gas generation.

The optimal pore size of zeolites makes them a good replacement of silica gel and activated carbon.

Apart from usage mentioned above, zeolites are used in many other sectors such as detergent manufacturing, electronics, etc. 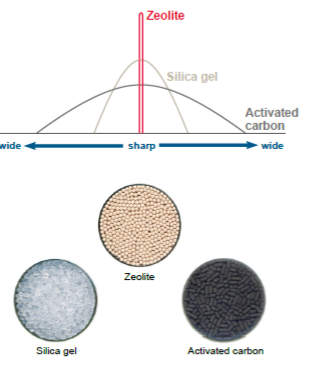 The global zeolite market is estimated by various industry experts to reach a market capitalisation of more than US$32 billion by the year 2020 amid high demand from the refinery sector. However, the growth of the sector depends upon the overall global economic conditions as the wide application of the zeolites depend upon the total industrial output from different sectors.

For example, if the automotive sector is growing, and the sector is witnessing a demand rush, it would pull the demand of zeolites as well. Likewise, if the overall economic condition thrives and demand of electronic inches up, it would again pull the zeolites demand as well.

However, in a recent status quo, the global economies are becoming more carbon resilient, which in turn, is noticing a shift for global economy towards a zero-emission economy. And, if the global economies maintain its stance in line with Euro-6 emission standards, zeolites could possibly see a demand surge amid its absorption property.

Post addressing what zeolites are and how its market is dependable on the global economic growth, let us know have a look at few Australian Exchange listed zeolite producers.

Phoslock Environmental Technologies (ASX: PET), formerly Phoslock Water Solutions Limited, is an Australian Securities Exchange listed engineering solutions and water technologies provider for the management of water quality. The company provides solutions for water treatment and to manage the nutrients in the water along with water pollutants through its range of products, which includes, Phoslock, Zeolite and Bacteria.

The product of the company helps in removing concentration of phosphorus, which aids in the proliferation of algal blooms, which in turn, compromises water quality and produces odour in the water. Phoslock, which is a bentonite composed of lanthanum binds with the phosphorus in water to improve the water quality.

The product was developed by CSIRO, which is Australia’s leading scientific organisation. The Phoslock not only binds with the phosphorus in the water permanently, it also produces an inert (non-reactive) mineral- Rhabdophane, which further becomes part of the natural lake sediments.

PET has successfully applied the product across 250 waterbodies across the globe.

PET applies certain kind of zeolites in heavy polluted water to bind with nitrogen along with its phosphorus binding Phoslock. As nitrogen is another vital source for algae growth, the removal of nitrogen and phosphorus keep the algae growth in check across the water bodies, which in turn, helps the aquatic system to remain healthy.

PET uses certain types of bacteria in the water treatment processes to improve quality of the water bodies, which marks an inflow from industry and sewerage. As few bacteria decomposes the pollutant in an aerobic (oxygen-rich) environment. Certain types of bacteria also reduce other harmful strain such as E. Coli from water by operating in an aerobic environment, which in turn, makes non-aerobic bacteria vulnerable.

PET recently secured an official recognition from the Chinese Ministry of Water Resources, and the Phoslock product of the company has been recognised in the official guide of 2019 as a technically advanced product in water conversation and remediation.

The Chinese Ministry of Water Resources is a highly regarded administrative organisation across the water conservation industry in China with most of the 2,685 lakes and 98,000 reservoirs under management.

The company also inched up the raw material procurement and advised the supplier of its bentonite and lanthanum chloride for the increased monthly volumes.

PET mentioned that the it is securing more warehousing facilities to store the higher volumes of its raw material and patent products at the Changxing industrial park in China.

Neometals Limited (ASX: NMT) is an Australian Securities Exchange listed industrial minerals and metals producer with exposure to Lithium, Titanium, Vanadium, Zeolite and many others. The project portfolio of the company includes Mt Marion, Lithium Hydroxide Project, Alphamet, Barrambie and many others.

In a recent update provided by the company, NMT mentioned that it successfully produced commercial-grade samples of Type X zeolite from the spodumene leach residue soured from its Mt Marion and third-party by its technology which is pending for patent.

The Queensland University of Technology conducted a comparative analysis on the specification of several synthetic zeolites produced by the NMT against leading commercial counterparts in the market.

The results of the test work conducted by the Queensland University of Technology were promising as it revealed that the company’s synthetic zeolites were comparable to industry leading zeolites products from a Japanese manufacturer.

The Test-Work conducted by the Queensland University was a part of the development and optimisation plan for the NMT’s technology which produces synthetic zeolites form the spodumene leach residue. NMT collected feedback on its previously provided Type A zeolite in late 2018 from market participants, which in turn, led towards bench-scale process optimisation.

Now, the Type X zeolite could be produced from the waste of lithium refineries, which in turn, signifies a lab scale breakthrough, and now, the company encourages other forms of zeolites from various lithium waste, which could meet the industry standards.

The comparative analysis results of the Test-Work are as: 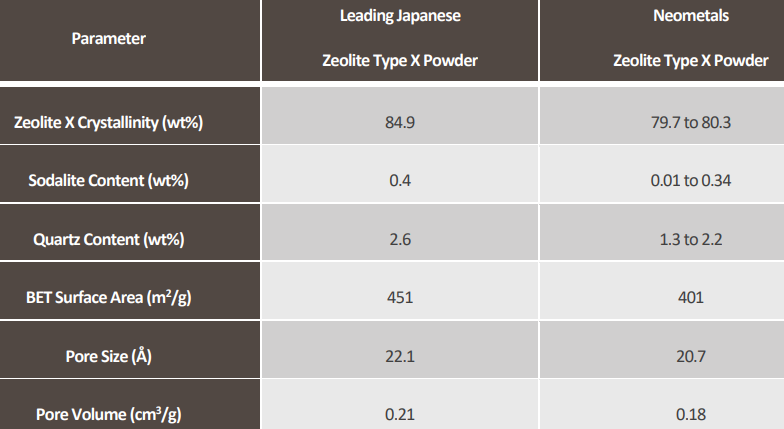 Post the success of the Test-Work, NMT now plans to take the production of its zeolites to a pilot scale, and in order to do so, the Queensland University of Technology commenced the critical equipment procurement for the pilot plant, which as per the company, is scheduled to commence in the September quarter of the year 2018.