Yank in Top Banks’ Share Prices – Wait, there is still some steam

Likewise, Nine Entertainment Co. Holdings Limited (ASX:NEC) has rallied to $1.48 from $1.37. Moreover, markets are paying attention to areas that have lagged to catch the broader rally after a severe bloodbath in March.

Banking and financial services happen to be one of those areas that has failed to catch up with the broader market rally. This week, the investor sentiment has been heavy on the sector as Big Four banks have pulled large and rare moves in share prices.

Recently, NAB reported that it increased the size of the share purchase plan to $1.25 billion from $500 million, following strong demand from the eligible shareholders. This will result in issue of around 88 million new equity shares on 2 June 2020.

New shares will be issued at a price of $14.15 per share. Ross McEwan, CEO of NAB, said that eligible shareholders have showed strong interest for the offer. In addition to the placement, the capital raised through SPP will allow the bank to strengthen its capital position during the COVID-19 crisis. Out of the 615k eligible shareholders, the bank received applications from around 155k shareholders for a value of $2.9 billion.

In the half-year ended 31 March 2020, NAB posted statutory net profit of $1,313 million and cash earnings of $1,436 million. Net interest margin for the period was 1.78%, down by 1 basis point largely due to lower interest rate. Credit impairment charges for the period were $1.16 billion, largely due to forward looking provisions to account for the COVID-19 led deterioration.

CET1 ratio of the bank improved by 1 basis points to 10.39% at the end of the period. Since half-year end, the bank has completed a $3 billion institutional placement, SPP will bring another $1.25 billion to its capital position.

1H20 results were largely deteriorated on the back of AUSTRAC provision, notable items and impairment charges arising out of COVID-19 situation. Its customer deposits were up $19 billion, which was substantially higher than $5 billion loan growth.

At the end of period, its provisions for expected credit losses increased to $5.8 billion after a significant increase to account for COVID-19 potential losses, which required around $1.6 billion in additional credit impairment provisions.

Due to AUSTRAC matter, the bank had to make provision for the expected penalty, and it provisioned $900 million for the matter. The bank’s net interest margin for the period was 2.13%, and CET 1 ratio was 10.8%.

Management figured to defer the interim dividend, but they will continue to review the dividend status for the rest of the financial year. More importantly, the Group is conducting strategic review for a number of its businesses, which have designated under Specialist Businesses.

For the half year ended 31 March 2020, ANZ recorded statutory profit of $1.55 billion, down by 51% over the pcp. A large fall in profit was primarily due to credit impairment charges, which included a large sum related to potential COVID-19 driven losses. 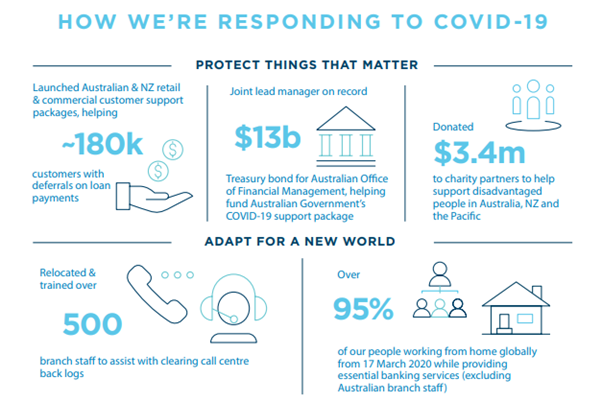 At the end of the period, the CET1 ratio of the bank was 10.8%, but return on equity decreased to 4.7%. Board of the bank decided to defer the interim dividend until there is more visibility on the economic impact of COVID-19.

Shayne Elliott, ANZ CEO, stated that the bank entered the crisis from a position of strength. Over the past years, the bank has de-risked business through various divestments and exits, including Asia retail and commercial business, Esanda motor dealer finance, life insurance, superannuation and financial planning.

Earlier this month, the bank announced that it agreed to sell 55 percent interest in CFS (Colonial First State) to KKR. The sale was agreed at an implied valuation of $3.3 billion on a 100% basis. CBA is expected to receive $1.7 billion through the sale of its stake.

The divestment of the stake is in line with CBA’s vision to emphasise on its core offerings. Owners of the CFS intend to undertake significant investment to provide better outcomes for the business and its position in the market.

In the March quarter update, CBA noted that unaudited statutory profit for the period was $1.3 billion. It incurred additional provision of $1.5 billion to account for the potential impact of COVID-19.

For the period, its credit impairment expense was $1.6 billion. At the end of the period, its lending composition consisted of 69% in home lending, 13% in institutional lending, 16% in business lending and 2% in consumer finance.

CET1 Level 2 ratio was 10.7% at the end of the period, but the ratio was impacted due to dividend payment and customer remediation costs. CBA expects that CET1 level 2 ratio would be favourably benefitted by divestment of CFS, PT Commonwealth Life.