Commonwealth Bank reported the third quarter update for the period ended 31 March 2020. Its unaudited statutory net profit for period was $1.3 billion. CBA has provided with an additional credit provision $1.5 billion related to COVID-19.

(All comparisons are against the average of first two quarters)

Under the SME loan guarantee scheme, the bank has loaned out $555 million. For home loan customers, the fixed term owner occupied home loans interest was lowered to 2.29%. CBA has also provided range of other reliefs to customers, including merchant fee waiver, business lending rate, deposit rate.

Also, $6.4 billion was noted as its total provisions. CBA’s loan impairment expense for the quarter was $1.6 billion. The bank’s funding structure remains sound with deposit funding accounting for 70%. During the quarter, the deposits growth was attributed to retail/SME clients and transfers of corporate clients from funding facilities to deposits. 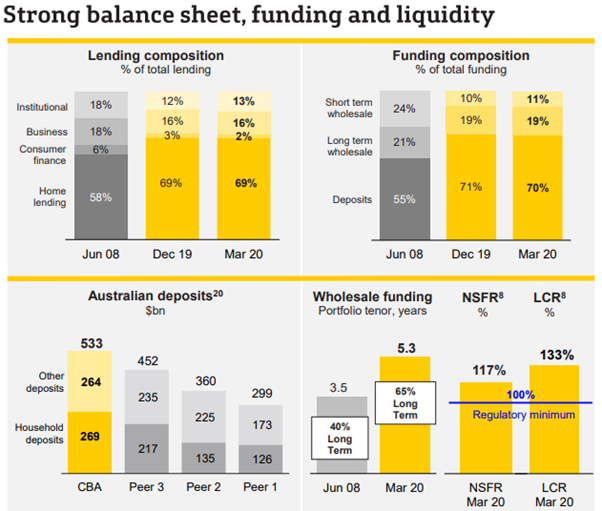 CBA has also announced the sale of 55% interest to a renowned private equity firm. It would receive cash consideration of around $1.7 billion, which is expected to improve the Level 2 CET1 ratio of the group by 30 to 40 basis points. The transaction is expected to complete in the first half of calendar year 2021.

The bank has received approval for the 80% divestment of its Indonesian life insurance business, which is expected to complete in June 2020. This transaction is would improve the Level 2 CET1 ratio by 7 basis points.

Earlier in May, Crown Resorts reported unaudited results for the period 1 July 2019 to 23 March 2020 – the day when the group ceased non-essential services and gaming at Melbourne and Perth sites.

The business has generated normalised EBITDA of approximately $500 million and normalised NPAT was around $210 million. It was noted that the Company will consider the limited revenue and cost during the shutdown period as significant items. Significant items would also include corporate costs, equity accounted results, and income tax related expense.

Items that would not be included in the significant items will include depreciation and amortisation, wagering and online gaming business. Late last month, the Company reported that The Blackstone Group Inc. acquired 9.99% stake at $8.15 per share.

CWN has stood down 95% of its employees and only employees engaged in critical positions are working with the group. However, the Company provided support to its employees through ex-gratia payments of two weeks, excluding senior management.

The resort and gaming giant also applied to the JobKeeper Scheme of the Government and expected operating cash costs would be in the range of $20 million to $30 million every month.

In April, CWN also paid interim dividend. The Company also secured additional liquidity through new bilateral facilities of $560 million with its financiers. While another $450 million project finance facility was in pipeline from the financiers for the hassle free construction of Crown Sydney.

In mid-April, the Company had cash balance of $500 million and was able to secure further $1 billion in debt facilities from the bankers. Despite COVID-19, Crown would complete the Crown Sydney project, which is expected to complete by end of the year. In Perth & Melbourne, the Company also provided rooms for self-isolation for those who returned from overseas.

In April, the Company provided COVID-19 and trading update. It was said that business entered the ongoing crisis period with a position of strength, enabling the business to cushion the immediate blow. 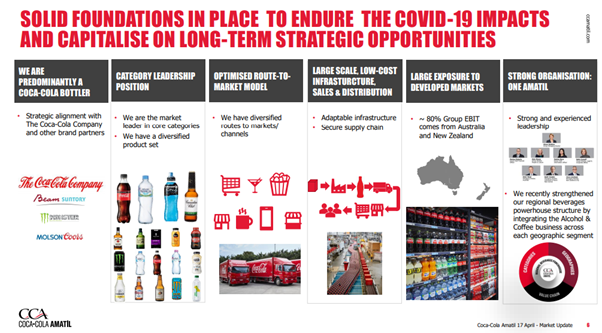 Business of the Company is well supported by strong fundamentals, including alignment with The Coca Cola Company, presence in developed markets, resilient balance sheet and liquidity.

At the end of March 2020, the debt facilities had average maturity of 5.4 years with debt around $1.8 billion. CCL had $920 million of cash at bank deposits.

In early April, the Group completed issuance of $200 million 10-year bonds in the European markets. The proceeds were deposited to the bank deposits. CCL has sufficient liquidity to repay the upcoming debt maturities of $305 million in 2020.

The Company has continued to manufacture, distribute, and save jobs during the pandemic, but demand in the channel mix has changed, inducing CCL to shift workforce in areas with high demand.

Its cost management initiatives are expected to deliver savings of over $140 million 2020 and capital expenditure plans are now around $200, marking a reduction of $100 million as non-essential capex is deferred.

In the first quarter 2020, the Company recorded a low single digit revenue and volume growth. Its EBIT was also lower compared to the pcp due to bushfire, margin erosion, and marketing expenditure.

Due to social distancing measures, the trading in the initial weeks of April was week with falling volumes. In Australia, the EBIT of the business has been impacted by changes in channel mix.

In NZ & Fiji, the revenues grew by low single digits compared to the pcp, and EBIT growth was in low teen percentages. In the starting weeks of April, the trading volumes were impacted.

In Indonesia & Papua New Guinea, the business achieved volume growth of mid-single digit percentage compared to the pcp. During the initial week of April, the volumes in the region were severely impacted.

Tags:
Swinging back to value