Which ASX Stocks Continue To Be The Market Darlings – APT, SBM

In this article, we would discuss two stocks from the ASX universe. These stocks are increasingly catching investor traction. Among the stocks, APT is a technology-based payment solutions provider, and the company is progressively improving its footprint in the US and strengthening its capabilities with valuable additions.

Technology-driven payment company, Afterpay Touch is promoting retail innovation through its leading solutions offered to retailers and customers. It is pioneering the growing trend in the buy now, pay later segment.

Recently, the company successfully appointed a sophisticated group of professionals for its US Advisory Board. The Board was incorporated to provide insights into the key business opportunities and partnerships in the American consumer market.

It is said that American consumers are increasingly preferring alternate solutions for payments to avoid revolving & extended debt. The company’s solutions allow the merchant to offer instalment payment services without interest. It has disrupted the existing consumer interest & fees model with its merchant fees model. 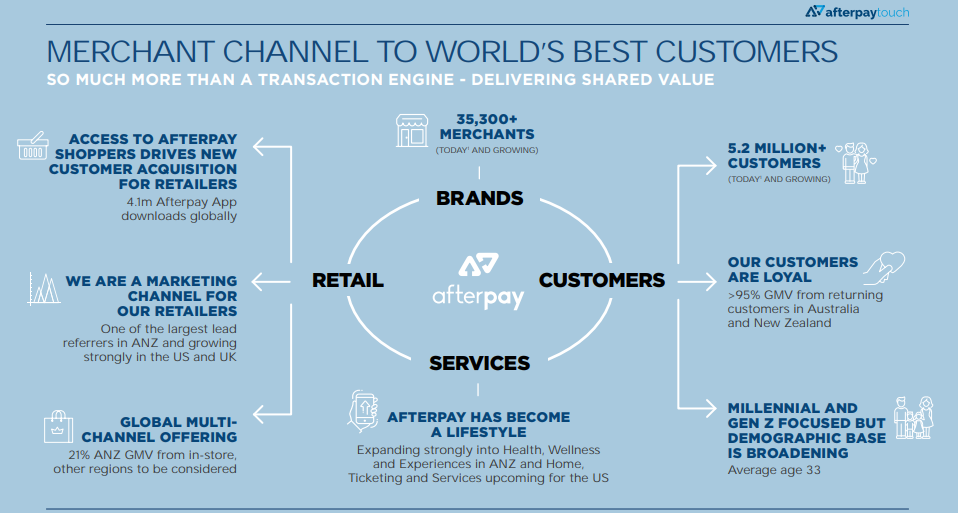 It was noted that the company has effectively scaled its business in the United States, following the entry in the country over a year ago. Over 6.5k retailers were offering Afterpay services, equating to over 10% of the US fashion & beauty market.

Lawrence H. Summers – Mr Summers is a globally renowned economist, and is currently serving as Professor, President Emeritus of Harvard University, among other roles. Previously, he has served as the Secretary of the U.S. Treasury in President Bill Clinton’s reign. He also held a senior position during the President Barack Obama tenure and served as the Chief Economist at the World Bank.

Mr Matthew A. Kaness – Mr Kaness was the President & CEO of ModCloth Inc. Under his leadership, the fashion retailer had delivered record sales while transforming the company to a vertical, multi-channel direct-to-consumer brand. Presently, he is the Interim Chairman & CEO of Lucky Brand Dungarees, Inc. Besides, he is a well-known industry veteran in the consumer and e-commerce segment.

Mr Uli Becker – Mr Becker is the marketing & sales industry veteran. Presently, he is engaged in consulting, advising, supporting, and investing in the start-up ecosystem. He is also actively advising HYPE Sports Innovation and sits on several Boards as a director or advisor. He has held senior roles at Adidas and Reebok.

The company has also reported on the departure of Mr David Hancock, who was serving as a Director. He was serving as an Independent Non-Executive Director since March 2017, and he joined the Board, following the merger of Afterpay and Touchcorp. He would continue in a role with the company, working as a consultant.

Reportedly, APT has provided the confidential interim report of an external auditor to the AUSTRAC. Meanwhile, Mr Neil Jeans, the external auditor, has advised the company that the work has commenced related to the testing, assessment, implementation, and compliance with the several AML/CTF Programs.

Recently, Norwegian Central Bank – Norges Bank had acquired a 5.01% stake in the company, according to an exchange filing. Apart from being a Central Bank, Norges Bank is one of the world’s largest pension asset managers, and it acts with discretionary powers on behalf of the Government of Norway.

In an exchange release on 7 October 2019, Alice Queen Limited (ASX: AQX) had reported an update related to the Horn Island project under a recently formed joint venture with St Barbara Limited. Accordingly, the JV partner had completed a soil and rock chip geochemical sampling program.

Further, the collected quartz vein rock chip samples included 407 soil & 174 quartz vein samples, and the assay results are anticipated next month. The sampling had revealed an extensive area of quartz-sulphide and quartz only veins hosted with a sericite-chlorite alteration. In addition, it was said that a ground dipole-dipole induced polarisation survey would be started over the zone of extensive quartz veining.

Reportedly, the company had produced 87,569 ounces of gold for the September 2019 quarter in consolidated terms, increasing on sequential terms. The total production included 38,153 ounces of gold from Gwalia with 164kt of ore milled at an average grade of 7.4 g/t Au.

The company was able to achieve such a result from Gwalia amid the ongoing work of Gwalia Extension Project, which is nearing completion. It is essential to complete the project, as it would increase tonnage produce at lower grades to be consistent with the planned ounce production profile.

In July 2019, the company had acquired Atlantic Gold, and the first quarter production from Atlantic was 22,355 ounces at an average milled grade of 1.29 g/t Au. The company had previously notified that the production was impacted due to power outages due to a hurricane and maintenance of detox tanks. 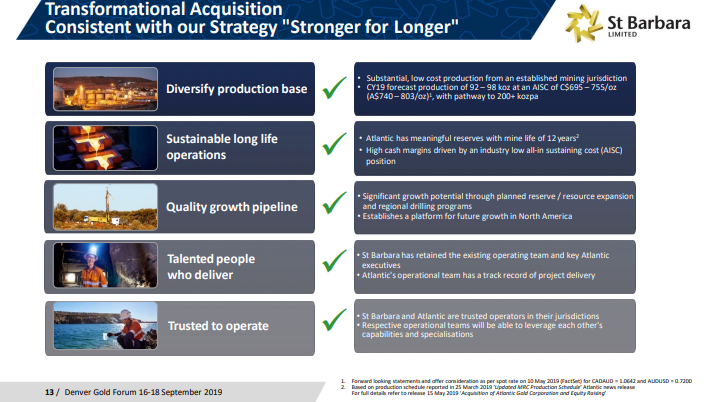 Further, the company would be providing additional detail in the quarterly report scheduled to be released in late October 2019. The report would involve details on the integration of the acquisition, cost of production, cash flow updates, and FY20 guidance.