A look At Some Gold Stocks – SBM, NCM, GOR, KLA

Gold price have seen a phenomenal upward movement in the past, despite the economic downturns due to recession-like scenario or financial crises in economies. Hence, investors can safeguard their portfolio against unforeseen shocks by including gold in their portfolios. Gold price has been volatile in the short term but has retained its value over a long period of time. Investing in gold enables the investors to hedge against inflation, as gold prices often move opposite to the dollar. Since gold often moves opposite to the stock markets, investors can diversify their portfolio by adding gold to balance their portfolio in times when the market goes down.

Financial Highlights: In FY19, the company reported production of 362k oz at an All-in Sustaining Cost of A$1,080 per ounce. The period was characterised by record production and cash flow from Simberi operations and continued successful deep drilling and exploration at Gwalia. During the year, the company reported a net profit after tax amounting to A$144.16 million, as compared to A$226.99 million in prior corresponding period. 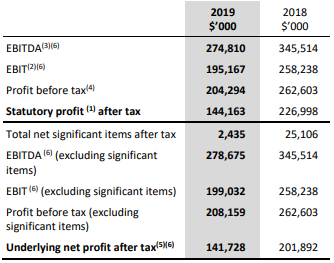 Leonora Operations: Total sales revenue for Leonora operations stood at $392.68 million, as compared to prior corresponding period (pcp) revenue of $461.26 million. Gold sales were reported at 222,625 ounces, in comparison to sales of 271,141 ounces in pcp. During the year, gold production from Gwalia mine was lower than previous year due to lower ore tonnes mined and lower grade.

Simberi operations: Strong performance was reported across the operations, with the company setting a new record of production and cash. Total sales revenue from the operations amounted to $257.64 million, as compared to $217.94 million in prior corresponding period. Gold sales for the year stood at 145,819 ounces, as compared to 129,815 ounces in FY18.

Newcrest Mining Limited (ASX: NCM) is engaged in exploration, mine development and sale of gold.

FY19 Highlights: In FY19, the company reported gold production of 2.49 million ounces, at the lowest reported annual All-in Sustaining Cost of $738 per ounce. Copper production during the year stood at 106 kt, up 36% on prior corresponding period production of 78 kt. Free Cash Flow for the year witnesses a rise of 34% at $804 million with all operations being free cash flow positive. Net debt for the year was reported at $395 million, down 62% from the net debt as at 30 June 2018. 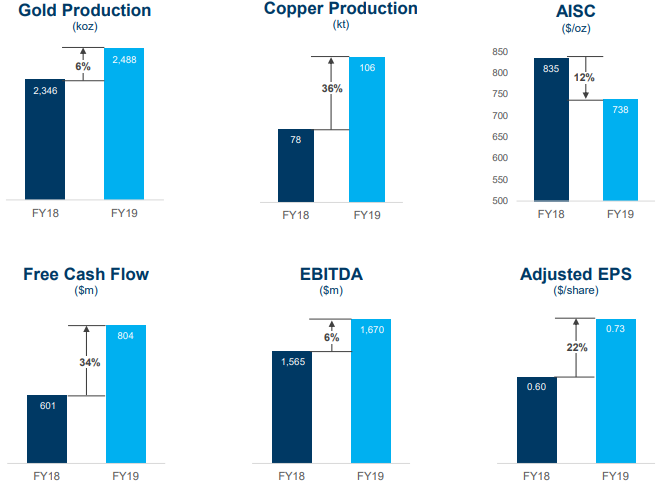 Strong Financial position: During the year, the companyâs net debt to EBITDA reduced to 0.2x, from 0.7x in the previous year, indicating that the companyâs operations are generating enough revenue to earn profits. Gearing ratio of the company reduced to 4.9% in FY19, from 12.2% in the prior corresponding year. The companyâs dividends have shown an upward trend over the period covering FY16 to FY19, with dividends for both the years amounting to US$0.075/share and US$0.22/share, respectively.

Gold Road Resources Limited (ASX: GOR) is engaged in mineral exploration and development of the Gruyere Project in Western Australia. 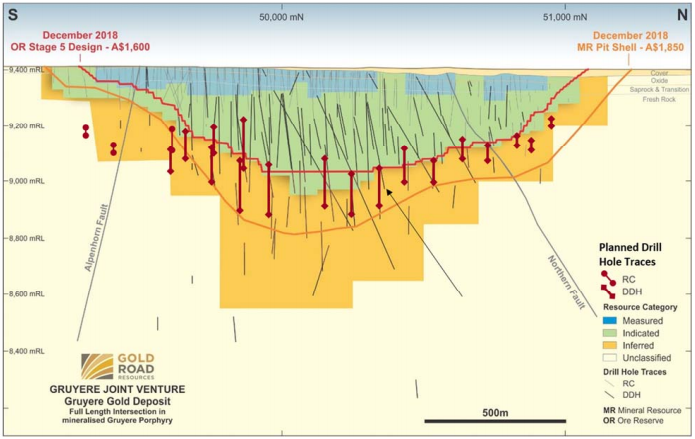 Shareholding: The company recently updated that Bank of America Corporation became a substantial shareholder with 5.86% of the voting power.

Kirkland Lake Gold Ltd (ASX: KLA) is a gold mining company operates in development and exploration of gold across Canada and Australia. The business operates in two projects namely the Fosterville Mine in the state of Victoria, Australia and the Macassa Mine in Northern Ontario.

Operations Highlights: As per the recent company update, KLA posted operational updates from underground exploration at Macassa Mine, Ontario. The highlights are summarised as follows. 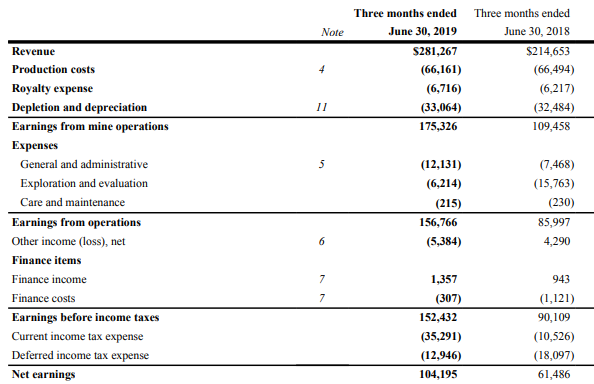 CLICK HERE FOR YOUR FREE REPORT!
Tags:
Newcrest Mining Limited’s (ASX: NCM) Gold Road Resources Limited (ASX: GOR) St Barbara Limited (ASX: SBM) ASX: KLA
All pictures are copyright to their respective owner(s).Kalkinemedia.com does not claim ownership of any of the pictures displayed on this website unless stated otherwise. Some of the images used on this website are taken from the web and are believed to be in public domain. We have used reasonable efforts to accredit the source (public domain/CC0 status) to where it was found and indicated it below the image.