The benchmark index S&P/ASX 200 was trading at 6,690.9 points on 6th November 2019 (AEST 12:39 PM), down 0.09%. In the below article, we are discussing three stocks, one from communication services sector and the other two from metals & mining sector. Let us have a look at the recent developments of these ASX listed stocks.

SDA, listed on the Australian Securities Exchange in 2014, is involved into the provisioning of remote communications. The company also caters to its global clients with IT services.

At the end of 2019, the company would continue to target Leverage Ratio to be below 4.0x.

At the end of October 2019, PLS released operational and financial performance for the September 2019 quarter, wherein the key personnel of the company stated that June and the entire September 2019 quarter proved as challenging for Pilbara Minerals as well as for the global lithium raw materials sector. However, PLS responded towards these short-term market challenges quickly and decisively.

According to the company, production during the three months to September was moderated, owing to soft market conditions and the slower-than-expected ramp-up of China-based facilities by the offtake partners of PLS.

There were two major highlights during the quarter. The first one was the signing of binding terms (Joint Venture) with POSCO in pursuant to the construction and design of a downstream chemical conversion facility in South Korea and the second one was the introduction of CATL as a strategic investor in the company.

PLS announced an equity raising of $111.5 million, which comprised:

Cash balance at the end of the quarter was $60.9 million.

At the Annual General Meeting of the company, Chairman Tony Kiernan addressed the shareholders and stated that proceeds from equity raising and associated share purchase plan, if fully concluded, would raise a total of ~ $110 million, enabling PLS to progress its long-term growth as well as diversification strategy.

Galaxy Resources Limited (ASX: GXY) is engaged in the production of lithium concentrate as well as exploration for minerals in Canada, Argentina and Australia. The company recently announced that John Turner, one of its directors, acquired 50,000 ordinary shares on 28th October 2019 at a consideration of $42,142, which led to a change in his holdings in GXY.

The company, through a release dated 24th October 2019, updated the market with its activities during the quarter ended 30 September 2019. 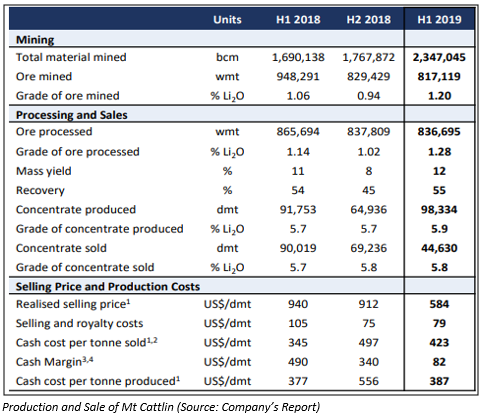