Viva Leisure- A star in the Health Leisure Industry?

The increasing awareness of people towards the health benefits from the physical activities and high obesity levels have triggered the growth in the health leisure industry. In Australia, the health & fitness industry is a good business and is gaining momentum. Health and fitness industry mainly consists of fitness centres, health clubs and gymnasiums. It is expected that health leisure industry to continue robust growth for more than five years. In Australia, the enlargement of budget gym chains and functional fitness with the increasing consciousness towards the health advantages of physical activities and evolution in health awareness are the key contributors for the growth. Hence, the health leisure industry was expected to grow and generated revenue of approximately $2.5 billion in 2018-2019.

According to a recently released media report Gyms and Fitness Centres in Australia, the health and fitness industry in Australia has expanded firmly over the past five years while undergoing significant structural transformation.

As per the report from IBISWorld which is an international market research company the revenue for the fitness industry would grow at an annualised rate of 1.8% to reach $2.4 billion over the half-decade through to 2022/2023 which was $2.2 billion for 2017/18.

An ASX listed company Viva Leisure Limited (ASX:VVA) which operates in health and leisure industry was founded in 2004 with the goal to connect health & fitness and to provide an affordable, accessible facilities to its members. The company operates more than 40 health clubs within NSW, Victoria and the ACT and gives various different membership possibilities and a variety of facilities like big-box fitness, boutique fitness and others. 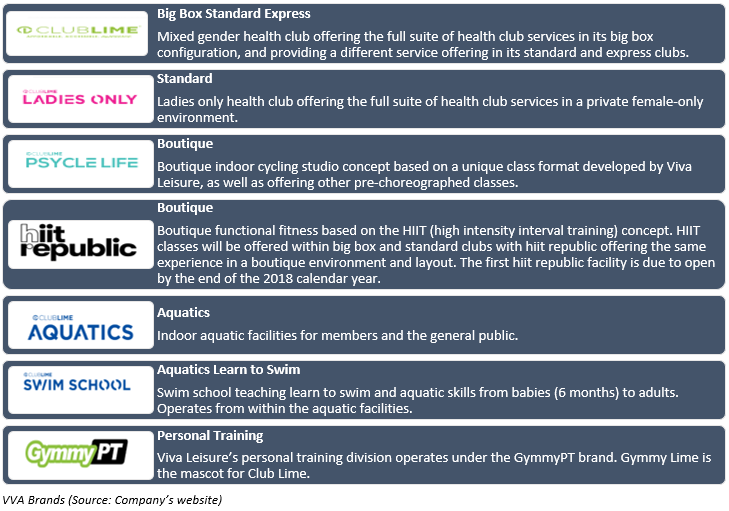 On 3 December 2019 Viva Leisure announced that the company has completed the Institutional placement and raised $20.0 million. This placement is for nearly 7.5 million ordinary shares which would be issued using Viva Leisureâs 15% placement capacity pursuant to ASX Listing Rule 7.1. It was fully supported by the companyâs existing shareholders and various new institutional investors.

On 2 December 2019, the company released its investorâs presentation on ASX highlighting the transaction and business overview, including the financial metrics.

Quick highlights from investors presentation are-

On 2 December 2019, Viva Leisure announced that it had signed a sale agreement for acquiring 13 FitnFast Health Clubs for $13.5 million. The company is acquiring a total of 13 out of the 17 operating locations of FitnFast Health Clubs. The combined membership for the newly acquired locations of more than 21,500 members at an average revenue per member of approximately $14.80 per week.

It is expected that the combined group would have achieved revenue of more than $50 million and an EBITDA of over $10 million on an FY2019 audited basis. After this acquisition, nearly 200 employees would join the Viva Leisure team, and hence the combined group will have more than 800 employees which also includes recently announced Healthworks acquisitions in Queensland.

Viva Leisure announced that it had acquired two Healthworks Fitness Centres in Cleveland and Victoria Point, Queensland. The company is operating in 45 locations at present and five more locations to open in December 2019, with 10 acquired Queensland locations. This would result in total of 60 operating locations at the half year 2020, in addition to this further 12 locations are in the pipeline. These additions would represent a 50% increase in the total number of clubs operating since 30 June 2019 which is corresponding to a new location opening on average every 1.3 weeks.

The forecast for revenue for the fiscal year 2020 has been revised, which include the expected contribution of the Healthworks acquisition, the FnF Acquisition, new club openings and overperformance of the existing portfolio. Revenue target is $58.7 million for 30 June 2020, and the annualised run rate for revenue is now estimated to be approximately $85 million.

The forecast EBITDA for the fiscal year 2020 has also been revised which include the contribution of new openings and acquisitions and EBITDA target is now $14.2 million with an annualised run rate to be nearly $21 million.

Can you expect more in your pay packet? | Inflation woes | Trending News Australia