If you are one of the equity investors irrespective of which part of globe you reside, it is highly likely that the news about the outbreak of coronavirus would have sent you palpitating to check the performance of the stock market. The onset of Wuhan coronavirus ever since its first case acknowledged in China has been received as a significant world phenomenon impacting most of the world markets.

The quarantine measures and the various bans on Chinese imports acknowledged the shares tumbling down with the beginning of the year 2020. The uncertainty soared high, and the investors shied away from risky assets amidst the looming chaos created in the stock market.

When gauging the stock market amid the coronavirus turmoil, the investor is most likely to move towards the safer securities promising safer returns. At such time, the inclination towards the gold is inevitable. The price of the spot gold flew high as that of the equity stumbled in the past one month.

China, as one of the economic leaders, has further exposed the entire world to the risk of financial stumbling. Comparing its position when SARS occurred, one can witness its current extensively intensified role in shaping the trade and economy of the world.

China is the principal trade partner of the US accounted for around $33.7 billion of imports in December 2019, higher than any other country. With the addition of the export issues adding to the already existing trade war, US trade with China appeared to be highly inflected.

China, alongside WHO has planned several measures that could assist in curtailing the spread of coronavirus. China, in support with WHO has been involved in understanding the virus and limiting the transmission of the diseases. The preventive measures encompass Travel restrictions as one of its critical components. China has curtailed travelling in groups. The outbound movement of traffic from Wuhan is closed to avoid the intensification of the disease.

The Chinese government has taken up several other measures to limit the outbreak. The closing of the traffic movement from Wuhan is accompanied by ensuring the necessary supplies to prevent food scarcity issues.

The Chinese healthcare sector has responded vehemently to the epidemic, as the government has pooled trained medical professionals across different countries. The speedy construction of the new hospitals further is expected to add the capacity to manage and give proper care to the patients.

In the event of the Chinese New Year, China has extended the holidays that would avoid the contact and could reduce the transmission of the disease.

In response to the stumbling economy due to the epidemic, China appears to be forgoing the trade war by halving the extra tariffs. The move on the tariff from China can also be seen as the counteraction to the US decision that suggested the reduction on the Chinese Goods. The response taken by China to enhance the scenario in the face of the initial shock and travel shutdown comes as positive news for the US market.

US stocks witnessed a continuous growth for four straight sessions on 6th February, implying the return of the positive sentiments amidst the investors. The constant rise in the US stocks may be the reflection of the tariff-cut undertaken by China. 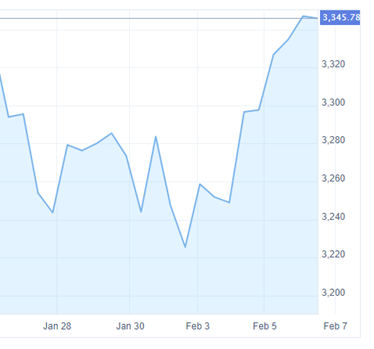 The optimism in the US stock market was further bolstered by the data released regarding the number of Americans filing for employment dropped in the week ending 1 February. Comparing against the claims made in the week ending 25 February, the last week’s unemployment claim has seen the significant drop of 15,000.

Becton Dickinson and Company witnessed the falling in the stocks from $274.72 on 1 February to 2 February 252.97 resulting in the total downfall by 7.9 per cent. The dwindle reportedly comes after the medical technology company downsized its profit and revenue projections for the full year.

In February, Kellogg’s acknowledged the downfall in its shares from $68.86 on 3 February to 63.48, as on 6 February. The drop in the price can be attributed to the missing of the market expectations by the company.

The reporting of the quarterly revenue by Twitter, on 6 February came down as a piece of positive news for the company has it has contributed to a positive outlook among the investors. Twitter prices took by 14.79 per cent as the price escalated by $4.95 from 5th to 6th February.

Outlook in response the Growing Market amidst the pandemic disease

Considering the present scenario concerning coronavirus, the strengthening of the market indices for the US sends a positive signal to the companies. While the stabilising of the global economy would be the harbinger for the positive trends in the stock market, nothing concrete could be said based on such short performance.

Although the technology and services continue showing positive momentum, the energy stocks are still staggering because of the novel Coronavirus. The health emergency in China continues to plague the people in the absence of any specific cure to the disease. The eerie condition yet prevails over mainland China which could act as a black hole for many companies if the coronavirus continues rolling out in the same accelerated pace.