Uber Technologies Inc (NYSE: UBER) on 4 November 2019, notified the market with the financial report for the period closed 30 September this year. Uber mentioned that during the period, rides adjusted EBITDA moved up by 52 percent against the pcp. Also, adjusted net revenue improved to 33 percent year-on-year basis. The active platform customers, on a monthly basis grew by 26 percent, trips by 31 percent and gross bookings by 29 percent from the previous corresponding period or pcp. 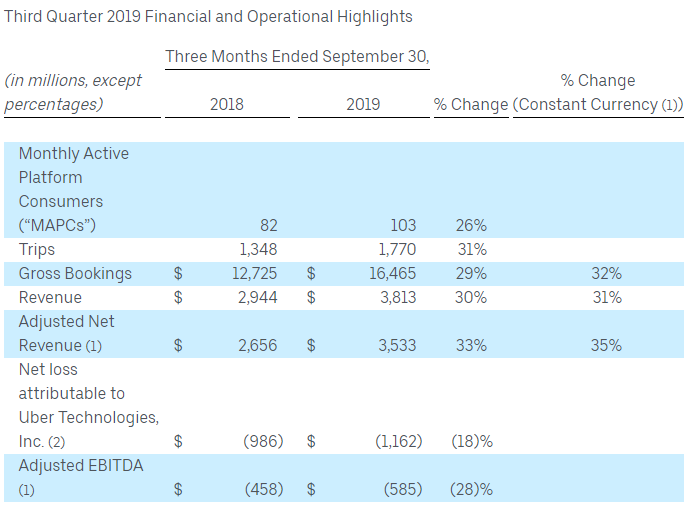 However, it has been a tough year for Uber. In May, they experienced what will go down in history as one of the most underwhelming IPOs of the modern times. On itâs very first day of trading, itâs initial share price of USD45 dropped by 6.7%.

The stock further plummeted in August after the company posted a whopping $5.24 billion loss for its 2nd quarter, and continued to slip downwards all year, then nosedived again at the start of November after reporting a 3rd quarter loss above $1 billion.

Of late, the London Transport Authority has not renewed Uberâs license to operate within the city, potentially signalling the loss of one of the ride-sharing firmâs largest markets. Uber will have 21 days from Mondayâs (25 November 2019) announcement to continue operating while it appeals the decision, but one assumes that they would have to make serious changes to their safety and security features in order to satisfy the regulatory body. This loss of licence has come after a 15-month grace period following a ban in 2017, in which serious safety concerns were identified as necessary for Uberâs operations to continue. If they have been unable to satisfy the London body in the 15 monthsâ time, it is hard to imagine that things would turn around for them by Christmas.

The problems raised are to do with safety concerns for passengers travelling with uninsured drivers who have been able to use drivers accounts to which they are not registered. However, concerns with Uber are far broader than its insurance woes. If you visit the Wikipedia page for Uber, about three quarters of the entry is devoted to criticisms of the company, featuring every scandal imaginable, from exploitation of labour to offshore tax evasion.

In Australia, there have been significant safety concerns raised following a number of high-profile sexual harassment and assault cases brought against unlicensed drivers.

Government and regulatory bodies are starting to sit up and take notice. This is no fringe issue â 4.7 million Australians use the ride-hail app on a regular basis. If changes arenât made soon, we will likely see similar action in Australia to that of Londonâs Transport Authority.

Uber stock is certainly looking very affordable now, but it is too early to say whether it will be worth the risk. On Monday, the day of the announcement, Uberâs share price fell 6%. If the ban is upheld, it is hard to predict how great the loss might be. About 3.5 million people use the transport service in London, which Uber says is one of just five metro areas that generate 24% of its ride-hail bookings.

During the companyâs IPO listing, Uber had stated that regulatory hurdles in any of the crucial metropolitan regions would have an adverse impact on its business, finances, and operating related outcomes to a bigger level than would the occurrence of such events in other regions.

On 26 November Uber stock last traded at NYSE at USD29.53, moving up by 1.44 percent from its previous close. The company has a market capitalisation of USD50.37 billion.