An American multinational transportation network company, Uber Technologies Inc. reported a loss of $1.01 billion for the March quarter 2019 in the first post-IPO earnings report. However, the company’s revenue improved 20 per cent to $3.1 billion relative to the same quarter last year.

This is the lowest quarterly growth of the ride share giant since 2017. The loss of the company increased more than 100% in the first quarter ($1,034 million) from the year before ($478 million) on an operating basis.

Based in San Francisco, Uber has been engaged in providing services like peer-to-peer ridesharing, food delivery, ride service hailing and a bicycle-sharing system. The company was founded in March 2009 as UberCab, and currently, it has operations in over 785 metropolitan areas worldwide.

The first-quarter sales declared in Uber’s first financial report as a public company was near the high end of its previously disclosed preliminary results. The monthly active users rose to 93 million in the March quarter from 70 million in the prior corresponding period. 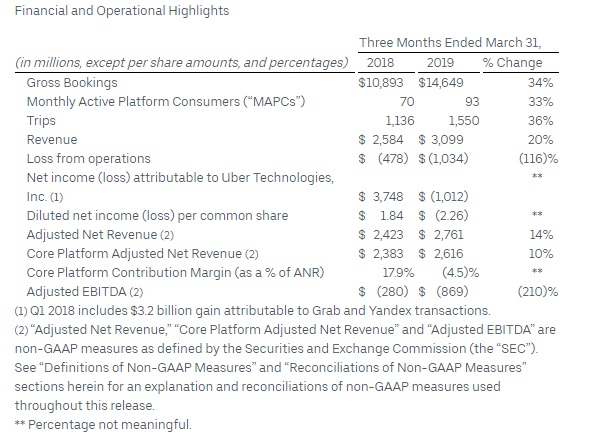 Uber’s rival Lyft also reported a quarterly loss exceeding $1 billion recently, after it went public in March in a blaze of hype. Lyft declared a loss of $1.14 billion in the March quarter 2019 relative to a loss of $234.3 million in prior corresponding period. Lyft’s loss was driven by the huge charge of $894 million for its stock-based compensation.

One reason due to which Uber struggled to reach profitability was its large expenditure on rider promotions and driver incentives to gain market share.

2019 was supposed to be a glorious year for the company as it went public, but it ended on a sour note as investors raised questions on whether the deeply unprofitable company could ever make money. Uber traded below its IPO price in the three weeks since its initial public offering on the NYSE. Both Uber and Lyft witnessed short selling from investors, doubtful of company’s sustainability.

Uber's food delivery business - Uber Eats - raked in $536 million in revenue in comparison to $283 million last year, but some analysts have pointed to the growth sustaining ability of Uber Eats in view of heavy competition. They are concerned about whether the company’s price wars would shift from ride-hailing to food delivery.

The Chief Financial Officer of Uber, Mr Nelson Chai, indicated that 2019 would be an “investment year” and the company will cut back on customer promotions. He specified that marketing expenses (As % of revenue) should decline in the second quarter.