In Australia, the headwinds of adverse weather conditions have been prevalent for a while now, as the country is suffering from drought like conditions, posing a risk to insurance sector. Meanwhile, the record low interest rates are making the insurance players fetch lower returns on safe investments or fixed income investments.

Further, there could be more risks to insurance players exposed to the rage of California wildfires that have businesses in California, USA. In addition, the Hurricane Dorian has hurt Bahamas, North Carolina, Canada, and insurers are expecting economic damage to the tune of USD 1.5 billion in the US and Canada.

WBC also reported lower insurance income due to the impact of Protecting Your Super legislation along with higher claims.

Medibank Private Limited (ASX: MPL) has recently updated on the outlook for FY 2020. The company said it is experiencing higher than expected claims, resulting in a $21 million under provision from the claims reserve on 30 June 2019.

Medibank now expects an increase in claims per policy in the second half of FY 2019 and throughout FY 2020. It was said that higher claims have been driven by various factors, including higher private hospital payments, and elevated prosthesis costs.

More importantly, the company has voiced out opinion for a government reform to help health insurance companies to maintain affordability amid increasing costs within the healthcare system.

Recently, nib Holdings Limited (ASX: NHF) has reaffirmed its FY2020 guidance - underlying operating profit of ~$200 mn with a statutory net profit of ~ $180 mn. It is expected that the arhiâs net margin to be approx. 6% this financial year.

Considering this, let us look at three Resilient Insurance Businesses

In October, the company convened 2019 Annual General Meeting. Ms Elizabeth Bryan AM, Chairman of the company, stated that Board had welcomed six ethical suggestions by Commissioner Hayne through Royal Commission.

The company has been carbon neutral since 2012, and in 2019, it reduced greenhouse gas emissions by 22.6%, surpassing the target to lower carbon emissions by 20% by 2020. In addition, the company has made changes to its investment principles to support climate change objectives.

Mr Peter Harmer, Managing Director and CEO of the company touched on the performance of the company in FY 2019. The company posted just over $12 billion in gross written premiums with a net profit after tax of just over a billion dollar.

In FY 2020, the company is expecting a low single digit growth in gross written premium, and anticipating a reported margin in the range of 16 per cent to 18 per cent. The net profit after tax is expected to include a profit of approx. $300 million, following the exit from Indian joint venture.

In October, the company has also agreed to sell its 26% interest in its SBI JB- SBI General Insurance Company . The transaction has reached an agreement with Napean Opportunities LLP and an affiliate of Warburg Pincus LLC.

In addition, the total consideration for the transactions was reported to be over $640 million, considering the exchange rates of October. It was said that the transaction would increase the regulatory capital position of company by over $400 million and net profit after tax by approx. $300 million.

In 1 HY 2019, the group reported NPAT of $463 million, representing an increase of 29 % on previous corresponding period (pcp). The investment portfolio of the insurer delivered an annualised return of 6.8% during the period, up from 2.1% on pcp. 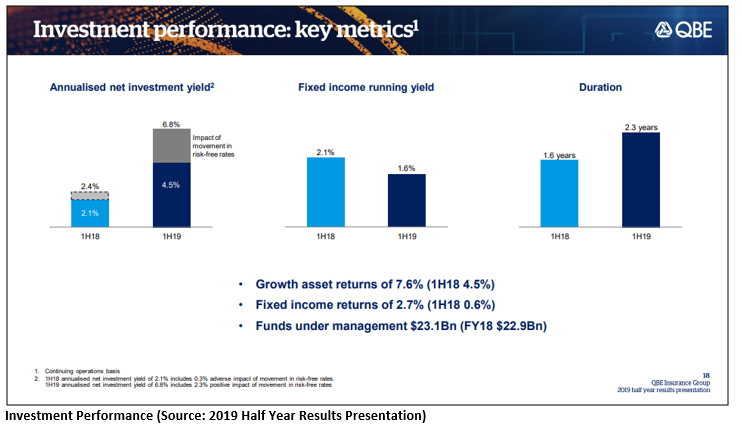 In continuing operations, the group reported a statutory NPAT of $479 million compared to $370 million in pcp, while discontinued operations reported a loss of $16 million.

The statutory cash profit after tax for the period was $520 million (Excluding amortisation of intangibles and other non?cash items), up by 35% from $385 million in the previous corresponding period (pcp)

Besides, the insurer undertook share buybacks worth $174 million in the half-year period, and it is continuing with the buyback program.

QBE has stated to emphasise on:

In the full-year results for the period ended 30 June 2019, the group has posted net profit after tax of $175 million and cash earnings of $1.115 billion. The results were adversely impacted by the after tax non-cash loss on the Australian Life insurance business sale.

In FY 2019, the groupâs largest division, Insurance Australia, delivered a profit after tax of $588 million, although this result was impacted by Townsville floods & Sydney hailstorm. It was mentioned that the severity and frequency of natural hazards events have increased over the past decade, resulting in access allowances for events.

The group had announced a return of capital at 39 cents per share, paid in October this year, from the remaining surplus from the proceeds of life business sale. In October, the group also completed the sale of Capital S.M.A.R.T and ACM Parts business for $420 million, providing it with additional headroom. In addition, the group completed a reverse stock split at 0.971 for 1, meaning 971 shares to holders who had 1000 shares.