The struggle over Facebook digital currency and wallet has sight a ray of hope post The Australian Prudential Regulation Authority (APRA) submitted the scheme related to digital wallet. APRA one of the country's top regulator overseeing the payment system submitted the proposal on Financial (FinTech) and Regulatory Technology (RegTech) to the Senate Select Committee on 21st January 2020.

The recommended RegTech framework is encompassing issues ranging from digital wallets to data protection. In the same APRA's role within the structure is to administer the digital wallets payments and that store substantial value or amount of fund for enough time. The best example is proposed Facebook’s Calibra - a digital platform or wallet for Libra cryptocurrency, i.e. stable coin is a digital asset comprising financial infrastructure for a global currency, operated by a new version of blockchain developed by Facebook.

The APRA movement toward digital framework is the testimony to the mounting popularity in the era of a digital wallet for online purchase and mobile banking. The proposed regime poses more scrutiny to the digital wallet, which hold a significant amount of value in pre-paid basis on behalf of the customers.

One question may arise that why Calibra is confronting conundrum if other digital wallets like Apple Pay sailing smooth?

This is because Apple Pay holds user credit or debit card information and not store any value; it facilitates payments from a selected account where the banks still hold the fund as deposits. Whereas, in Calibra, the new currency Libra can be bought by the user, and the amount can be stored at the Calibra valued against a basket of global currencies.

How will the Current Framework be different from the Proposed new framework?

To be accredited as PPF by APRA, it must hold value above a threshold amount of $10 million, and the service must be widely available example PayPal of Australia.

Whereas, the new regime is intended to be intelligent to adapt upcoming developments and technological enhancements apart from the current system to encompass global stable coin ecosystem, which has recently drawn considerable attention. Presently, along with existing three regulators, Council of Financial Regulators (CFR) and the Treasury are evaluating this new regime to increase competition, ease the complexity, nurture innovation to improve customer experience.

The role of regulators in the digital wallet is shown below: - 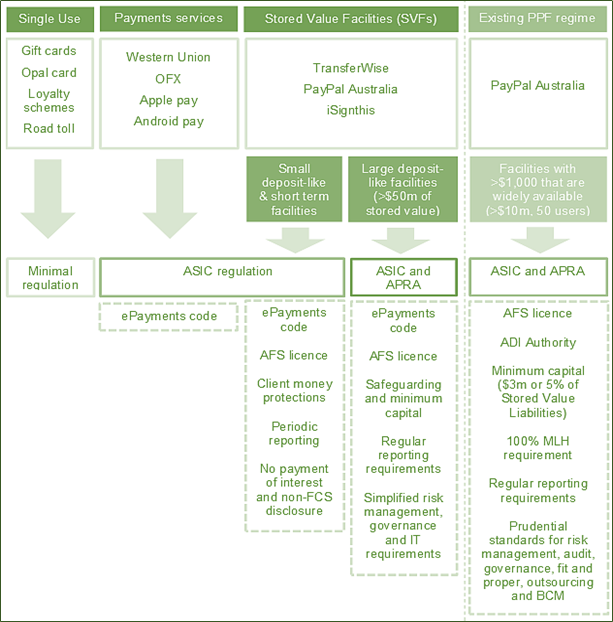 The stored value facility involving large deposit greater than $50 million will be under purview both ASIC and APRA where the value for Calibra as well as a minimum capital requirement under new regime has not been decided yet. For comparison, the only present PayPal under PPF regime must hold minimum capital, i.e. $3 million or 5% of the stored value liability.

Where is the heat coming from for the Fintech Players? – Click to Read

Is Libra matter of concern or why it is under the purview of scrutiny? To assess the same, let us lens through the past happening.

Facebook announced last year June the plan to roll out the cryptocurrency by 2020 revolutionizing the existing banking system. The plan is to connect global users to make a financial transaction using the digital platform, i.e. Calibra and Libra being the currency of trade, later convertible by the user in their respective country's currency. With the potential to cut the global financial exclusion by the Facebook presence in the developing countries leading to cut expensive cross-border transaction and thus saving time and money for both businesses and household.

Please click to know more about Bitcoin: A Year ASX Journey and 2020 Outlook

However, the concept of private entity launching its currency and storing the value or fund in its digital currency rather than bank raised concern to the regulatory bodies and central banks. The hurdle exerted on the Libra for the potential threat of money laundering vehicle, risk of global financial stability, misuse of private user data and most importantly disrobing nations of their economics by privatizing the money supply and so do the menace for consumers.

All this reason came as a blow to the Libra leading to the quitting of partners in the Libra Association, a Facebook-led consortium of collective companies to serve the digital currency in upholding the volatility level through backing up with assets like dollar or euro. But the partners started to leave the association ranging from Mastercard to PayPal, eBay, Visa and most recently Vodafone as the worries mount.

And the worldwide notable’s personality has shown concern over the Libra and most importantly by the US senator: -

However, despite the raising concerns, Facebook's Libra still hold the potential for financial restructuring and innovation. Apart from APRA framework submission related to digital wallet, Bank of England too has shown interest in adopting bitcoin-based cryptocurrency and came up with a group of central banks to evaluate the possible pros and cons relying on digital money. The initiation of Libra has gathered eyes toward future possibilities. To untangle the financial complexity, banks official came together to pool the research on central bank digital currency (CBDC) potential.

Also, Libra is expected to create substantial employment and business opportunities under its global and massive consumer base. The opportunity is likely to be built in almost all the countries from developing to developed, primarily Switzerland, chosen Libra network operations by Facebook Global Holdings.

Facebook's Libra is seeing the site of hope with initiative toward the regulations, which can be the deciding factor for the world economic transformation.