One of the most modern mediums of exchange, cryptocurrency is a digital currency which has gained massive popularity with merchants and delivery sites deeming it as their payment mechanism option. Bitcoin, Bitcoin Cash, Ethereum, Ethereum Classic, Litecoin, Ripple are few examples of cryptocurrency.

Of this list, Bitcoin, perhaps the most innovative payment network, is one of the earliest forms of cryptocurrency that uses peer-to-peer technology. It works without any central authority or banks and is highly secured. Blockchain is Bitcoin’s main driver.

So, what’s driving this demand? The answer is relatively simple but much diverse - global uncertainty amid trade wars, lower bond returns, a high price to earnings ratio of a stock relative to interest rate and negative debt yield. The much recent tension between the US and Iran has only added to this list. 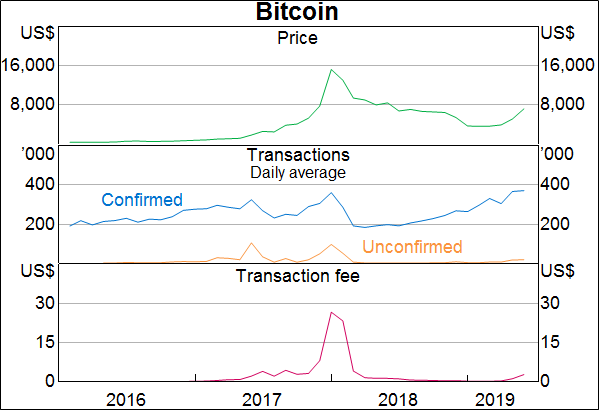 Bitcoin from the Investing Eye

In 2018, the bitcoin bubble led to a dramatic fall in prices from US$19,187.78 in December 2017 to US$3,193.78 in December 2018. However, post 2018, the world economy tumbled strangely, with falling interest rates, trade and technology disputes. This was the point wherein investors were on a dire lookout for safe-haven investment (other than gold).

In 2019, there have been few investors who have looked upon Bitcoin as an alternative to gold investment (calling it digital gold). This might be one of the reasons that the third week of January 2020 saw Bitcoin prices as high as US$8,681.53 per bitcoin.

The past few years have witnessed cryptocurrencies become universal. This has encouraged national as well as regional authorities to struggle with their regulation propaganda. The immense growth of cryptocurrencies makes it possible to gauge patterns that are arising and infer the outlook.

The two main ways of buying Bitcoin are to visit a cryptocurrency exchange and purchase it on the open market or find a Bitcoin broker and buy directly.

However, one should be wary about the element of risk which cannot be ignored. Risks are associated to noncompliance with taxation, uncertainties in the economy’s financial stability if there is a significant increase in the use of digital currencies, inherent price volatility and the pseudo-anonymity of digital currencies that make it vulnerable to be part of scams, hacking and criminal activities, to name a few.

Recently, Australian-based holding company for a micro-investment services group, Raiz Invest Limited (ASX:RZI) has been issued a relief to operate a Bitcoin retail fund by The Australian Securities and Investment Commission (ASIC). The multiple time accoladed company, launched in 2016, is Australia’s largest, mobile-first financial services platform. It was designed to catalyse investing and savings in and outside of superannuation (available on its website and App).

The relief fund is likely to be launched in the first part of 2020, and approximately 300,000 Raiz app users will be able to invest in Bitcoin.

It can be stated that investors whose risk appetite allows them to take a chance to gain over the market volatility can opt for bitcoin. Even though the current stance of Bitcoin seems to be surging, the long-term outlook is unpredictable, given the technology advancement in blockchain and competition creeping in, Facebook’s Libra is one such example.

Only time will tell if the Bitcoin revival period is back, or not!

Another thing to note, especially in these times where climate change has been affecting every aspect of a business, is the Australian bushfires. So why are we discussing bushfires and bitcoin? Because the crypto community can even turn to crypto donations - Food for thought?