Let us now have a detailed look at 4 ASX-listed stocks in the telecom space.

Chorus Limited (ASX: CNU) operates in the telecom sector and provide services across New Zealand. The company recently updated on the on-market acquisition of Chorus Limited bonds by Jonathan Peter Hartley, Director of the company. As a part of the transaction, 35,000 bonds were issued for a consideration of $36,957.45.

The company in another announcement updated investors that it has recently signed the 2019 Field Services Agreement with Downer EDI Limited for a period of 2.9 years. Under the agreement, Downer will provide field services and is expected to generate approximately $220 million in revenue. The contract includes the provision of network maintenance routines, reactive maintenance and provisioning services, cable locates and build services.

Financial Highlights of 1HFY19: During the half year ended 31st December 2018, the company reported a net profit after tax of $30 million as compared to $47 million in pcp. EBITDA for the period stood at $318 million against HY18 EBITDA of $329 million. Operating revenues for the period amounted to $489 million when compared to $499 million in the prior corresponding period. The company declared an interim fully imputed dividend of 9.5 cents per share. 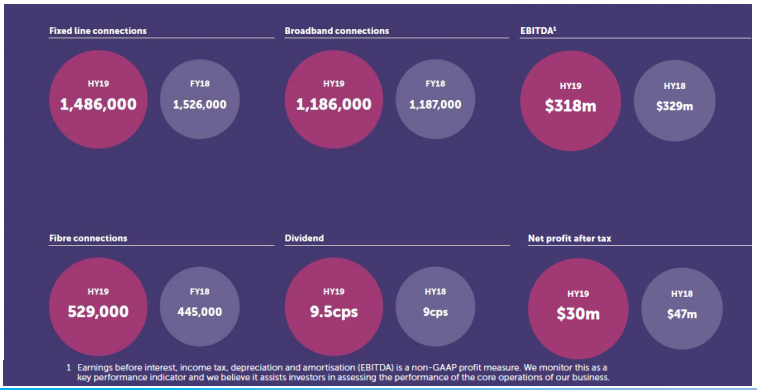 Outlook: On the outlook front, the company expects FY19 second half to set a new record for fibre demand. Moreover, Chorus aims to return to a modest EBITDA growth in FY20.

Market Update: In the recently released market update for the March quarter, the company reported a strong financial position with cash flow positive operations. The company’s cash balance increased to $1.6 million during the period despite ongoing product development costs associated with a range of soon to be launched new products. The company is well positioned to report improved FY19 full year results over the previous year.

The company has secured a new order of 5,000 Iridium GO! Devices and has also entered the Indian satellite device market with first orders worth US$250,000 received from Station Satcom. In addition, more orders from Iridium and Station Satcom are anticipated in FY20.

Key Financial Highlights: The company reported record first half performance with revenues amounting to $10.5 million, up 107% on the prior corresponding period. The period was marked by growth across all areas of the group’s business. Interim net profit for the period stood at $732,938 as compared to the prior corresponding period loss of $580,858. The strong results during the period were a consequence of the first order of the Thuraya WE dual-mode terminals and the shipment of 2.5k Iridium GO! devices. In addition, the company also benefitted from strong growth in the wholly-owned SatPhone Shop business. Interim revenues for the business grew at a rate of 35%. 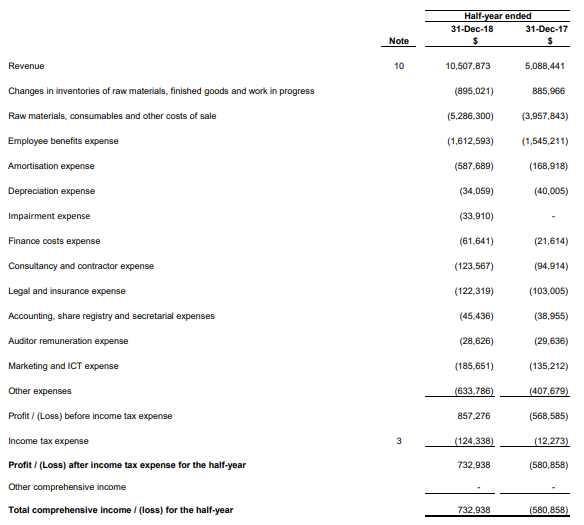 Outlook: Given the performance in the first half, the company looks on track to return to a positive net profit position in FY2019, owing to a recovery in sales and growing demand for its base products. However, the second half of the year will lack the benefit from a substantial WE (mobile app) order, as reported in the first half. The company is increasing investments to expand into new product categories, which will help the business to grow seamlessly in FY20 and beyond. The investments will assist the company in generating consistent earnings and help introduce new IoT and LTE solutions to enhance its current product portfolio.

The company recently updated that Canning Fok Kin Ning, one of the Directors, acquired 50,000 ordinary shares of CK Hutchison Holdings Limited for a consideration of HK$75.7613 per share.

Additionally, the company is recently flashing in the news regarding the proposed merger of Vodafone Hutchison Australia and TPG Telecom, which is currently being opposed by the Australian Competition and Consumer Commission. The proceedings have now been lodged with the Federal Court of Australia seeking orders that the merger will not have any effect of substantially reduced competition.

Highlights of Year Ended 31 December 2018: During the year, the company reported a profit of $4.5 million as compared to a loss of $37.6 million in the previous year. Revenues during the period amounted to $10.6 million against $6.2 million in the previous year. Growth in the revenues was predominantly driven by a full 12 months of interest on the June 2017 drawdown of $200 million and an additional March 2018 drawdown of $40 million.

Updates on VHA: In 2018, VHA (Vodafone Hutchison Australia Pty Limited) witnessed modest financial growth in an intense competitive environment. The company reached 6 million mobile customers during the year. The period saw a significant investment in network and technology, including the evolution to 5G. The company also announced its proposed merger with TPG Telecom Ltd and acquired 5G spectrum through Mobile JV Pty Ltd.

Outlook: VHA is well-placed to achieve steady, modest customer and financial growth with strong support from CK Hutchison Holdings Limited and its joint shareholder Vodafone Group Plc. It will continue to invest in its mobile and fixed networks, including the evolution to 5G with continued support from HTAL (Hutchison Telecommunications (Australia) Limited) in the future.

Macquarie Telecom Group Limited (ASX: MAQ) is engaged in the provision of telecommunication and hosting services to corporate and government customers within Australia.

Leadership Changes: The company recently announced the appointment of Adelle Howse as an Independent Non-executive Director. She holds more than 20 years of experience in corporate finance, strategy and M&A. In another announcement, the company notified that Helen Cox will join the company as CFO from 23rd August 2019. Earlier, in April 2019, the company appointed Michael Gold as the Company Secretary, effective 1st June 2019.

According to the recent market update, the company has issued unaudited FY19 EBITDA guidance in the range of $51 million to $53 million. The company also notified that the practical completion of IC3 East, part of the Macquarie Park Data Centre Campus, will move out to 2H CY20 due to delay in the planning and approval. The completion was previously planned in the first half of the year.

Segment Performance: Revenues from the telecom business was reported at $69.2 million, reflecting a decrease of $1.8 million on pcp. EBITDA for the segment stood at $10.2 million, representing an increase of $1.1 million compared to the prior corresponding period.

Revenue contribution from the hosting business amounted to $50.4 million, an increase of $6.6 million on the prior corresponding period. EBITDA from the segment increased by $1.9 million to $15.3 million.