The S&P/ASX 200 Information Technology Index closed lower by 1.56% to the current value of 1,330.6 on 28 June 2019. Let’s look at the following four Australian IT sector stocks with huge market capitalisation.

Technology One Limited (ASX: TNE), established in 1987 and based in Fortitude Valley, Australia, is engaged in the development, marketing, sales, implementation, support, and distribution of financial management and enterprise software solutions (SaaS-based). The company has operations in the United Kingdom, Australia, New Zealand, the South Pacific and Malaysia with 14 international offices.

The company recently presented at the Macquarie Emerging Leaders Forum and disclosed the presentation for the same. According to the information provided, Technology One has been profitable over the past 27 years. Its research & development centre is also one of the largest in Australia with over 315 developers.

With its business so far and market penetration, the company is strongly positioned to deliver long-term growth. 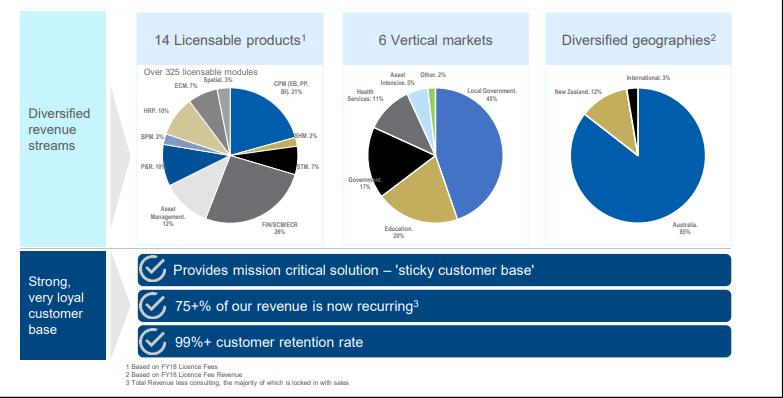 Financial Results- On 21 May 2019, the company released its half-year results for the six months to 31 March 2019, reporting that its SaaS business continued to flourish with 42% growth registered by the SaaS Fees Recognised to $ 37.5 million. SaaS Annual Contract Value (ACV) stood at $ 85.8 million in H1 FY19, also up 45% as compared to the prior corresponding period (pcp). 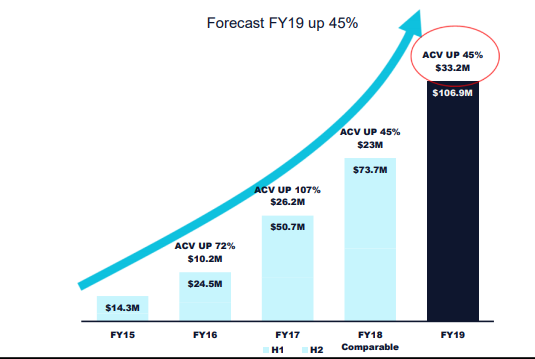 Business- Its solutions are used for purchasing apparel, automotive parts, personal care products, shoes, watches, food items, beverages, and many other varieties of products. The company enables leading retailers to offer a ‘buy now, receive now, pay later’ service under the name Afterpay, while its Touch business offers digital payment solutions to consumer-facing organisations in the telecom, health and convenience retail sectors, internationally. The company serves an active base of more than 4.3 million customers and nearly 30,600 retail merchants.

Share Purchase Plan (SPP) announced on 11 June 2019- Afterpay Board has informed the stakeholders that it would not progress with the SPP, as it believes it to be in the best interest of the shareholders until the company studies the final audit report and considers its recommendations thoroughly.

Regardless, the SPP’s record date would remain 7 June 2019 (7:00pm (Sydney time)) with a cap of $ 30 million. Under the SPP, Afterpay intends to issue shares at the lower of $ 23.00, being the placement price, and the five-day VWAP of Afterpay shares up to the SPP closing date. Further update would be provided shortly.

The third update was that the co-founders Anthony Eisen and Nick Molnar have declared that the company would not sell any shares during the next financial year 2020 (FY20).

Financials- As per the company’s recently released Investor Presentation, there has been a growth of ~143% in underlying sales to $ 4.7 billion with over 4.3 million active customers as of the 11 months to 31 May 2019. A snapshot of the key business metrics for the concerned period is as follows- 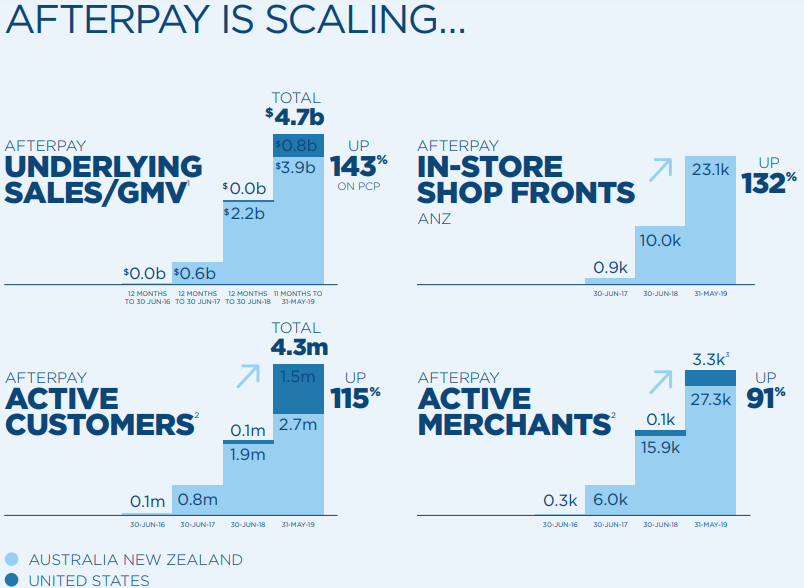 WiseTech Global Limited (ASX: WTC), based in Alexandria, Australia, is engaged in developing and providing cloud-based software solutions to the global logistics industry, as it simplifies the movement and storage of goods and information for clients including multinationals and medium and small-sized regional and domestic enterprises. Its flagship product is the single-platform CargoWise One. 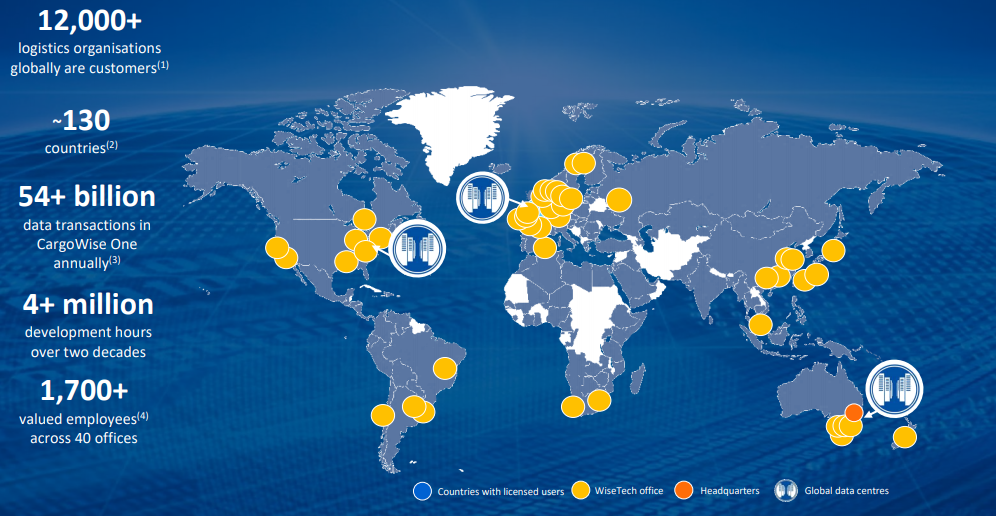 Share Purchase Plan – The company has completed its share purchase plan (SPP), as reported on 15 April 2019, raising ~ $ 35.9 million, with approximately 1.7 million new fully paid ordinary shares to be issued to successful SPP applicants at $ 20.90 per share.

Catapult Group International Ltd (ASX: CAT), established in 2006 and headquartered in Prahran, Australia, is engaged in the development and commercialisation of wearable athlete tracking and analytics solutions to customers like sports teams, institutes and universities worldwide. With a market capitalisation of AUD 210.04 million and approximately 190.9 million shares outstanding, the CAT stock price settled the day’s trading at AUD 1.095 on 28 June 2019, down 0.905% by AUD 0.010, with ~ 227,962 shares traded. In addition, the stock has delivered positive return yields of 43.51% for the last six months.

Vector Soft Launch- Recently on 5 June 2019, Catapult Group International provided a progress update on the limited “soft launch” of its next-generation wearable technology, Vector, which is based on Catapult’s proprietary ClearSky technology. The launch was initiated in May 2019 to a small number of Australian teams, which shared an affirmative feedback. As a result, the company is expanding the soft launch in the markets of United Kingdom and the United States.

Board Governance Update- The Board of Catapult Group International announced an update on 30 May 2019 with respect to its ongoing process to ensure the governance structure of the company is consistent with its much larger aspirations. In line with the objective, the Board has expressed its intention to appoint an additional Independent, Non-Executive Director prior to the end of calendar year 2019, subject to identifying and recruiting a suitable candidate.

On 10 April 2019, the company informed that the National Rugby League (NRL) has awarded it with an aggregated contract. With this new win, the company has positioned itself as a technology supplier to NRLW Clubs, NRL Clubs, representative teams in Australia and match officials.

The three-season term contract has a performance-based option, which might result in the extension of the contact by further two years. It follows similar past deals of the company with the AFL Women’s (AFLW), Australian Football League (AFL), National Basketball League and other Australian leagues.

Catapult Group International’ business has a large addressable market as depicted below.