Afterpay Touch Group Updates On AUSTRAC And Its AML/CTF Program

Afterpay Touch Group Limited (ASX: APT) is a technology-driven payments company from the information technology sector which aims to make the purchasing experience of its global customer great. The company allows leading retailers to offer their customer with the service of “buy now, receive now, pay later”. Thus, the end customers are not required to enter any loan or make an upfront fee or interest to the company. The company has over four million active customers and upwards of 30,000 active retail merchants are on its platform. 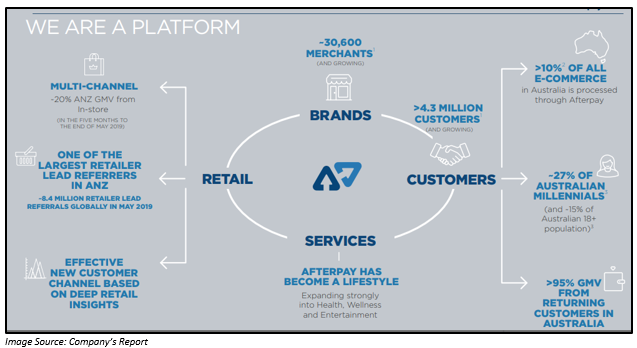 On 13 June 2019, the company provided an update related to the important developments with respect to AUSTRAC as well as its Anti-Money Laundering/Counter Terrorism Financing (AML/CTF) program.

Anti-Money Laundering is the set of rules and regulations that are set in order to prevent criminals from hiding the funds obtained from the illegal sources as genuine income.

On 12 June 2019, Afterpay Pty Limited, the subsidiary company of Afterpay Touch Group Limited, received a notice from AUSTRAC (Australian Transaction Reports and Analysis Centre) during the evening that it needs to appoint an external auditor who would be authorized by AUSTRAC for carrying out an audit in respect of its Anti-Money Laundering/ Counter-Terrorism Financing (AML/CTF) compliance.

The notice issued by AUSTRAC to Afterpay Pty Limited is as per section 162(2) of the Anti-Money Laundering and Counter-Terrorism Financing Act 2006 (Cth). Under this act, the external auditor would be focusing on key areas on over the period from 19/1/ 2015 to date in preparing the audit report. The notice also provides a guideline on timeframe within which the audit process is to be concluded. The completed version of the audit report is expected to be provided to the regulator – AUSTRAC within 120 days upon the appointment of the external auditor.

Further the company stated that it is firm on meeting the expectations of its retail partners and customers. Since inception the company has gained the trust of millions of customers to transact on its platform.

Also, the company stated that the “Buy Now Pay Later” segment is catching the attention of not only the customers but regulators as well. The company would be working with the regulator to formulate a leading compliance scheme that would be specific to APT’s business. Other than this, the company has taken measures to put a check on money laundering as well as terrorism financing risk. Other than this, the model also has a maximum per transaction limit of $1,500.

Multiple steps have already been taken by the company to reinforce its Anti-Money Laundering/ Counter-Terrorism Financing framework, which includes the focus areas as mentioned in the notice.

The notice provided by AUSTRAC to Afterpay, includes:

Afterpay would continue to invest in the enhancement of the AML/CTF compliance.

On 12 June 2019, the company also released an announcement where it provided an update related to its capital raising. The company has raised $317.2 million through fully underwritten institutional placement. The placement received strong support from the existing as well as new shareholders. A total of 13.8 million ordinary shares were placed at $23 per share. Shareholder approval is not required for this share placement and the company notified that the settlement of the placement is planned to occur on 14 June 2019, with the shares to go on trade on 17 June 2019.

Other than this, the company would also be providing an opportunity to the existing shareholder to purchase new shares in Afterpay under the share purchase plan (SPP) which will be issued at the lower of $23 which was the placement price and also 5-day VWAP of Afterpay shares up to the closing date of the share purchase plan. The company via the SPP aims to raise approximately $30M.

As part of its secondary sell down plan, the company announced that Anthony Eisen, David Hancock and Nicholas Molnar have sold 2.05m,0.40m and 2.05m respectively to two US investors Woodson Capital and Tiger Management at $23.00 per share. The three investors have confirmed that they do not have further intention to sell their remaining shares at least for the next 120 days from the announcement of the placement.

In the recent Investor presentation release of the company on 11 June 2019, the company provided a global business update highlight. 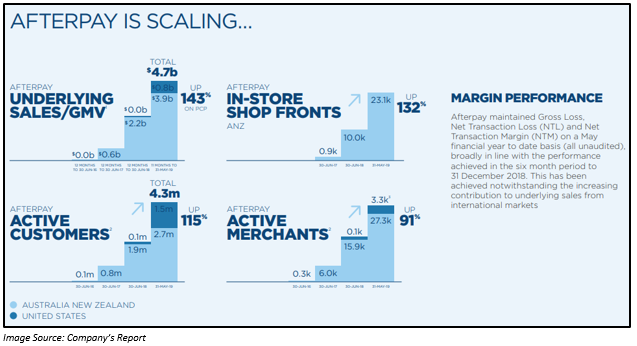 US: In the US, the company continues to grow strong. There were more than 1.5 million active customers and ~ 3,300 active merchants along with further 1,100 integrating merchants as at 31 May 2019.

UK: The company completed a ‘soft test’ in the UK market which is now live under the name Clearpay.

The shares of APT has generated an excellent YTD return of 113.67% and it has been in a good upward momentum in the past 3 months with a returns of 23.57%.