Catapult Group International Ltd (ASX: CAT) is engaged in the development and sale of wearable tracking solutions and analytics. It provides software and video analytics solutions for athletes and sports teams.

On 5th June 2019, the company made an announcement to report the progress on the soft launch of its wearable technology, Vector. Catapult was encouraged to expand the soft launch of Vector after a positive response from initial clients in Australia. The soft launch commenced in May 2019 to few of the Australian teams.

Vector is one of the most significant wearable product of Catapult to-date, involving five years of research and development. Vector is a device that provides the greatest degree of versatility. In one session, Vector uses Catapultâs proprietary ClearSky technology to move indoors and outdoors for combining data collected from the Global Positioning System and Local Positioning System technology. The user can toggle between GPS turbo, stadium systems and traditional satellite connections by combining GPS and LPS into one. It can even help in running a session via Bluetooth directly on the usersâ mobile phone.

The new Vector unit of Catapult will act as a game changer in the industry by delivering a more advanced level of analytics with specialised live feeds and reporting formats. The product is valuable for usage in outdoor sports played periodically in challenging stadium environments or under closed roofs, such as Australian rules Football and Rugby. American football teams that spend ample time in both indoor and outdoor facilities will also be benefitted from the product. Vector is 20% smaller that Catapultâs existing OptimEye device and offers five-times the processing power. The product fully complies with the FIFA and World Rugby standards. The product is also popular among individual athletes for the purpose of monitoring their own data during a rehabilitation session or within a small group, in real time or on smartphones.

On 30th May 2019, the companyâs Board updated the market on the process to ensure the consistency of governance structure with its aspirations. Evolution of the Board is anticipated on the back of fulfilling the diversity and skills required for the next phase of growth of the sports technology business. As a result, the Board resolved to appoint an additional Independent Non-Executive Director before the end of CY2019. The above step will add another independent voice to the Boardâs decisions towards the growth ambitions of the company. The involvement of the Founder at the Board level is also important as the company approaches $100 million in revenue with a focus on group cash flow breakeven. However, Catapult has matured enough to not to have Founders as Executive Directors. Co-Founders Igor van de Griendt and Shaun Holthouse have requested a transition to the role of Non-Executive Director.

According to an announcement released to the exchange on 10th April 2019, the company signed a contract with the National Rugby League and will supply technology as part of terms of the contract.

The financial performance of the company for H1 FY19 was characterised by high subscription growth and high margins. The companyâs global elite business is growing rapidly reflected by a client base comprising over 2,100 organisations (up 300 since June 2018) and 2,500 teams in 137 countries and 21 sports along with notable signings and expansions. Subscription software is at the heart of the core elite business and has helped drive most of the revenue and growth. Revenue for Elite subscription as a percentage of total elite revenue was 73%.

During 1H FY19, Catapult reported revenue of $43 million, an increase of 32% on the prior corresponding period (1HFY18: $32.4 million). The higher contribution from the capital revenue was backed by a $1.4 million increase in Prosumer sales. The operating expenses during the period grew 8% as compared to the prior corresponding period. The employee expenses rose 13%, which was largely driven by the investment in sales and marketing. The group cash receipts from customers amounted to $55.5 million, representing an increase of 22%. During the period, the company invested $5.3 million in research and development to fuel future growth. 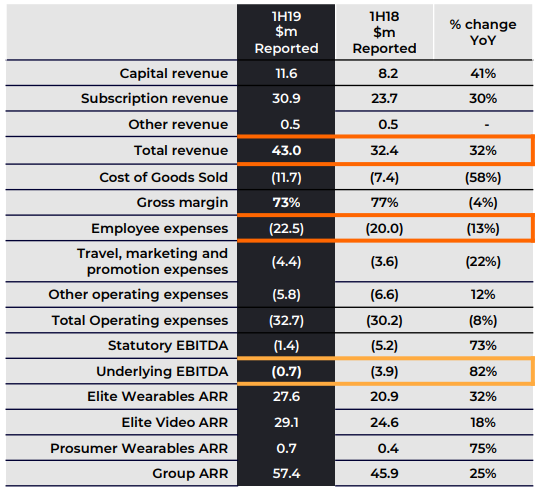