Before investing in the market, every investor experiences a major conflict between choice of class of investment like large cap, mid cap and small cap. As small cap company possesses relatively more risk in comparison to large cap and mid cap. But investing in small cap also provides opportunities to grow the wealth with the growth in the company over long-term period.

In the below article, we would be discussion the three small payers on Australian Stock Exchange such as Cann Group Limited, CannPal Animal Therapeutics Limited and Exopharm Limited.

Cann Group Limited (ASX: CAN) is involved with growing cannabis for solving the purposes like medicinal and research work. The company is also in the manufacturing of medicinal cannabis products.

The company together with IDT Australia Limited (ASX: IDT) through a release announced that the first commercial medicinal cannabis product, which is to be produced from the cultivation operations of the CAN has been packed by IDT under cGMP conditions. It was also mentioned that this would undergo stability testing ahead of release in the Q1 CY20.

Agreement Between CAN and IDT

In another update, the company announced the appointment Ms Geraldine Farrell as Company Secretary and Ms Reena Dahiya as Acting Chief Financial Officer, which became effective on 6th December 2019.

As per the key personnel of the company, during FY19, the company continued to make investment in important research which would support advancements in its genetics program. The company has also wrapped up 51 successful harvests at its Northern and Southern facilities.

CannPal Animal Therapeutics Limited (ASX: CP1) is involved in the research and development of the products related to animal health.

As per the key personnel of the company, CP1 has wrapped up phase 1 of its research for CPAT-01, which happens to be its leading pharmaceutical product. The company was also delighted to receive acknowledgement by its peers with the acceptance of its first research abstract for publication. The vision of the company revolves around being a leader in the development of therapeutic products for companion animals by using plant compounds derived from the hemp and cannabis plant.

For the quarter ended 30th September 2019, the cash balance of the company stood at $2.78 Mn with operating outflows amounting to $519,000 for the period, with $370,000 related to the costs associated with the research and development of the CP1’s lead pharmaceutical as well as nutraceutical drug candidates.

Exopharm Limited (ASX: EX1) is a biopharmaceutical research company having primary focus on developing and commercialising exosomes as therapeutic agents. The company recently announced, that it has extended the employment of Dr Ian Dixon on the role of Managing Director and Chief Executive Officer. The PLEXOVAL study of the company places EX1 in a leadership position in the exosome field internationally. This study of the company has been modified in order to prioritise Cohort 2 over Cohort 1, wherein Cohort 2 involves up to 5 participants.

The net cash used in the operating activities of the company stood at $1.566 million after making major payments such as research and development and staff costs amounting to $0.685 million and $0.612 million, respectively. 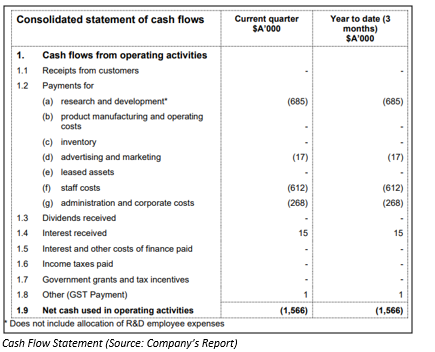