On 29th January 2020, the benchmark index S&P/ASX200 was trading in green with a rise of 0.6% at 7038.5 points (at AEDT 3:33 PM). In the below article, we will look at the performance of two metals and mining companies such as Saracen Mineral Holdings Limited and Nickel Mines Limited that have updated the market with their activities for December 2019 quarter period.

Australia based Saracen Mineral Holdings Limited (ASX: SAR) is engaged in the mining of gold, processing & sales and exploration of mineral. The company was officially listed on Australian Securities Exchange in 1989. The company recently announced that Mitsubishi UFJ Financial Group, Inc. has ceased to be a substantial holder in the company, effective 27th December 2019.

On 28 January 2020, SAR notified the market with the report of December quarter for the period closed 31 December 2019 and outlined the following:

For the period, the company reported quarterly gold production of 120,127 ounces with an AISC (All in Sustained Cost) amounting to $1,098 per ounce. Moreover, at Thunderbox, the company experienced record quarter with production noted at 46,594 ounces as the C Zone open pit mine reported higher grade / lower strip ratio ore as per the plan of the company.

SAR added that the Carosue Dam has experienced the production of 52,899 ounces and KCGM produced 20,634oz for the month of December 2019. 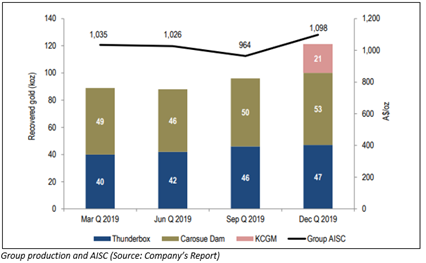 Australian public entity, Nickel Mines Limited (ASX: NIC) is engaged into nickel mining with a focus on becoming a globally significant, low cost producer of nickel pig iron, which is a key ingredient in the production of stainless steel.

The company recently announced that BlackRock Inc. and subsidiaries made a change to their substantial holdings in the company on 14th November 2019 and BlackRock’s current voting power stands at 8.32% as compared to the previous voting power of 9.93%.

Also, NIC on 28 January 2020, notified the market with the activities of the company during the December quarter for the period closed 31 December 2019 and outlined the following:

On 29 January 2020, NIC provided an update to the market in concurrence with Shanghai Decent (its operating partner) with regards to address the concerns on the eruption of the Wuhan Coronavirus and conjecture of its effects on NIC’s RKEF operations at the IMIP or Indonesia Morowali Industrial Park in Sulawesi (Indonesia).

The update comprised of IMPI executing stern access controls to itself from 26 January this year. All non-Indonesian are at present barred from entering IMPIP unless special situations needs their admission. Also, rostered leave for the Chinese employees has been suspended at present.