Due to the unique ability of rare earth elements related to magnetic, electrochemical and luminescent attributes. These are also used in tech appliance to reduce the weight, and energy consumption. Besides, the rare elements are used in wind power generations, hydrogen storage, rechargeable batteries etc.

Further, Rare Earths are utilised as phosphors in numerous consumer displays and lighting systems such as television, LED and more. In the defence sector, the usage of the elements extends in laser tech, communication systems, airframes and aerospace engines, radar systems, optical equipment, sonar etc.

Lynas Corporation Limited is a Metals & Mining company, focused on the exploration and development of rare earth elements. The stock of the company is constituent of S&P/ASX 200, S&P/ASX 300, S&P/ASX 200 Materials (Sector) and more.

Lynas Tackling Malaysian Issues: According to media reports, the environmental group in Malaysia have been protesting to ensure the country’s government promise to shut down the processing plant. The protests emerged again after about 88 different non-government organisations declared the new campaign to hold Lynas responsible for the nation’s massive radioactive waste problems.

Reports suggest that a decision is anticipated by mid-August on LYC’s appeal related to new conditions levied on the processing plant in December. As a result, Lynas might need to export the radioactive waste, or the license would not renew going forward. Besides, the company had reported a plan to extract radioactive waste in WA prior to being exported to Malaysia for additional processing.

Accordingly, the reports also suggest that Lynas has misled the country through undertakings to eradicate radioactive waste from Malaysia. Meanwhile, in 2011, WA had clarified that the waste could not be accepted back to the country.

The protestors argued that close to half a million-tonne waste were lying at the storage dams, which contaminates ground water and the surrounding environment. Besides, the concerns have been raised by the people of Kuantan as well.

Recent Updates: On 18 July 2019, the company had reported that the quarterly results for the period ending 30 June 2019 would be released on 29 July 2019. Besides, the MD & CEO of the company would host a briefing session for shareholders and analysts as well.

On 16 July 2019, Lynas Corporation reported that the Lynas Malaysia had completed one year as ‘lost time injury free’ as of July 2019. Accordingly, it was asserted that the company’s highest safety standards and operational excellence led to such a result.

As per the release, the company was awarded a gold medal CSR rating by EcoVadis, and it ranked within the top 5% based on performance regarding the environment, labour and human rights, ethics and sustainable procurement. Besides, the National Institute for Occupational Safety and Health (NIOSH) awarded ISO recertification to Lynas Malaysia, which is an accredited certification body in Malaysia:

March Quarter Report: On 16 April 2019, the company released the quarterly activities report for the period ended 31 March 2019. Accordingly, the receipt from the customers stood at A$88.2 million, cost of production was recorded of A$53.1 million and administration, overhead and other payments were at A$9.1 million. Subsequently, the total operating cash flow was noted of A$26 million.

Besides, total investing cash flows were - A$76 million, which was related to the developmental capex representing an increase in mining activities during the quarter. Further, the cash flows from financing witnessed an outflow of A$4.7 million, and this was related to A$4.4m principal repayment was made in January 2019 related to JARE loan facility. 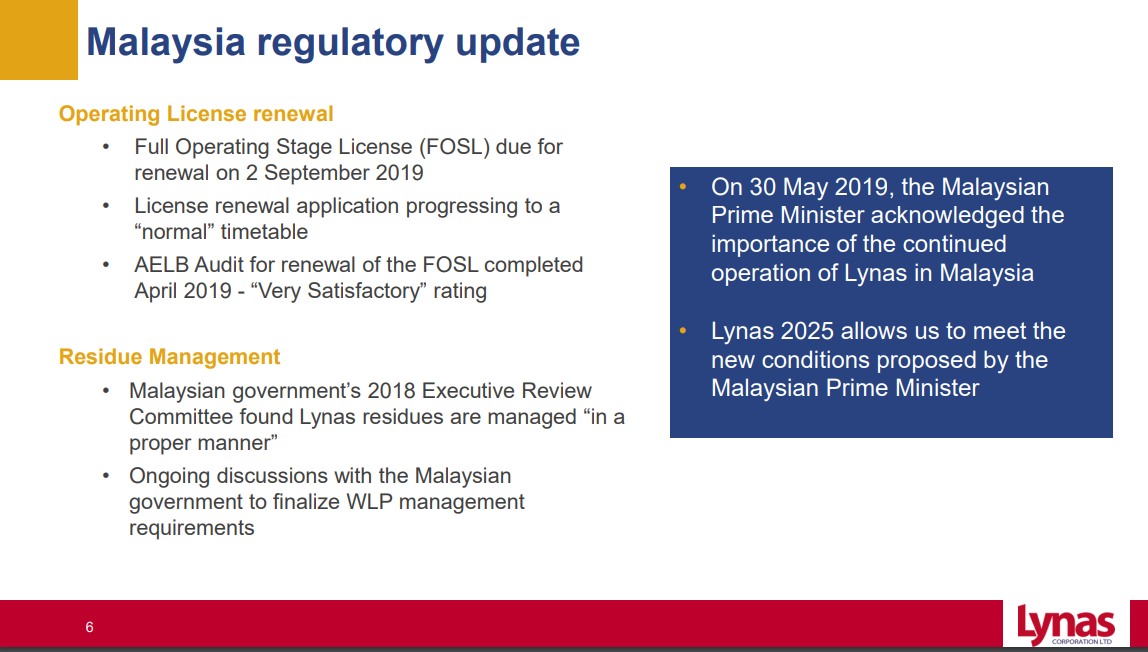 As per the release, the company produced 1,591 tonnes of NdPr out of which 600 tonnes NdPr was produced in March, and the total REO production stood at 5,444 tonnes. Also, Lynas also produced and sold the first separated Pr. Besides, a successful laboratory test led to a higher dysprosium and terbium content from Duncan Ore.