Palladium Prices to Correct or Momentum Strong Enough to Sustain?

The momentum seems to firm up, as the prices are anticipated to increase further due to the supply deficit. On a macro economic front, palladium has kick started 2020 on a positive note, with the easing of US-China trade dispute with phase1 deal and positive sentiments toward the Chinese economy.

Palladium surge in Price since 2018

Interestingly, it is worth mentioning that at the time, positive anticipation by the investor about the global economy has compelled precious metal prices to fall from its previous trading value except for palladium. Example: Gold price fell by ~0.6% on 17th January 2020 to USD 1553.37 per ounce.

Why has Palladium prices increased with positive global outlook?

The palladium turnaround happened due to the stimulated demand coming from stricter emissions norms in most of the countries, especially China forcing car manufacturer to use the metal in autocatalysts. Almost 85% of palladium requirement comes from the automotive industry where it is used as a catalyst to clean car exhaust fumes: -

However, one question may always arise in how the demand for palladium is increasing despite falling global vehicle sales? Even Renault group announced a fall of 3.4% in worldwide vehicle sales.

This is because palladium price rally is not due to the demand but because of tighter supply of the metal in the market as shown below: -

Palladium is generally produced as a byproduct of Platinum or Nickel-metal concentrated mainly in South Africa and Russia. South African major producing mines such as Marula, Mimosa and Two River of Impala Platinum have witnessed the drop of production by 3.2Koz, 2koz and 11koz respectively in FY2019 compared to FY2018. Similarly, Anglo American Plc – a British MNC with PGM's mines in South Africa has reported 25koz drop in nine months production as of September 2019 in comparison to the previous year.

Is the supply expected to seat on the side of the deficit?

Yes, supply is expected to remain on the deficit side. Many countries have started to mine due to price surge and began to recycle palladium metal for supply recovery to meet the demand. As per Norilsk Nickel – a Russian mining company estimates inventories release to increase by ~2% to 10.6 Moz in 2020 (as against 2019) whereas supply deficit to increase by ~3.3% to 0.8Moz in 2020 from 2019. 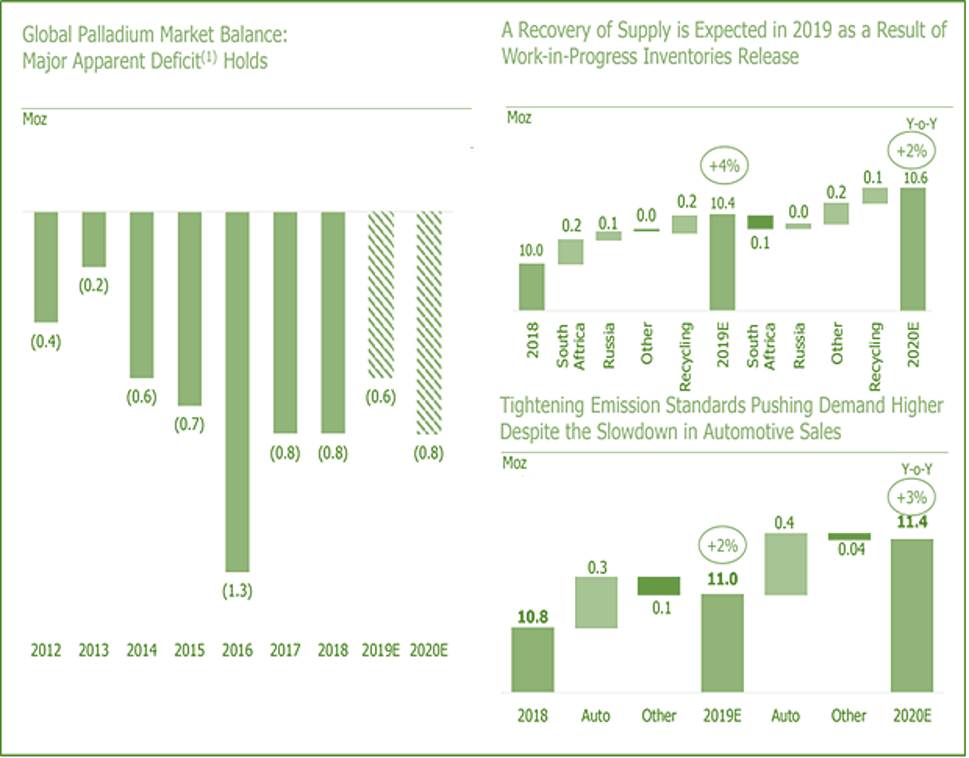 From above its clear that the Palladium is expected to be on supply crunch side with demand rising by 0.4Moz and supply compensating only 0.2Moz of the demand surge in 2020 from 2019. Hence adding 0.2 Moz of deficit gap to already mismatch of 0.6Moz in 2019.

Is Palladium price a bubble expected to burst in future?

The palladium price rally will burst only in three conditions, i.e. Supply meeting the demand, use of other metal in catalytic converter and wave of Electric Vehicles.

However, it is pertinent to mention that palladium being soft and malleable is generally spread as a thin sheet in the converter to increase the overall surface area for better effectiveness due to the improved reactions. But surface areas reduce in time due to the sintering effect. Therefore, the automobile manufacturer is required to use a thicker layer or replacement of the catalytic converter is expected before the life span of the vehicles. In either case, the palladium demand is expected to remain high in the near future.

The Electric vehicles commercialisation is inevitable but would require some time as even China’s aim of 60% sales of vehicles running on the electric motor is not near but 2035. Therefore, palladium is expected to rejoice its high prices for some time in future before correcting post fall in demand.